Three hours before her 8 a.m. classes begin, senior Mya Shiloh is already on her way to San Jose’s Lincoln High, nestled into her favorite seat on the morning’s first ACE commuter train and trying to grab a few winks after waking up at 4 a.m. at her home in Tracy.

She’ll be back on the train by 3:30 p.m., and home more than 12 hours after she left. Her schedule cuts into activities she loves, including school clubs and drama, as well as socializing and sleep – but it’s the price she’s chosen to pay to stay in her beloved high school after rent hikes priced her family out of San Jose.

Mya, 17, is among thousands of schoolchildren who have been uprooted by the Bay Area’s high housing costs, and one of a small but growing number who embark on long daily commutes this month as they go back to school. 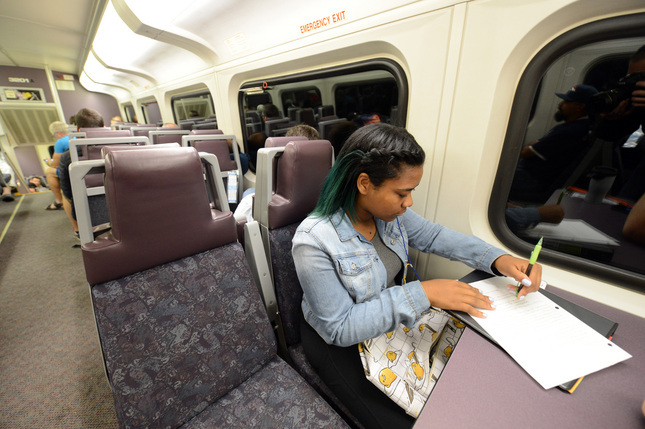 But later on in the article:

“I make six figures,” said Mya’s mother, Cammie Farmer, 34, a single mom with four other children. Three years ago, she downsized everyone into a two-bedroom apartment in San Jose, going for $1,800. When the rent went up by $300 last year, she realized, “I can’t keep living here.”

She moved to Tracy, where she pays nearly as much – $2,000 – but has a 4-bedroom home with a yard. Initially, she commuted with her five kids, to keep Mya at Lincoln, three younger kids in a Campbell elementary school and the 2-year-old with his San Jose grandmother.

After half a year, with everyone exhausted, Farmer enrolled the three elementary students in Tracy schools – waking them with a 6:30 a.m. phone call and monitoring their morning and afternoon routines via iPad during her commute to and from work.

The mother wants a bigger house, not saving money on rent. I don’t think I’d have made the same choice. Her daughter is almost done with high school. Why force her to do this crazy commute now, and sacrificing time and energy where she could have studied in the critical year before college?

Just read this today myself. It goes back to my earlier post about fad stories.

I hate that. People make choices in their lives. Economics is a part of that. These people chose this lifestyle for a variety of reasons. The “high” cost of housing is only one of them. For instance, in this case there are local schools. There are also local jobs, albeit lower paying.

Besides. This woman makes enough to live in the Bay Area. Just not where she wanted to live. So she cuts here nose off to spit her face and moves completely out of the BA. Illogical as far as I’m concerned.

She makes twice the median household income of the BA cities I currently reside in. There are many more like it.

Look at buyinghouse. He came here and lived for 20 years or more in the shadows of undocumented residency. But, he chose to live however he had to so he could stay. And, he dedicated his efforts to changing his status to full fledged citizen. Which he recently did.

If he were like all the “victims” portrayed in these articles, he could have gotten front page coverage and cried about how things were unfair here and he was being denied his rights instead. But his energies would have been wasted and he wouldn’t have achieved his goal.

Tracy has high schools. I admire her commitment to stay at a one of the better schools in the area. But if you are committed to learning, you can learn at any school. If she is willing to do a 70-mile commute for her education, she would likely do just fine in a Tracy high school.

I have several friends that went to high school in a low rated school in Modesto. They went onto good UC schools. One is an MD now, the others have BS degrees and are doing fine.

If she is willing to do a 70-mile commute for her education, she would likely do just fine in a Tracy high school.

I suspect the kid will actually do better had she gone to a local high school. Marathon commute is very exhausting, and she’s in the most vital year of her high school career.

I fully agree we have affordability issue in the Bay Area. But sob stories like these don’t really address the problem. The mother chose to move to Tracy for a bigger house, not to save money. And the kicker is that she’s still renting in Tracy! Maybe she has her own reasons, but I don’t think I would have made the same choice.

if she actually studies on the train, then I suspect it’s not that bad besides getting up so early. But how are they keeping here there if they are no longer residents? Is there a residency exemption for economically displaced families?

School districts can “exchange” students. There are forms you fill in and it’s school district specific. In her case since she’s already a student there I doubt anyone will say no. Except maybe Cupertino and Palo Alto? Otherwise that would be a sweet loophole. Rent in PA for a year and then move across the freeway to EPA?

And, there are many other “tricks”.

When the new HS in Antioch (Deer Valley) opened years back, it quickly filled up with non-residents from Oakland who were commuting in. 4,000 students on that campus. A city unto itself.

People assumed because it was new, it was “better” than their local HS in Oaktown. So, they used all sorts of schemes to get their kids enrolled.

But, along with the Oakland crowd came Oakland problems. At that time, no one in Antioch knew what a drive by shooting was. But, they soon learned.

It was very controversial and resulted in a lot of back and forth on the issue. It doesn’t seem as prevalent today as it did back then. But that might be because so many people from Oakland moved to Antioch in the interim.