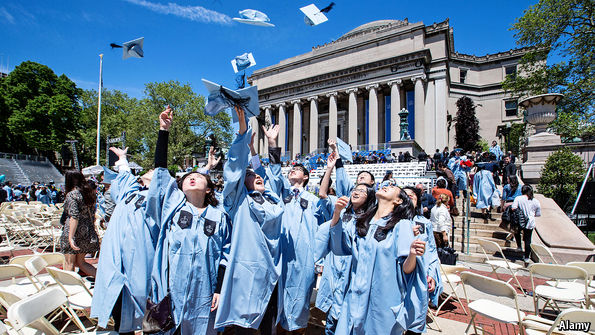 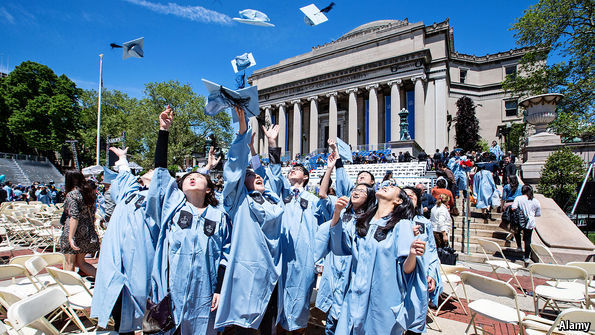 EVERYONE knows that Chinese students are flooding American campuses. Less widely known is that their mothers are coming, too. Last year 394,669 pupils from China were studying at American universities, secondary and primary schools, the largest contingent of all international students. Increasingly their parents are moving in with them, buying local properties or investing at least $500,000 in businesses to try to qualify for a green card.

The tiger mums usually come to America alone, leaving their husbands behind. “When I wasn’t here, my son would survive on instant noodles and energy drinks for several days without eating fruit or vegetables,” says Wenxue Hu, mother of a masters student studying applied mathematics at the University of Pennsylvania. She gave up her job as a corporate finance director in Shenzhen to cook for him in Philadelphia. Through a local church she met other Chinese tiger mums, most of whom entered with a tourist visa that allows them to stay up to six months each time. New Haven, Connecticut now boasts a “Yale Chinese grandparents’ village”, with 15 residents. The old folk live under the same roof as their children, mostly PhD and post-doctoral students at Yale who are too busy to take care of their own offspring.

What’s wrong with these brats? Moms have to quit their jobs to cook for them?? Weak sauce.

Ah, the age old saga of wanting to make the sacrifices so that your whole family will one day benefit in the end… Sounds good anyway or these mums really hate being around the dads…

And people wonder why Asians in general in the US excel in academics - under a parents watchful eye night and day will do that.

And people wonder why Asians in general in the US excel in academics - under a parents watchful eye night and day will do that.

They may do well in exams, but brats like these will never be great business leaders or innovators. If that’s the norm I worry for China.

Come on, Manch, taking the Warrior loss a little too hard, no?

I think you are painting too broad of a stroke. Don’t be offending folks who try to come here for a better life. At least they are trying. Not everyone is meant to be “great business leaders or innovators.” I can not imagine how hard it would be to go to a foreign country where you don’t speak the native tongue well but yet you push on with your goals. Always keep in mind that some folks literally have nothing or came literally on a raft. I know some of these people. One ended being an extremely well known and well respected businessman whose products you see in major stores everywhere.

I just think the moms are keeping too tight a leash on their kids.

Parents need to learn how to let go. Otherwise their kids can’t and won’t grow up. If the kids are too lazy to eat properly and choose to sustain on instant noodles? That’s fine. That’s what being young is all about.

I know some people who came to US with very little, worked hard, fought, and made it. I was sorta like that. My mom could not afford to come with me, even if she really wanted to.

Imagine if Mark Z was living with his mom at Harvard? I don’t think his mom would let him work on such a frivolous think called “The Facebook”. Being young allows you to experiment. Living with your parents doesn’t give you that opportunity.

We are learning to cook this summer.

So far my 8 year old has made on his own (except that I clean up after him):

the 5 year old assembled a pizza with some help rolling the dough (but she’s been doing that for months) and made a dessert of home-made whipped cream, sliced strawberries (using the egg slicer) and blueberries. She made dad’s eggs with feta for father’s day.

I’d say my kids are doing better than these college students.

They may do well in exams, but brats like these will never be great business leaders or innovators. If that’s the norm I worry for China.

Those brats are fuerdai who would lose all their inherited monies pretty fast. No worries, there are many Jack Ma, Robin Li and Ma Hua Teng, and younger upstarts like Jean Liu, Chen Di, Jiang Lei and Shu Yi (not shu-qi). 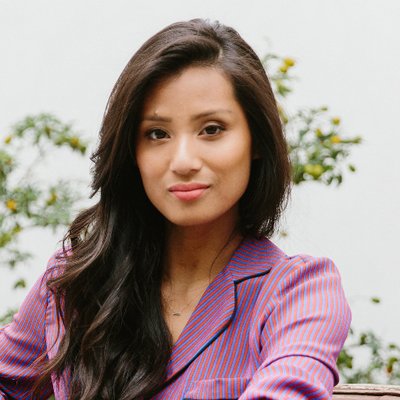 Wow! Your 12 year old is better than me.

My kids love cooking(french toast, Pasta etc) but is is always me who is hesitant because of the mess I have to clean up afterward. I think I should let them try more.
When I was young (middle to high school), I spent almost every single minutes on study while I was awake and honestly, I didn’t even have a though about cooking or any other household chores. (My parents didn’t push me on study but never ask me to any household chores.)
Then, I got married and started to learn how to cook from cookbooks and internet recipes.
Well, cooking is still much more challenging and exhausting to me than coding.
I end up having bad headache if I need to cook three dishes at the same time for guests.
I think I should spend more time in teaching my kids how to cook (or learning with them).

Maybe they are just eating straight out of the box?

Wow! Your 12 year old is better than me.

My kids love cooking(french toast, Pasta etc) but is is always me who is hesitant because of the mess I have to clean up afterward. I think I should let them try more.

I agree they can be a bit messy, but since I’m cleaning up anyways, I figure if they’ve done the cooking, it still saves me a bunch of time! I think there are also ways to teach them to be less messy–I encourage pouring over the mixing bowl. I also put a thin rug down underneath where they’re mixing that will catch spills onto the floor. Early on there’d be sugar and flour and stuff everywhere. Now mostly what’s on the counter is the batter that flowed over the side of the mixing bowl when they poured.

Cooking for guests is an art! I think the biggest tip I learned is that the best thing to do is to choose either

The one thing you don’t want are recipes that take a lot of prep right before being served because that gets out of hand.

Also, I’ve found having a sous-vide to be amazingly useful (temperature controlled water-bath cooking). I haven’t had meat come out undercooked since I got it. Not only can you thaw meat within an hour, but you can cook the meat to whatever you want the inner temperature to be (I do 140 for pork and chicken, 130-135 for lamb and beef), and then you simply coat it with something like rosemary/salt/oil and pop it in the broiler for 2 minutes a side. It makes cooking soooo fast. And you can turn it on the in morning and come back after work and then it only takes like 10 minutes to cook a meal.

Maybe they are just eating straight out of the box?

Maybe you’re right manch. Maybe they’re just eating granola bars/cereal bars now and drinking the milk from a cup. Perhaps more people are eating in the car on the way to work and that’s the better way to go.

[Edit: They’re drinking the milk in the COFFEE.

Perhaps it would be less expensive to hire a chef service than give up a job to cook for their child.

I viewed my job as a parent to give them the tools to succeed in life. Painful at times.

Sous-vide cooking is wonderful for just about everything from eggs to roast beef to pork belly. And it doesn’t heat up the house.

One of the interns from China cooks. He is a graduate student who has learned cooking skills. He cooks a big batch of something on Sunday for lunch during the week. He makes a hot breakfast daily. The other intern eats fast food.

I have discovered cooking for one or two to be a challenge and tend to rely on salad variants. Good for the summer but not good for winter.

My kids can cook. One is a chef changing career (injury) and leaves the biggest mess. A tyrant in the kitchen with no fear.

I visit the kids and turn a blind eye to how they keep their residences. They know how to clean and at some point they might just do that.

Also, I’ve found having a sous-vide to be amazingly useful

Do you worry about cooking the plastic bag in high temperature? I can never sell that to my wife…

Taking the tough love stance on your kids a tad too far, no?

Also, I’ve found having a sous-vide to be amazingly useful

Do you worry about cooking the plastic bag in high temperature? I can never sell that to my wife…

Yes and no. I am definitely the kind of person to worry about it. I certainly appreciate her concern.

However, because I get my meat frozen from the farmers, it’s already in plastic. I figure heating it to 135 or 140 is not that high, but it certainly could still be a bad thing. I don’t taste the plastic on the meat though (I’m all about “If I can smell it or taste it, it’s definitely not ok.”). Also, when I heat the meat, it generally gives off juices, and I wash the meat fairly thoroughly before I spice and broil it. If I’m just defrosting (like to make hamburgers), then I only go to 90. But then I don’t rinse that.

There are special bags that are supposed to be sous-vide safe. There are even silicone bags, but they need to be of pure silicone (no plasticizer), and last I checked, there was no guarantee of that.

One thing you can do if you wanted to boil or slowcook something in broth is simply to put the ingredients into a metal or glass bowl and put it in the sous-vide. Like if you wanted to make ribs or something. I’ve done that too when I thought I’d keep the sauce. but even with ribs, you could put them in a bag and rinse and toss the sauce, and add fresh sauce when broiling.

So, yes. I worried about it. And then I decided I’d just stop worrying about it. It’s like most other things–I’ve done 50-60% of what I can–I have glass storage containers (with plastic lids), stainless steel cookwear, buy organic. I try to buy salad dressings and spaghetti sauce in glass jars. But I have yet to live a plastic free life and get my meat wrapped in paper, my clothes only cotton and wool, and my water filtered into a glass jar.

Perhaps it would be less expensive to hire a chef service than give up a job to cook for their child.

Yeah… No kidding… I mean presumably she gave up a pretty good paying job. One does wonder if she was escaping the husband. Or just missed her son.

On the other hand, it does put a damper on the kid’s dating life. Maybe she’s planning an arranged marriage when he returns home.