I suppose one day we all will be either driving fully electric cars that we can “fill up” at home or take rides via Uber or autodriven car services. At least in the Sunset, I haven’t seen any stations turn over to housing just yet. Across the Bay Area, gas stations are disappearing and new housing is springing up in their place.

I actually thought about buying a gas station for investment. But the shift to electric cars gave me pause. It looks to be fairly lucrative.

I think hydrogen is a dead end. Dense urban area doesn’t have the space to build the stations. Without the stations the cars will never take off. Chicken and egg.

Refiners make the money. Gas is sold at very little margin. It’s the convenience store that makes money. Paying at the pump has hurt that business.

It looks to be fairly lucrative.

Refiners make the money. Gas is sold at very little margin. It’s the convenience store that makes money. Paying at the pump has hurt that business.

I’m with Manch, I thought it’s lucrative, but it’s just my subconscious mind’s guess. At least it looks like a passive business. (Although the previous Sunnyvale gas station incident might indicate that you’ll need some good insurance)

Anyone knows the actual numbers?

I believe @marcus335 is more correct that the gas sales itself is nothing compared to the junk food, etc sales from the convenience store. Here is some granted dated info off of of the web, but it is consistent info from everyone pretty much:

Even though you think gas costs a fortune—because it does—gas stations make little, if any, profit of fuel sales. Their cash cow? The cheap, pink sunglasses.

@manch Can you post the financials of the gas station operation that you looked at? Value, profit margin, income, etc. I am always interested in that but never had concrete data.

Several years I drove up to Tahoe and stopped in Auburn for gas. The owner greeted me and said he used to live in south bay too as he saw the dealer license plate frame on my car. So we chatted a bit. He told me he is Indian and I said there is a big Indian population in the silicon valley why do you want to move up here. He said he is not an educated man so running a gas station business is the best option for him. He just needs to put in the hours and money comes in steadily. I made myself a mental note to look into gas station businesses but never followed up on it.

I search for “gas station” on Craigslist’s business for sale section. Take this for example:

Now they all claim 35% margin on the convenience store. Let’s do the math:

So 27K return every month.

The remaining is headcount and insurance etc. How much is that?

I also like to search for “absentee” in CL’s biz for sale section. Gas stations sometimes turn up there. That’s how I start noticing them. 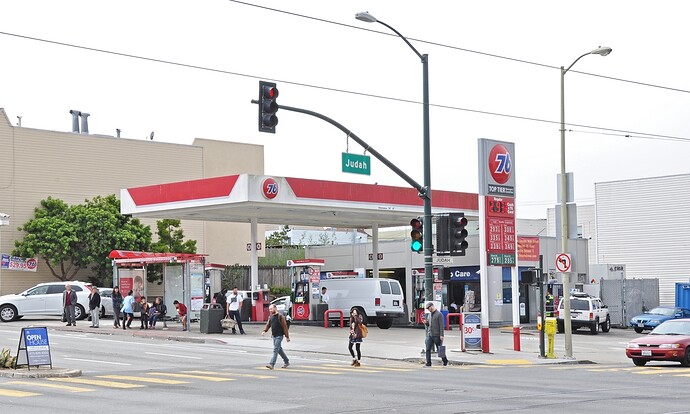 19th and Judah in Sunset SF. Asking for 6.3M. @sfdragonboy you want it?

I think a bit more about gas stations. Even in the era of EV’s they still need some fast charging stations. Gas stations today are the perfect place to install those fast charging equipments. Cities like SF simply don’t have a lot of space left, so buying gas stations doesn’t sound as crazy as I first thought.

Time to save up for the down payment…

Really, you like what will be essentially charge up stations in the future? I am just thinking that unless you are traveling a long distance why would someone need so much juice at any given time? They just need enough to get home to recharge there. We hear that the profit is from the snack bar but still, even the service side (auto repairs) will be less won’t it since these electric cars are less complicated?

Costco, Safeway and GasBuddy have made opening a Mom and Pop gas station a risky business …Like my friend that owns a 7-11 in SF told me the big money is in the lotto tickets not the gas…

big money is in the lotto tickets not the gas.

Right. But you still need the gas station to draw people in. Gas station + 7-11 is the winning combo.

If I were to buy gas stations, I will buy the real estate underneath as well. Seems to me that’s a better defense play. Especially gas stations near freeway exits. I think there will always be some use for that piece of land. If not gas stations then something else. Right?

COSTCO has been consistently $0.50/gal less than any major retailer in my regular travel area of the north/east bay. That’s about $8.50 per flll up savings for me. And COSTCO is considered a “top tier” vendor.

I figured they were using it as a loss leader. But then again, they have one person on duty; it’s self serve; there is no car wash or other services, not even a squeegee for your windshield. There’s always a line. So, I’m thinking they make money on volume and low overhead.

Can’t compete with that unless one is in a unique location without competition.

Greenwich households boasting a net worth of $50 million or more can soon apply to join a gas and convenience store chain where amenities include a waterpark, steakhouse and designer clothing boutique. The Guess Corp., which began trading diamonds...

I use Arco but people look down on me.

I don’t need my car to last 20 years. I’m going to upgrade my car every 5 year or so anyways.

I have to admit, I tend to think like that (that “name brand” stations are better) but I don’t know for a fact that there are truly any real differences in the quality of the gas. People have said that oh they had issues with using no name gas but who knows…

I avoid Arco because they always have super long line without fail. And they charge you more to use credit cards?

I think some gas blends in more ethanol than other. Ethanol is the worst. It’s not green, takes up lots of subsidy money and gives you less energy for the same volume.