I stumbled upon this website when I googled “science toys for girls” last night. Yeah, some really last minute Christmas gift shopping.

The world's largest collection of books and movies for smart, confident, and courageous girls

It has lots of recommendations, neatly categorized. The one I ended up buying was actually not gender specific, which is the way I like it. Anyway, I’ll throw it out here in case anyone is still searching for gift ideas.

What happened to just buying a traditional Barbie doll? I feel sad for kids nowadays; they can’t ever take a break.

Very nice!
I already purchased very girly gifts to my daughters based on their wish list. However, i will go through this website with them for the next gift.
I have never been into girly stuff like Barbie myself and as a result am more excited with science toys. However, after all, i want to find something they enjoy the most. Otherwise, it would be just waste of my money.
Fortunately, they enjoy circuit toy as well as "monster high doll(i guess Barbie is just not hot any more. 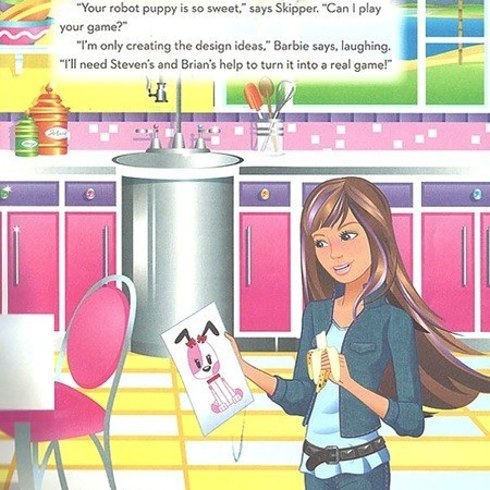 This picture certainly is.
However, some of Babie classic movies were pretty good from my pespective since they emphasize general moral values and Barbie often acts very proactively to resolve conflicts and challeges. At least, none of them were violent.
It is interesting to see your concern on the influence of Barbie (or any other gender biased toy, movie) on your daughters.
My husband was super unhappy to see my daughters watching Barbies. He was much more intolerable to those gender biased stuff than me worrying about negative influence to our daughters.
Well, my older one joined robotics club and wants to be an engineer and my younger one played with circuit toy all day long yersterday. After all, i guess gene plays out the most?

I am also more militant about the gendered stuff than my wife. So I insist on having no TV’s and ban most Disney stuff from the house. With Disney it is much tougher as they are literally everywhere. But I don’t think I will bring my kids to Disneyland ever. That’s my redline.

So I insist on having no TV’s and ban most Disney stuff from the house. With Disney it is much tougher as they are literally everywhere. But I don’t think I will bring my kids to Disneyland ever. That’s my redline.

I don’t think that’s a good idea. This happened to one of my friends when she was growing up and she was not able to get into normal conversations with her peers in school because she was banned from watching tv (when such topics came up). Even to this day she blames her parents for not letting her having a normal childhood. As her friend sometimes I find her interests kind of peculiar because she grew up without tv.

I agree…
Although i do respect every parents’ decision on their kids, i learned that banning too many bad yet fun stuff from kids may hurt their social interaction with other kids. (Well, i am essentially repeating same argument which i use to my husband all the time.)
They also need to learn how to develop their own judgement in spite of many many negative influences of media and other sources.
Maybe, i am too lenient parent. However, when i ask my older one what part of my parenting she is most satisfied with, she always says that “I am so glad you are too busy to control my life and let me have quite independent life”. Not sure if this is compliment or complaint but it has been working well so far.

Kids still get screen time on their iPads. So it’s not like we are living in a cave.

I just don’t like a big 60 inch tv dominating our family life. With smaller screen like iPad we as parents can better control what they watch and when. I have had no tv for 6 years now so far so good.