How Homeownership Became the Engine of American Inequality 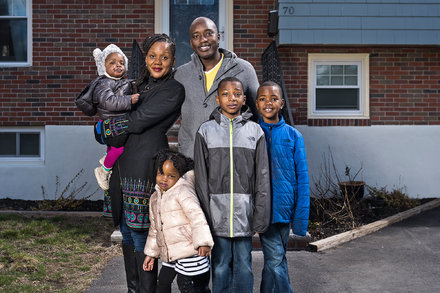 How Homeownership Became the Engine of American Inequality

An enormous entitlement in the tax code props up home prices — and overwhelmingly benefits the wealthy and the upper middle class.

A powerful article on how the mortgage interests deduction rewards the rich and traps America’s poor.

Trump understands and removes state+other taxes out of itemization and increases standard deduction ! When that comes, if it comes, MID is not useful with 25k (joint filing) standard deduction applicable across tax payers ! MID is useful for loans between 550k and 1.1M alone !

The article conveniently ignores the phase out rules

Billionaires like Trump won’t get his mortgage interest deducted since his income tax is very high.

It’s not MID that drives the wealth gap. It’s the forced savings and leveraged investment that appreciates with inflation (non-BA RE). Plus, most of your monthly costs are fixed while renters face increasing rent year after year.

They obsess on MID but don’t even mention earned income tax credit. Some how 42% of American households pay zero income tax. Most of them don’t have MID. How can MID be an entitlement for the rich but EITC isn’t an entitlement for lower income people? How much are we supposed to cut the tax bill of someone paying zero? The top 20% are still paying 87% of the income taxes, so saying the government subsidizes them with MID isn’t even remotely honest.

The comments on payroll taxes are way out there. People don’t even benefit from them until retirement age, so how do they make someone successful during their working years? They call it regressive but 90% of people receive more in benefits than they paid in taxes. That sounds pretty progressive. The ignorance of social security and Medicare math in this country is frightening.

The paragraph on FDR was quite interesting.

Is there ever a government solution that isn’t take money from one group of people and give it to another? I swear it’s the only solution their brains can conceive. It’s not lowering the cost of housing. It’s simply making someone else pay for it.

Then they bring up WW2. Before that taxes collected were under 5% of GDP. It went up significantly for the war. The problem is it didn’t go back down after. We’ve averaged 17.5% of GDP in taxes ever since. Where has all that money been going for decades?

Before 1913, there was no income tax. Yet the US had a military, roads, schools, and all the other things people say we wouldn’t have without income tax.

Sorry, but when my family immigrated to this country we were poor and had nothing. It took generations of sacrificing and real skimping in order to save enough to eventually buy a home. Even when our family managed to finally buy a home, did I have wonderful summer camps and family vacations to share with classmates? Did we even own a used, beat up car? No. I wore hand me downs from my Big Bro. We all worked even as teens during summers. We learned at a very young age that multi unit dwellings is the key. Renters sharing the burden of the mortgage. IN ALL MY YEARS ON THIS EARTH (exception college years), I HAVE NEVER LIVED TRULY IN A SINGLE FAMILY HOME. THINK ABOUT THAT. Even today, when I supposedly have enough money I take every opportunity to rent out space. If my family can do it, in also an environment that was so discriminatory against Asians at the time, others today can do it. No excuses. People just aren’t willing to sacrifice enough. What does that mean? That means living in small apartments perhaps in bad areas like East Oakland or pre-gentrificated East Palo Alto or Bayview/Hunter’s Point and saving, saving and saving!!!

Here is a perfect example of what I mean by folks today who have some means even, who are not willing or clueless about really saving money. Renting at NEMA for 7k/month??? Idiots! No wonder you don’t own a house…

The dilemma Natalia Melendez and John Uphoff are facing is foreign to most Americans.

They should remove the MID for 2nd homes… That shouldn’t be controversial right?

They should remove the MID for 2nd homes… That shouldn’t be controversial right?

Also everybody pays payroll tax, sales tax, gas tax and all the other government “fees”. Just singling out one - the income tax - is missing the forest for one tree.

There is no denying millions are suffering. I think it points the spotlight properly on us the homeowners. We benefit mightily from government programs. We are the welfare queens.

What i found now days americans have no common sense. Instead of finding solutions, they love complaining, blaming. If you want to save money, spend less.
silicon valley people does make a lot of money, but they’re pretty stupid especially managing their own finances.
2 years ago, I was selling some 49ers ticket in my company. And one of the senior managers bought 2 tickets from me, and he has to do it in 2 payments.

People simply do not understand that yes that Starbucks coffee every morning, or that lunch outside adds up to be quite a sum. The perfect example is poor people with cell phones. Why???

Since talk is cheap, I will keep talking since I’m cheap.

Perhaps we can keep total amount of tax paid roughly same but could we at least try to simplify the tax system to make it less complicated? So many pages of instructions and forms…it’s hard as a small business to keep up!

There you go, advocating for a less complicated system is a good idea.

Before 1913, there was no income tax. Yet the US had a military, roads, schools, and all the other things people say we wouldn’t have without income tax.

Is it as bad as the neighborhood I was in when I was young? Walking to school occasionally met fights with broken bottles. At night, hear gun shots and beating up of gangsters by the police! Is legal to beat up gangsters openly then!

We benefit mightily from government programs.

Exclude me please. My primary has no mortgage.

Exclude me please. My primary has no mortgage.

could we at least try to simplify the tax system to make it less complicated?

There you go, advocating for a less complicated system is a good idea.

I hear that argument a lot, and I thought about it a bit. Here’s my argument why that doesn’t make any sense.

Let’s say I were Chamath (can’t get enough of the guy) and owned the Warriors. I see some problem with the NBA rules that’s unfair. Maybe even the way 3-pointers are treated that Warriors and every other team take advantage of. So you are saying I couldn’t argue for fairer rules until I force Curry to retire?

It’s because the argument makes you look noble. You benefit/feel good about it, but you don’t have to cash checks that you are writing. If it matters to you that much you can easily make it “fair” for you. Lead by example. I don’t buy the Chamath explanation… really I’m on a phone call at the same time so I haven’t thought about this thoroughly.

Many people do this, talking heads are everywhere. People advocating for getting rid of the LTCG benefit for carried interest… cheap flipping talk.