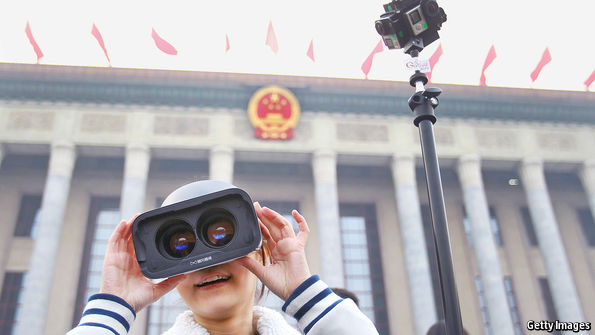 China leads the world in the adoption of virtual reality

AT THE heart of an emerging technology cluster in London’s Shoreditch lies the Stage, a big mixed-use building complex that is being developed by Vanke, a Chinese real-estate company, among a few others. A potential Chinese buyer of one of the flats in its 37-storey residential tower recently had a look around. She went from room to room, observing the furnishings and fittings. She marvelled at the city views from the balcony and peeped inside the refrigerator. There was no need for a flight to London. She toured the property using virtual reality (VR) goggles at Vanke’s global marketing centre in Shanghai.

The use of VR kit is quickly becoming widespread in China’s property industry. Few real-estate firms in other countries are as advanced. China is fast emerging as the world’s most important VR market, thanks to rapid adoption by property firms and by companies in other industries. The prompt take-up is not because Chinese firms make the best VR headsets, which they do not. In fact, the pioneers in cutting-edge hardware are America’s Oculus, which is owned by Facebook, Japan’s Sony, South Korea’s Samsung and Taiwan’s HTC. It is in California, not Chengdu or Chongqing, that the best software for VR games and movies is being developed.