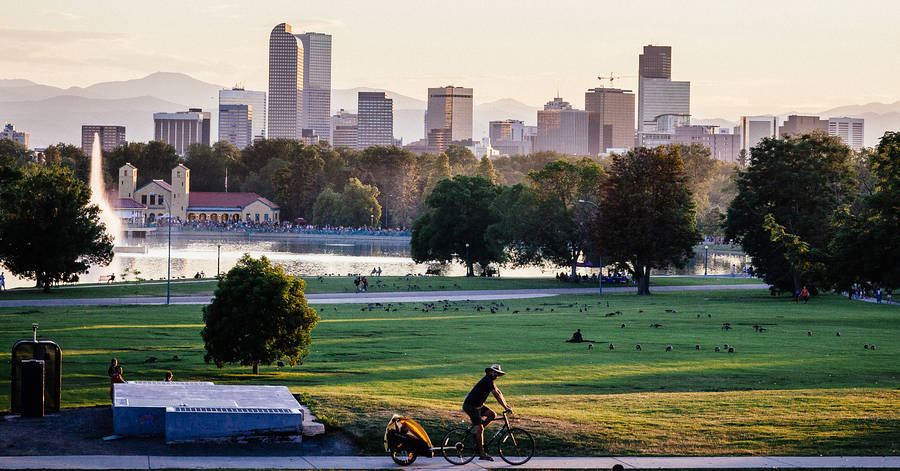 Charles Schwab is one of the firms leaving traditional coastal financial hubs like New York and San Francisco in favor of cities with cheaper real estate like Dallas or Salt Lake City.

Wedged into a rent-controlled two-bedroom apartment near San Francisco’s famed Haight-Ashbury neighborhood and already overrun by their son’s toys, Kari Droller and her husband weighed having a second child against the skyrocketing costs of a larger home nearby.

Instead, Ms. Droller, managing director of Charles Schwab Inc.’s ETF platform, put in for a transfer to Denver, joining a tide of financial professionals who are forsaking high-cost coastal meccas for America’s inland cities.

The market’s shift to low-cost passive investing compounds those difficulties, pushing firms to look for new ways to cut costs.

Charles Schwab is emblematic. Since announcing its relocation strategy in early 2013, the company has shrunk its San Francisco headquarters to fewer than 1,300 people, a 45% decrease. Its 47-acre campus south of Denver is now Schwab’s largest office, employing almost 4,000 people. An expanded office in Austin, Texas, will be completed next year, and construction is under way on a new location near Dallas.

Suddenly we are seeing lots of hit articles on San Francisco. This is adding pressure to Sacramento to do something about the housing issue this Fall. 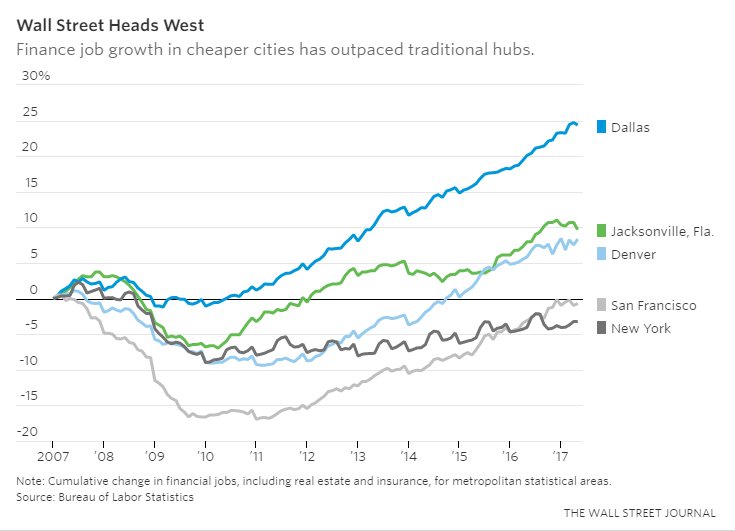 This is about private people. In a month, I have had conversation with 3 clients of mine going to Texas. Instead of buying expensive homes over here, they rather start anew there. They would be paying a mortgage not even close to what renting a garage would be over here.

Suddenly we are seeing lots of hit articles on San Francisco. This is adding pressure to Sacramento to do something about the housing issue this Fall.

What are they going to do? Their big plan was going to create 3,000 units in a state that needs 1.5M. Short of passing legislation to over ride local zoning laws and approval process, what can they do? Even if you get ride of zoning laws, they aren’t going to get rid of the fees involved which are $75-150K/unit. Also, unions will never allow affordable housing to be built by non-union labor. Going prefab modular to lower costs is out.

SB35 is the big one to watch. State is trying to grab the approval process from cities. It’s difficult to pass. There are also those usual dumbass bills like increasing fees for affordable housing. Such is the joy of democracy.

Well, those taking action are leaving instead of complaining. That’s what I get from the guys I talked to. Not much mumble jumble, they are getting out!

If I had bunches of real estate properties, I’d sell and go buy me an empire somewhere else where I can be the boss of my own kingdom. But you can’t. There is a thing called government and taxes waiting for you. But less expensive no matter what.

I would expect legal challenges to that, and it could take years to resolve. Just spend millions more of tax payer money on the legal fees

It’s natural for old industry to move to less costly areas. Nothing to worry about. We can’t promote protectionism at the state level. I would be glad to see other part of US enjoy some conomic boom as well

High paying jobs are replacing lower paying jobs. BA had so much boom and we can’t keep everything to ourselves. We have to be willing to share our economic boom

An expanded office in Austin, Texas, will be completed next year, and construction is under way on a new location near Dallas.

That’s the place to go.

The biggest recipient of BA migration will be the Sacramento MSA…I bought in Sacramento in 1999, best deal I ever bought…Now I live in the Sacramento MSA in South Lake Tahoe…The Sacramento MSA will be merged with the BA MSA to create a megalopolis rivaling LA with 15m people. …Traffic is already pretty much solid from Placerville to Santa Cruz…Fortunately I won’t be around to see the potential negatives…Hopefully commuter trains will get a priority over the HSR debacle…

HSR from Sac to SF or SJ in 30 min! Yes I think Sacramento has way more potential to be merged with Silicon Valley than Central Valley does.

An expanded office in Austin, Texas, will be completed next year, and construction is under way on a new location near Dallas.

That’s the place to go.

As I said, the people complaining about this area, get the drums ready…are leaving without much BS.

A couple I interviewed 10 days ago, tired of paying lots of $ for their renting, moving to Texas, they know because of their skills, not high techies, they will thrive anywhere. They bought a 5-3 home for $250K.