I know that they already have 3 offers slightly over asking and will make a decision on Monday, someone with deep pockets will buy it, evict folks and put it a market rents

Totally, the current owner could be making so much more money, the other important thing that the broker flagged was how cheap the property taxes were, seems the property hasn’t change hands in 30 years.

I know that they already have 3 offers slightly over asking and will make a decision on Monday, someone with deep pockets will buy it, evict folks and put it a market rents

Probably. Glad I got off of “RWC residents say what!?!” Will have to avoid Nextdoor for a while There’s going to be more whining over this. Always whining.

What’s the whining from RWC residents? If you buy it, will there be any political protest?

The residents will sue if the rents are raised and they are evicted. BA tenants are militant and their are plenty of lawyers that will take these cases.

What’s the whining from RWC residents? If you buy it, will there be any political protest?

They whine that someone bought the place, evicted and renovated and then charged market rent. They’ll whine whether it’s a mom-and-pop who did it (ie duplex, owner occupied) or an investor. They’ll whine when the eviction is done by some elderly gentleman who’d been charging $1K/month for a 2-3BR for 30 years and then finally raised the rent to $3K. Doesn’t matter. It’s always unfair in their eyes. Always.

My life is so much better now that I’ve gotten off the local social media. It means I’ve no idea what horrible thing the council is doing now, but I care more about my sanity than about the crappy apartment complexes going in downtown.

Now I understand why there is nimby. Given a choice, I would build more condos and no apartment. Condos can be tenant occupied, but apartment will cause a 100% tenant occupancy in a block which is not a good idea.

The neighborhood is probably the most run down in RWC. Eventually though, all of it will gentrify, just like EPA.

I think you can do quite a bit worse…e.g. the stuff on the other side of 84, friendly acres, etc.

The big advantage of this neighborhood over others is walking distance to Broadway, coffee shops, caltrain, etc. Long term, areas like this may be rezoned, allowing for higher density. Selling to a developer in that context is where you make the real money.

Sold below ask. Seems to be a cash buy? 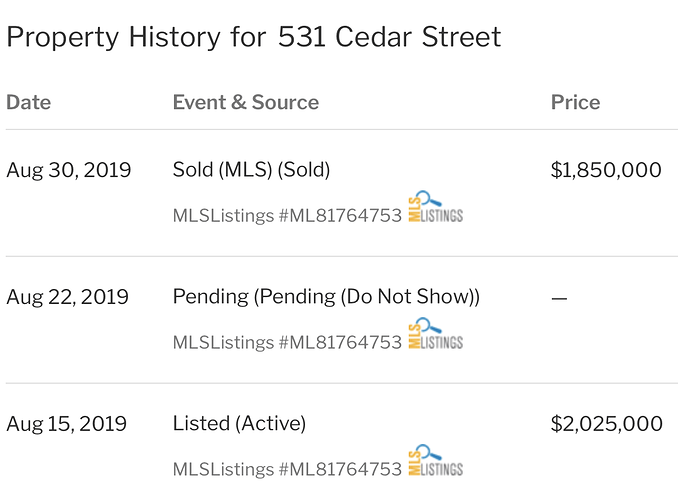