Rent Control Roaring Back in NYC 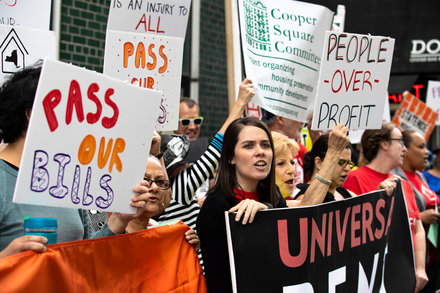 The bills announced on Tuesday night by the Democratic leaders of the State Senate and the Assembly would abolish rules that let building owners deregulate apartments and close loopholes that permit them to raise rents.

The legislation would directly impact almost one million rent-regulated apartments in New York City, which account for more than 40 percent of the city’s rental stock, and allow other municipalities statewide beyond New York City and its suburbs to adopt their own regulations.

They clearly don’t listen to their politicians who talk openly about how they’d prefer if the city owns all real estate. Then the city would decide who loves where and what their rent is.

Country as a whole is turning left. I am not surprised by this. Expect more rent control measures everywhere.

The country as a whole isn’t turning left. The cities that were already far left and going even further left. You happen to live in one of those areas, so it feels like things are going more left. That doesn’t represent the whole country.

People in the BA and CA have no clue about national trends.

The fact that trump and warren’s economic plans have so much in common should tell you something. The neoliberal order of Reagan and thatcher is on retreat. People are asking for more government involvement in the economy, not less.

Trump himself is on the left of the old Republican Party. I heard the Koch brothers are not too happy. I am mostly a Cato kind of guy on economic issues and I can tell you there are a lot of Cato/heritage foundation types not happy with where GOP is heading.

Trump is an asshole and a loose cannon. It is pathetic that Democrats can’t beat him. Hillary was a much better candidate than anyone running now and she defeated herself. Biden has a chance if the leftys don’t cripple him.

Hillary is too aloof to connect to Joe Sixpack. Biden is well liked pretty much across the board, even for people who disagree with his policy.

Women don’t like him, of course they don’t like Trump either. Hillary underestimated him and Democrats cannot just run against Trump. Or worse run on a leftist progressive program. Biden is their best hope, but if women and progressives don’t show up he will lose.

Biden will lose against a good boy like Romney. But come on he’s against grab-your-genital Trump.

Is there a remote possibility for a war with Iran? Trump dislikes war but Bolton loves war.

What Trump will do is to delay the US China deal till the 11th hour and then agree, scoring a huge victory, strong rallying stock market and Americans are proud that he is able to tame an awakening lion. Outcome, Trump won by a landslide. For stock investors, brace for another 6-12 months of volatility.

China better cut its loss and accept some sort of deals. If no deal is struck and US economy tanks, you know what Trump will do? He will pick fights with China to show he’s tough on China. Nothing rallies American people more than to have a foreign enemy. It works for Reagan with USSR and it will work for trump with China.

Neither US nor China have unlimited leverage. The art of the deal is to stop right before you fall off the cliff.

Multifamily deals came to a standstill as investors got scared away by New York’s new tenants-take-all regulations. The rules, governing about 1 million apartments in the city, take direct aim at landlords’ income – and investment returns – by making it almost impossible to raise rents, remove units from state regulation, or even recoup the costs of capital improvements.

In the first half of 2019, New York City apartment building sales fell 48% from the same period a year earlier, B6 said in a report. It was the biggest decline for any six-month period in data going back to 2009. In northern Manhattan, which includes Harlem, the drop in multifamily purchases led to a 61% slide in all commercial-property transactions, the firm said.