Should We Be Worried about Made In China 2025 Program? 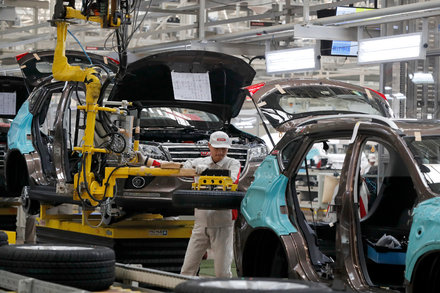 European and American companies say that a $300 billion effort to make China self-sufficient in important sectors could lead to unfair competition.

Microcircuits made by Shanghai-based Semiconductor Manufacturing International Corp. Semiconductors are among the sectors being targeted in China’s high-tech push © Bloomberg
Share on Twitter (opens new window)
Share on Facebook (opens new window)
Share on LinkedIn (opens new window)
85 Save
YESTERDAY by: Charles Clover in Beijing
Beijing’s plans to create national champions in 10 high-tech manufacturing sectors by 2025 have come under fire from European businesses, which fear Chinese producers will swamp whole industries with overcapacity and spark a protectionist backlash.

Sample the FT’s top stories for a week
You select the topic, we deliver the news.

“The broad set of policy tools that are being employed to facilitate CM2025’s development are highly problematic,” said the chamber, which represents European businesses in China. The report was timed to coincide with the National People’s Congress, the annual meeting of China’s rubber-stamp legislature.

The chamber said, for instance, that foreign carmakers with electric models were being pressed to turn over their battery technology to Chinese partners in exchange for being able to produce and sell in China.

“European business is facing intense pressure to turn over advanced technology in exchange for near-term market access,” according to the report.

Other measures that have been already implemented, such as subsidising local producers of battery-powered cars, are possibly in violation of China’s commitments to the World Trade Organisation, the EU chamber said. However, foreign businesses fear WTO resolution may not be an option given the length of time the process takes and the potential for retaliation by China.

On Sunday, at the opening of the NPC, China’s government appeared to react to criticism of its manufacturing plans, saying in a government work report: “Foreign firms will be treated the same as domestic firms when it comes to license applications, standard-setting and government procurement, and will enjoy the same preferential policies under the Made in China 2025 initiative.”

Jörg Wuttke, president of the EU chamber, acknowledged that the criticisms of China’s trade and investment policies may spark protectionist calls in the EU, but said the report was intended to pre-empt rather than champion trade barriers. “We are saying this not to encourage protection but with an eye to the rise of populism across Europe,” he said.

The new measures proposed by Beijing date back to 2015, when Beijing announced a plan known as Made in China 2025. Modelled on Germany’s “Industry 4.0” programme of smart manufacturing, the plan identified 10 sectors for China to dominate locally but in which it should be competitive globally. These included robotics, advanced medical technology, semiconductors and new energy vehicles.

The plan was unusual, said Mr Wuttke, in that it specified precise targets for market share, both domestic and foreign. That awoke concerns in Europe and beyond of “steroid-fed” state companies swamping lucrative sectors with Chinese production, similar to what has happened in other low-end manufacturing sectors over the past two decades.

In many cases, for example in high-speed rail, western multinationals such as Siemens have handed over technology under licensing deals only to see Chinese partners turn round and compete with them in foreign markets.

Many analysts say foreign multinationals’ attitude to China has hardened in the past few years, as growth slowed and competition sharpened.

European business is facing intense pressure to turn over advanced technology in exchange for near-term market access
EU Chamber of Commerce in Beijing
“Many companies that were more tolerant of an unlevel playing field back when China was growing in the double digits are now finding this level of patience running thinner in this new lower-growth environment,” said Jude Blanchette of the Conference Board in Beijing.

At stake for China is a transformation desperately needed for the country to escape the so-called middle-income trap — a term used to describe the struggle faced by developing economies seeking to make the leap to a high-wage economy when rising incomes have already hampered the country’s competitiveness.

With the number of workers shrinking for the third year in a row, Chinese incomes are now higher than in many middle-income countries, so productivity needs to improve to keep up with rising labour costs. Average wages have surpassed those of all Latin American economies except Chile and are fast catching up with those in peripheral eurozone states such as Greece and Portugal.

“If they can’t get out of low-end manufacturing they will be stuck, given ageing and the competitive landscape,” said Mr Wuttke. However, the EU chamber said state-led industrial policy was not the best way to achieve this.

“China’s global champions are Huawei, Tencent and Alibaba, all private companies that are market-led,” he said, referring to the telecoms equipment group and China’s top two internet companies.

China’s tech is so doing very well. They initially copy but innovate and improve way better than the original.
just look at wechat(if you have the full feature)

initially copy but innovate and improve way better than the original.

Tried and tested approach.
Japan, South Korea and many nations use this approach.
May be many European nations used that too but I’m too young to know, and just too lazy to read up history.

“If they can’t get out of low-end manufacturing they will be stuck, given ageing and the competitive landscape,” said Mr Wuttke. However, the EU chamber said state-led industrial policy was not the best way to achieve this.

This was entirely predictable the minute we started outsourcing manufacturing to them. Software won’t be far behind with China and India fighting for it.