Should You Pay Off Your Mortgage? The New Tax Law Changes the Math

Source: Should You Pay Off Your Mortgage? The New Tax Law Changes the Math - WSJ

Now is the time to find out if you are one of the millions of Americans who won’t be able to deduct their monthly mortgage-interest payments.

For 2017, 32 million tax filers got a mortgage-interest deduction. For 2018, that number will drop to 14 million. Americans’ total savings from this break are also expected to fall sharply this year, from nearly $60 billion for 2017 to $25 billion for 2018, according to Congress’s Joint Committee on Taxation.

These landmark shifts are the result of the tax overhaul’s direct and indirect changes to the longstanding provision allowing filers to deduct home-mortgage interest on Schedule A. These changes are set to expire at the end of 2025. 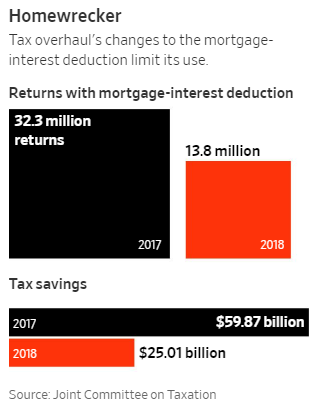 As a result, current and future mortgage holders need to consider their options, which range from paying part or all of their debt to sitting tight.

“The changes to the mortgage deduction strengthen the arguments for paying down or off a mortgage,” says Allan Roth, a financial planner with Wealth Logic.

Some homeowners are already reducing their debt. Ken Walsh, an engineer who lives outside Baltimore with his family, says he used a windfall to pay off the remaining $500,000 mortgage on his home in January.

When the tax overhaul passed, Mr. Walsh knew that he and his wife would no longer get an interest deduction, even after their 2.6% adjustable-rate loan reset higher this year.

“It was a perfect storm, so we decided to pay off the loan,” he says.

Mr. Walsh’s move may not make sense for everyone. Here’s what to consider for your analysis.

The key changes. For many people, two revisions to non-mortgage provisions will have the biggest effects on their mortgage-interest deductions.

One is the near-doubling of the “standard deduction” to $12,000 for most single filers and $24,000 for most married couples. As a result, millions of filers will no longer benefit from breaking out mortgage interest and other deductions on Schedule A.

The other key change is the cap on deducting more than $10,000 of state and local income or sales and property taxes, known as SALT. This limit is per tax return, not per person.

These changes will hit many married couples with mortgages harder than singles. Here’s why: For 2017, a couple needed write-offs greater than $12,700 to benefit from listing deductions on Schedule A. Now these write-offs have to exceed $24,000.

Why Next Year’s Tax Refund May Bring You Extra Dough

Under the new tax law approved by Congress, the standard deduction is going up and the personal exemption is going away. But these changes won’t be visible until your 2019 returns. WSJ’s Richard Rubin explains the recipe behind the changes that are coming to your tax bill.
Assuming a couple has maximum SALT deductions of $10,000, they’ll need more than $14,000 in other write-offs of mortgage interest, charity donations, and the like to benefit from using Schedule A.

Many couples won’t make it over this new hurdle on mortgage interest and SALT alone. According to the Mortgage Bankers Association, the first-year interest on a 30-year mortgage of $320,000 (the average) at the current rate of 4.8% is about $15,250. Interest payments are smaller if the loan is older or the interest rate is lower.

The new threshold is lower for single filers, as each can also deduct SALT up to $10,000. Their standard deduction is now $12,000, so many will only need more than $2,000 of mortgage interest, charity donations and the like to benefit from listing them on Schedule A.

Even for taxpayers who can still deduct mortgage interest, the expansion of the standard deduction means the value of this write-off will typically be lower than in the past.

Other limits. Following the tax overhaul, most home buyers can deduct only the interest on total mortgage debt up to $750,000 for up to two homes. This limit won’t be an issue for most buyers, but some will be affected.

There’s a “grandfather” exception: Most homeowners with existing debt up to $1 million on up to two homes before the tax overhaul can continue to deduct their interest.

The rules also changed for home-equity loans. To get an interest deduction, the taxpayer must use the debt to buy, build or improve a home. There’s no write-off if it’s used for another purpose, such as paying tuition.

Doing the math. For homeowners with a shrinking or vanishing interest deduction, here’s the key question: Is the after-tax return on an ultra-low-risk investment lower than your after-tax mortgage rate? If it is, consider paying down the mortgage if you can.

Mr. Roth offers this example. Say Bob has a mortgage rate of 3.7%, and he’ll no longer get an interest deduction. He’ll need to earn about 3.7% after-tax on an investment such as a five-year CD to come out ahead by keeping his mortgage. Recently some of these CDs had pretax yields of about 2.8%.

Preserving liquidity. Even if paying down a mortgage makes financial sense, it means restricting access to funds. So consider whether they’ll be needed in an emergency, and what the rate on a (non-deductible) personal loan would be. You need to be able to sleep at night.

Saving the difference. If you pay off a mortgage, Mr. Roth advises setting up an automatic payment of the savings to an investment account to rebuild your liquidity.