There Are Plenty of Jobs Out There, America

The U.S. economy is going through a sea change in which the main constraint isn’t demand but supply. There’s plenty of consumer demand for goods and services, but companies lack the workers to satisfy it. Workers, in turn, don’t have the tools they need to do their jobs, because business investment in modern machines, software, and buildings has been weak. Government is also to blame: Congested roads, bridges, and ports are evidence of chronic public underinvestment in the infrastructure that supports growth. “We’ve moved from a period of cyclical, demand-side recovery to structural, supply-side stagnation,” says Robert Atkinson, president of the Information Technology and Innovation Foundation (ITIF). 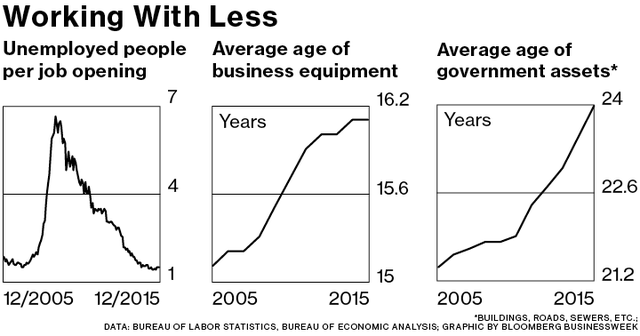 Probably not a good time to deport millions of workers…

Cool, that is music to our owners’ ears!!!

The messed up part is the job openings are growing faster than hiring. The hiring process is completely dysfunctional and broken. It needs disruption.

If this is true, inflation will fly and wages will increase a lot. So fed is right to increase interest rate.

I hope they won’t increase 4 times a year.