We have too much crap 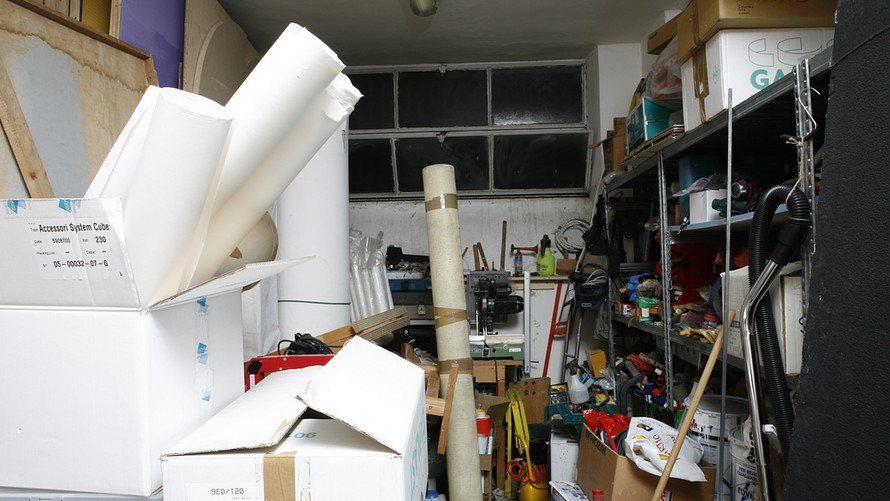 People almost always keep their things in storage longer than they thought they would—and waste money as a result.

For many Americans, a self-storage unit is seen as a temporary place to stash stuff when they’re in between living arrangements or dealing with some major life event.

Here’s the problem: People almost always keep their things in storage longer than they thought they would — and waste money as a result. That’s because much of the stuff isn’t worth keeping. 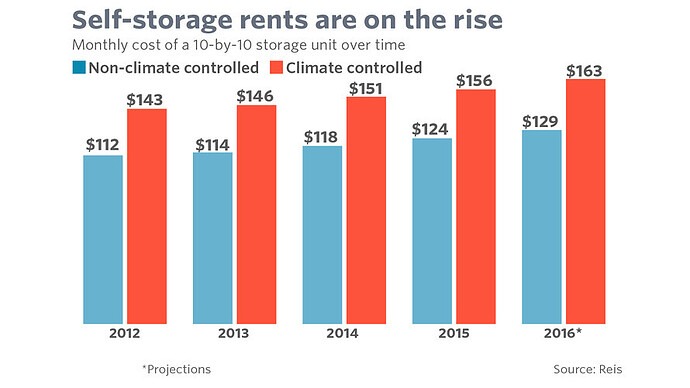 I have done very well with self-strorage…The big money is in development. …Cost $120/sf including land…average rents nationally 10 years ago were about $1/sf…BA about $2.50…about the same as apartments. …but much cheaper to build. The price of apartments drives the price of self storage

We are halfway through emptying the storage unit and six months behind schedule. Life gets in the way. Didn’t expect to face a child nearly dying along with a husband being hospitalized several times.

I’ve rented three storage units in 40ish years. First at 22 when I had major surgery and moved to the parental home to recover. Second was prep for selling to stage home. Third was this downsizing and renovating.

Generally I’m agInst storage units because they cost more than the contents over time. But then people pay money to move junky furniture and stuff across the country/world.

Anything not used for more than a year should be thrown away. Buy new ones when the need arises.

I agree that self-storage use needs to be well thought out, but self-storage is simply a cost tradeoff. $129/m for my garage back is well worth it, especially since I need to set up a workshop to start a business. $2000-3000/m in extra rent to move somewhere with an extra room isn’t.

Willingness to use self-storage might very well have made the difference in buying a house. At one point there was a nice duplex for sale that would have worked well for us. There were two problems: There was an easement on the driveway that prevented parking cars in it. That meant we’d either have to park on street (where the parking appeared to be tight) or we’d have to park in the garage which we needed for storage. Second problem was my husband didn’t want to deal with renters and he said “What are you going to do if they stop paying? You going to kick out an elderly couple?” I told him we’d count it as part of our tithe then and I’d reduce giving elsewhere.

I let the property go over the easement because my husband had been unwilling to pay for storage for, as he called it, “your stuff.” In retrospect, we absolutely should have bought the property. The value is now doubled, and even if renters had stopped paying, the monthly payments would still be less than anything we’ll pay now. Even just the back part as an SFH is now $500K more than the duplex price.

Self-storage is a tool like anything else. You ask what you need and figure out the cheapest way to get it. This idea that it’s somehow different from rent is incorrect. The idea that you need to buy a house to store all your stuff even if it means extra mortgage payments is incorrect. If you’re renting a place at $2-3/sq ft (which is current peninsula prices), then $1/sq ft is cheaper than that extra room. If it’s buying a duplex with an easement and then renting self-storage. Do it. If it’s staying in your current property to retain the original property tax, and storing stuff off-site until your kids leave and you can downsize, then do it.

Self storage generally costs the same as apartments in the same area per sf…it is best used as a temporary solution. …better to sell the junk or get a bigger place…it you own a house it is cheaper to put up to a 120sf shed in the back yard…i doubt self storage is $1/sf anywhere near the BA…the cheapest is in Stockton where rents apartments rent for $1/sf…

Self storage generally costs the same as apartments in the same area per sf…it is best used as a temporary solution. …better to sell the junk or get a bigger place…it you own a house it is cheaper to put up to a 120sf shed in the back yard…

Rents in that area:

Anyway what’s the angle to make money on storage units? None of the big players are selling franchise rights, correct? And mom-and-pops lack the infrastructure (like web interface to book and pay rent) and economy of scale. 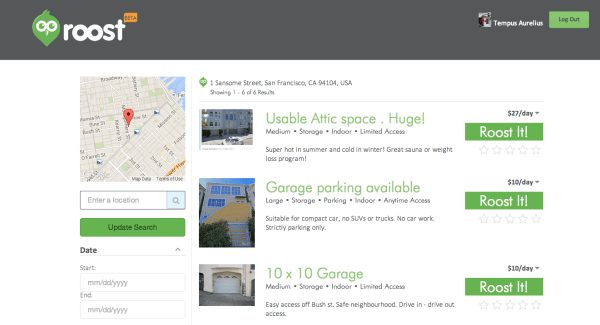 Roost Launches To Help You Store Your Stuff In Your Neighbor’s Garage –...

The idea behind Roost is not that different from any of those other marketplaces: I've got something you can use, you pay me to use it. In this case, we're talking about storage space, specifically storage space that can be found in your neighbor's...

You can rent out your garage for storage to earn money if you like.

Darn I was thinking if I can do a startup to cash on the storage boom. But seriously storing stuff in somebody else garage sounds a bit off putting.

When I lived in the mountains it was common to rent garages for storage. Many homes were second homes. Much less than traditional storage.

I continue to rid myself of stuff. The gift I plan on leaving my kids is nothing. Having cleaned out many houses of elderly relatives the least amount I have left for the kids to deal with will be great.

All the videos and photos are being put onto dvd’s for each child.

All the videos and photos are being put onto dvd’s for each child.

The thing is, paper turns out to out-last every tech format that has come and gone like waves ebbing and flowing: floppy disk, tapes, zip disks, CD’s, DVD’s, on and on. None of the Apple computers today have CD or DVD drives. Soon even flash drives will be gone…

Actual paper photo proves to be the longest lasting format of all. You don’t need special machines to see the pictures.

Store in the cloud.

I agree that paper will outlast media, however:

I guess we’ve been keeping our photos on the computers or possibly an external hard drive and moving them with us as we upgrade computers. Of course, we keep backups of the hard drives.

Cloud is certainly an option, but I don’t trust people with my stuff. I barely trust my husband with the backups.

My mom sends me photos all the time. Honestly, they end up in the filing cabinet. We don’t really look at them. So if the goal is to make transferring stuff easy knowing that they may never be used and may degrade, CDs are certainly fine. If you really want your kids to look at the photos, have a photo viewing party.

The gift I plan on leaving my kids is nothing.

PS: One of the nice things about your choice is that you’re not going to be offended by what will happen to your stuff afterwards. My parents have A LOT of stuff. My mom is attached to what happens to it after she dies. In fact she got offended that I suggested I would sell her jewelry (I don’t wear jewelry except maybe to dress up for the school auction once a year), and started talking about finding someone else who would appreciate it more. (Since then I have given birth to a daughter who will no doubt inherit all of it whether she likes it or not.) If my mom only knew what I would do when they die which is pretty much open up the house to freecycle, she’d be sick to her stomach.

You can’t take it with you when you go, but telling everyone else they have to keep it after you’re dead? No way!

Speaking of old photos, the Facebook function that resurfaces old photos from 3, 4, 5 years ago is mighty awesome. Seeing how cute my kids were when they were tiny babies makes me forget the little monsters they have become…

Maybe the solution to our photo problem is to upload everything to Facebook?