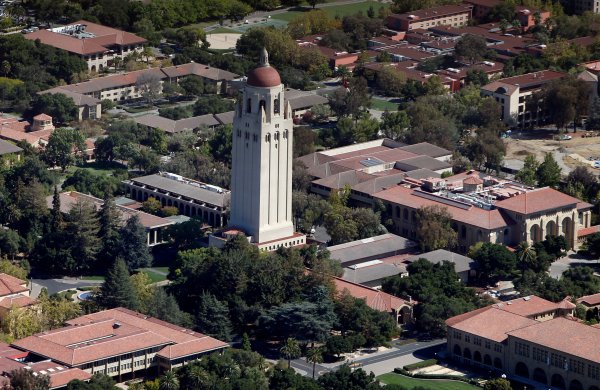 Four local schools rank in the top 10 best California four-year colleges by salary potential, according to a new report from PayScale.

Recent graduates of Stanford, Samuel Merritt, Santa Clara and UC Berkeley all earn north of $60,000 early in their careers and $130,000 after 10 years, according to the company.

Stanford takes the third spot statewide after Harvey Mudd, which takes the top spot nationally, and Caltech, southern California schools that award mostly science and technology degrees. Stanford graduates earn an average of $73,300 early in their careers and $140,400 toward the middle. Fifty-six percent of graduates surveyed say their work makes the world a better place and about half earn STEM —science, technology, engineering and math — degrees.

No surprise, schools that award a lot of STEM degrees tend to produce graduates with high earnings. But that’s not always the case. Graduates from Samuel Merritt, which has campuses in Oakland, San Mateo and Sacramento, earn an average of nearly $82,000 early in their careers but none have STEM degrees. The university offers degrees in nursing, occupational therapy and other disciplines where need is growing as Baby Boomers age.

Book considers the impact of Silicon Valley on higher education

Book details conflicting relationships between growing tech companies of the San Francisco Bay Area and local higher education. Despite high-profile successes of Stanford, book finds much to be lacking.

Too much media and brain cycles are spent on IT. I think we should look at the healthcare sector more. I have never heard of Samuel Merritt before this article but I am not surprised graduates of that school make good money. University of the pacific out in Stockton has a pretty big pharmacy program and graduates make 6 figures.

Have you heard of a nurse starting a billion dollar unicorn? That’s why people focus on tech. I agree focusing on it so much is a huge disservice to people. Very, very few people are going to start a company that becomes worth $1B+. Nurses can make $100k+ in the bay area. People aren’t going to change to healthier habits, so there’s going to be a never ending supply of sick people to treat.

Sometimes I have to wonder why software companies are worth so much.

Loss making SNAP even though is down from IPO is still worth $16B.
Loss making SHOP, $11B

I’m joining the tech fun but completely don’t understand why we want to pay so much for a promise which may not be realized. WB didn’t want to join the tech wagon, he bought AAPL only because it is priced like a traditional company… issues a good dividend, make good money, strong balance sheet, price/sale = 3.79 and a P/E (fwd) = 15 which is lower than the average for S&P, lower than COH

It’s the potential that <100 people can write an app that’ll be used by hundreds of millions of people. You can only get that sort of scale with software. If you get it, then you’re insanely profitable. Most will fail to make it. Businesses that sell physical items or services require lots of employees and capital to scale. Look at how much money Tesla has raised for model 3. I think they’re up to $7B. You could fund a ton of software startups with that money.

There are two ways to view the capital intensive businesses. Some view that as a liability, and others view it as a moat. Not all companies can go raise billions to launch a new product or business. If you do it, then you should have a decent moat that prevents competitors from entering.

It’s why I think traditional retailers are idiots for trying to fight Amazon online. It’s not their expertise, and they are spending massive amounts of money to cannibalize their in-store sales. The advantage of Amazon is selection. You can get almost everything on a single site. That’s way more convenient than going to a bunch of sites to order different things. Amazon is the modern shopping mall or giant strip mall where you can park in one spot and get everything you need.

I think the only traditional retailers that’ll thrive are the discounters (TJX, ROST) or ones that offer unique experience or expertise to shoppers.

Too much media and brain cycles are spent on IT. I think we should look at the healthcare sector more. I have never heard of Samuel Merritt before this article but I am not surprised graduates of that school make good money. University of the pacific out in Stockton has a pretty big pharmacy program and graduates make 6 figures.

I have friends who graduated from both programs (nursing at Samuel Merritt and pharmacy at UOP). Pharmacist is a dying profession. UOP friend tells me the picture might be rosy now but it won’t last.

How will pharmacist die as a profession? I think regulations require drugs to be filled out by pharmacists? Has that changed?

Pharmacists also work in hospitals as aid to doctors, like nurses. They don’t all work in drug stores to hand out pills. So their profession might linger on…

Amazon is the modern shopping mall or giant strip mall where you can park in one spot and get everything you need.

My sons are working on it now! Watch it! You may be out of a job soon

That would work, since it would create the convenience of one-stop shopping. For the consumer, it’s equally convenient.

When AI becomes smart enough many programmers will be out of a job. For example instead of programming a machine to play a video game you just let a general purpose AI observe enough game plays and it will learn. Think how many tedious programs can be eliminated.

On the other hand doctors and nurses will always be needed. Even if some AI can replace the diagnosis part of the job. Humans will always want the empathy of another human.

My grandfather was a pharmacist in 1920-1945…Lived very well, especially during the depression, pharmacists could sell booze legally. …My dad had a very comfortable childhood during a time of extreme poverty…His cousin was a bottlegger that became a Hollywood producer…Drugs are always a good way to make money. …lol

How will pharmacist die as a profession? I think regulations require drugs to be filled out by pharmacists? Has that changed?

Automation will kill most of the jobs especially retail pharmacists. Hospitals and pharmaceuticals might hire a few to control the robots but that’s about it.

I think pharmacist has better job security than programmers. And it’s harder to apply for pharmacy schools than engineering schools. Most people can get into CS and eng programs at lower tier schools, not everyone can get into phamacy school.

But regulation change could put pharmacists out of job. But if that lasted for centuries, why now?

Great stuff from our favorite professor!