And So It Begins - Uber Oakland

Uber is THE startup of this decade. Google. Facebook. Now Uber. It’s that caliber of a company. I think it can single handedly give the vibe to Oakland.

Need to load up on Oakland properties…

I think they are going public pretty soon based on the open reqs they have. I think quite a few people have left Facebook or Uber. They hired the head of security from Facebook awhile ago.

I am suprised how well Uber drivers do.I have a tenant who gets $3300/m in SLT…most people here are lucky to get $2k/m…Peanuts in the BA. …but big money in a resort town…

Recently, use Uber four times (can’t drive after vision tests and car maintenance). Three of the drivers are young graduates!!! So hard to find work? Some how I got the feeling, only the very good one get jobs, the rest has a hard time.

I actually used Lyft for the first and only time when we were flying really early out for Hawaii and I didn’t want to bother a buddy. Even with the first few times discount, the cost from Sunset to SFO still ended up being $30-$40. Doesn’t that sound high? Maybe, my cheapness is showing again but that means $50 reg price from just the Sunset to SFO??? Not doing that probably ever again. I mind as well leave my lil Honda commuter in an off-site lot so that I can drive to and from SFO.

Since this was our first time using a ride service, I asked the driver about how it was going doing this. Now, according to him, since he drives FT and does so in the city primarily he said he cleared $40-$50K. I thought that sounded high considering the expenses but that was what he said.

A buddy of mine retired and he is driving to kill time. You all are right, retirement can be boring (esp if all your buddies are still on the spinning wheel). I will ask him how much he is making out from this diversion. It allows him to get out of the house and you are chatting to people (who want to).

They keep sending me 50% off my next ride – trying to boost revenue or having ridership issues?

I think it’s cool Uber is moving to Oakland, but $8 million is very little spend on renovation of that size. If that’s all they spend, probably they are just demoing the partition walls, new flooring, and installing a fancy reception area.

Compare to the $20 million Apple put into this warehouse near proposed Bart site: http://www.bizjournals.com/sanjose/news/2016/05/17/how-apples-santa-clara-facility-is-throwing-a.html

I think it’s cool Uber is moving to Oakland, but $8 million is very little spend on renovation of that size. If that’s all they spend, probably they are just demoing the partition walls, new flooring, and installing a fancy reception area.

Compare to the $20 million Apple put into this warehouse near proposed Bart site: http://www.bizjournals.com/sanjose/news/2016/05/17/how-apples-santa-clara-facility-is-throwing-a.html

Not sure if you are ever down here by the infamous Millennium Tower or the Transbay Terminal but the Salesforce buildings are pretty nice. Not sure how they compare to Apple’s digs, but both the Salesforce building lobbies have these HUGE full maybe 20-30 ft wall sized projection walls I guess you call them where they project images and videos. Incredible. If these don’t cause fender benders or rear enders at this intersection I don’t know what will…

And so it ends…with a profit!!! 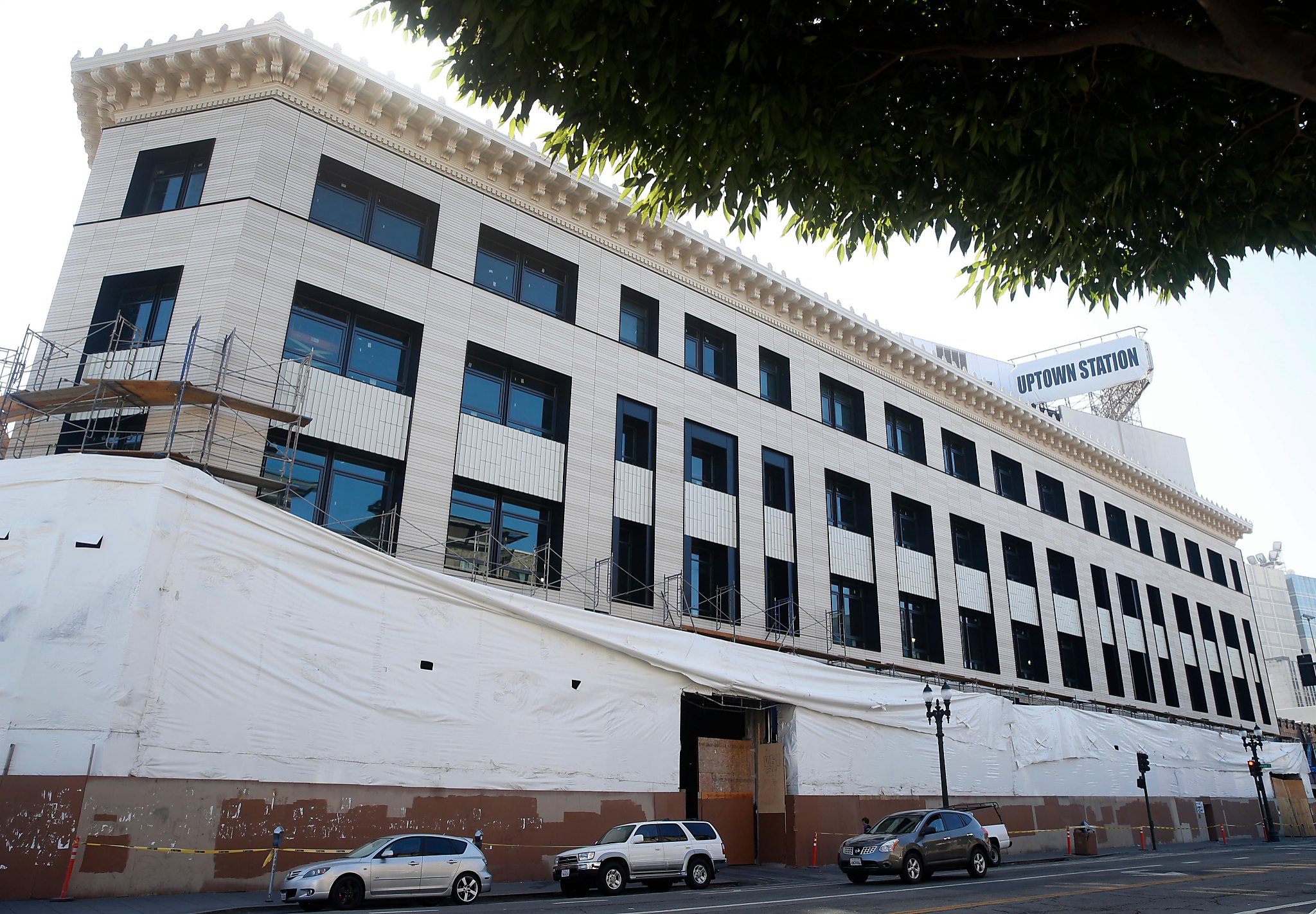 Uptown Station, a massive 1920s-era department store in Oakland, was bought by CIM Group from Uber, which had already abandoned plans to create an East Bay office there. Los Angeles’ CIM, an urban real estate investor and asset manager, paid $180...

Hey, Uber made a profit off something. Maybe they should become a RE investment firm.

Uber already spent some millions on renovation. Profit is not as much