DUBLIN – In a first for California, a public transit agency next month plans to begin subsidizing fares of people who take private Uber and Lyft cars to local destinations rather than riding the bus.

Passengers ordering Uber or Lyft car trips within two test areas of Dublin will be eligible to get door-to-destination service at a big discount under a partnership between the ride-hailing companies and the Wheels public bus system in Dublin, Alameda and Pleasanton.

“Our board is very interested in trying to use new technology in a creative way to improve service and efficiencies in suburban areas that are traditionally very challenging to serve,” said Michael Tree, the valley transit authority’s executive director. “We are the first transit agency in the West actively planning this type of service.”

Officials said the $200,000, one-year test is expected to begin around mid-September once a few technical details are worked out with the ride-hailing companies. Talks are ongoing to include a taxi company as well.

Fares would be limited to $3 for trips within West Dublin and $5 within the East Dublin project area – much less than the typical Uber or Lyft fare but more than the $2 Wheels bus fare, according to a report to the valley transit authority. 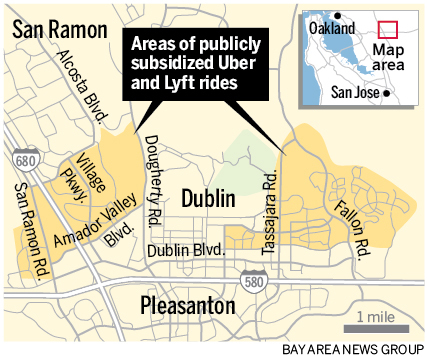 And the union is not happy…

this is a great option

Great option or not, this will backfire. Public transit is my game. And I can give you fifty reasons why this will get shot down and pronto. Title VI and “Social Justice” will be one of them. So will the Teamsters in this case. Plus, ATU will be weighing in too.

Oh, and by the way, I have a few long time colleagues that work at LAVTA. I haven’t had a chance to discuss this with them. But this isn’t a surprise considering Mr. Tree’s background in Montana. Yes, you read that right. He ran a small transit system in Montana where he bowed to his misguided board who wanted “free transit for all” and just wanted to get back to California. I competed with him for his position only he doesn’t know it. I didn’t even get an interview. He had connections to Scott Hagerty on the Board there.

// “Zero-fare” is defined as public transit service that does not require passengers to pay when using the system. Of course, someone or some entity is

Housing projects from the 70’s along with government provided housing on Native American Reservations and a plethora of other failed “free government facility experiments” should have shown us how people having no skin in the game destroy that which is provided gratis. But we keep going back to that same largess model.

Lyft and Uber should continue their models and avoid government all together. Lest they become mere taxi companies with government issued medallions and all that.

This is along the line of school vouchers. There will be a lot of political resistance, but the mood of the public is still pretty much against public unions. I like Uber’s chance here.

Yes manch. And how have those school vouchers been working out?

Yes, you heard that right. Transit systems were once private, for profit enterprises. And did pretty well. There were some famous ones right here in the SF BA.

PHOTOS: Check Out Muni Through The Years!

In the nearly century and a half since San Francisco's first cable car completed its inaugural run down Clay Street, the city's public transit system has...

But when push came to shove and some were teetering on insolvency or strikes shut down the systems such that changes were coming, the government began taking over to appease the riders who complained.

It went downhill from there.

The more things change, they more they stay the same.