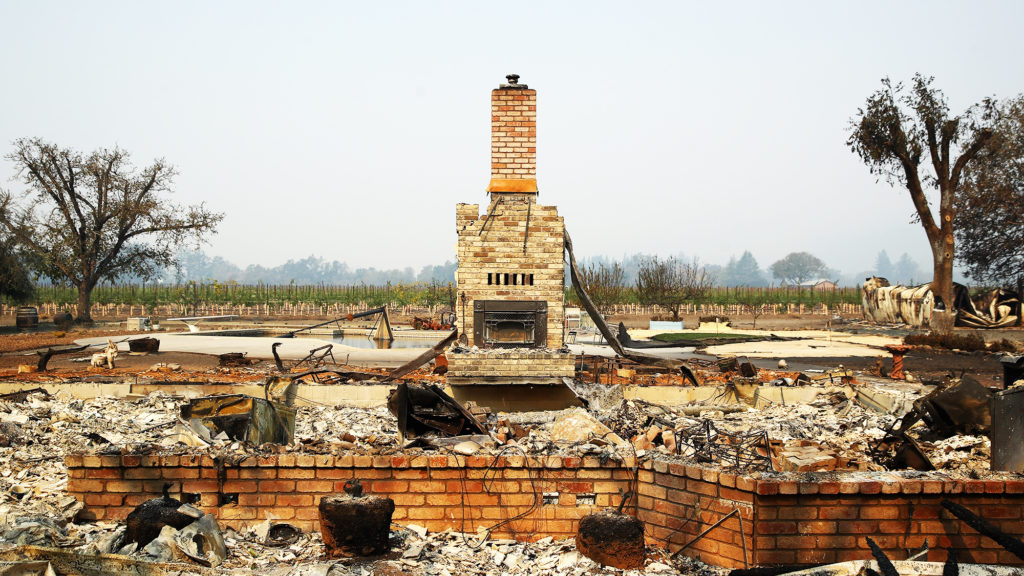 The wildfires ravaging Northern California's wine country will make the housing crunch even worse—it could take up to a decade to go back to normal.

Only about a quarter to half of the original residents whose homes were reduced to ash are likely to return and rebuild, Bell predicts.

Even homeowners with insurance premiums may not get enough money to rebuild their entire homes to what they were before, Bell says. That’s because the price of construction is likely to skyrocket with the extra demand for construction workers, for which there is currently a national shortage compounded by Hurricanes Harvey and Irma, and building materials. Some will get loans, others will tap into their savings.

Those who do rebuild are in for the long haul. The area is expected to recover only about 10% to 15% each year, according to Bell. That means it’s likely to take five to 10 years before homes, businesses (including employment and tourism), and the local infrastructure is back to normal.

Plus, they’ll have to find a place to live while they rebuild—which won’t be an easy feat.

“We had a housing crisis before the fire,” says Santa Rosa–based Realtor® Daphne Peterson, of Keller Williams Realty. “We’re in a very high-cost area. Our vacancy rate was about 1%. Now we’ve lost about 1,500 to 2,000 homes. We have no place for people to stay.”

Homeowners who decide to sell won’t have it easy, either. Those whose homes survived should expect the properties to sell at a 10% to 35% discount. That’s because it’s not as desirable to live near burnt-out houses or with fewer services and businesses nearby.

The Oakland Hills fire in 1991 was California’s deadliest and most destructive, according to CoreLogic. Twenty-five people were killed and about 2,900 structures on 1,600 acres were destroyed in the blaze.

One of the neighborhoods that sustained serious damage was the Upper Rockridge area of Oakland. It had been a middle-class community of Tudors, Craftsmen homes, and California bungalows built in the early part of the 20th century on narrow streets before the disaster.

But after the wildfire, it became an opportunity for many of the residents who stayed, as well new buyers purchasing empty lots, to start over. Most of the rebuilt homes were much larger than their predecessors.

Today, “it’s a highly sought-after neighborhood” of homes in the $1 million to $3 million range, says real estate broker Daniel Stea, of the Stea Realty Group in Berkeley, CA. The homes have been built to new fire codes, the streets have been widened, and there’s now a fire station up in the hills nearby.

“It transformed the area,” Stea says.

The homes in Santa Rosa could be rebuilt in a year…The City has an obligation to help and relieve the suffering caused by government bureaucracy. .The city of Oakland did a good job in 1991-3…Santa Rosa needs to get rid of zoning, fees and bs bureaucracy. .Let free enterprise turn an old neighborhood into a new paradise. .allow 3 stories, inlaw units…think 21st century not 20th century

I just upped the fire insurance on my townhouse. I don’t want to end up like any of the people in the fire zones. What I need to go back and find out from my agent and find out how long they pay temporary living expenses for. Probably not long enough. HO5 and HO6 policies usually cover the bare minimum and without a mortgage I don’t want to be the one covering it.

I know someone who lost their home in a SoCal fire before the great recession. She didn’t update her insurance coverage as the home skyrocketed in value. She assumed she was covered, since the mortgage company approved her insurance every year. She didn’t realize the mortgage company only requires enough insurance to cover the loan balance. She ended up with the land and way less than it’d cost to rebuild. I wonder how many people are going to find out they’re under insured?

I just upped the fire insurance on my townhouse.

Since townhouse HOA must be carrying the HOA master insurance that usually covers dwelling structure, you should check that you are not overinsuring since your insurance will only cover interior finishing. That’s one thing I am always concerned about with an HOA - the costliest past of a rebuild is covered by HOA Master insurance, so it’s more important to get the right coverage there.

Btw, is the landlord responsible for the tenant’s temporary accommodation in case of fire damage to property?

I just upped the fire insurance on my townhouse.

Since townhouse HOA must be carrying the HOA master insurance that usually covers dwelling structure, you should check that you are not overinsuring since your insurance will only cover interior finishing. That’s one thing I am always concerned about with an HOA - the costliest past of a rebuild is covered by HOA Master insurance, so it’s more important to get the right coverage there.

Btw, is the landlord responsible for the tenant’s temporary accommodation in case of fire damage to property?

No, the landlord is only responsible to refund the unused portion of the rent.

The master policy for the HOA covers up to the wallboard in the home. You have to paint and replace everything inside. Think about the costs to replace kitchens and bathrooms, painting and floors in the whole house. It will cost a bundle.

The master policy for the HOA covers up to the wallboard in the home. You have to paint and replace everything inside. Think about the costs to replace kitchens and bathrooms, painting and floors in the whole house. It will cost a bundle.

I was told by the insurance rep for my Master HOA policy that they’ll pay for standard finishing like laminate countertop in kitchen etc and my insurance policy will be responsible for the upgrades.

Might depend if you have and HO5 or an HO6, but I don’t know for sure.

An identical unit in my Santa Rosa complex went pending in one day. Yeah, they listed it on Sunday amid the fire.

The wildfire burned down a lot of housing supply while at the same time created a lot of demand from all the folks who got displaced. The areas that escaped the fire will see prices shoot up.

In the short term, there is a shortage of housing due to fire. However, what’s the long term economic impact? Will the wine industry and tourism industry incur long term loss and leave many residents unemployed thus moving away?

Cheap homeowners, most of us I guess, are paying the cost of replacement well bellow the current costs.

Those who anticipate or plan accordingly will rebuild with a smile on their faces, others will look at them with envy.

Where is the best opportunity to buy and build? Santa Rosa?

I think that helps if it’s a small kitchen fire or faulty wiring starting a house fire. A home sprinkler system is no match for a forest fire. That’s bringing a butter knife to a fight vs. full auto machine guns. I do wonder if their are stats on how many are saved by sprinklers though. I think pets are a main reason to have the sprinklers. They probably won’t be able to get out if there’s a fire and no one is home.

Gee…I swear, some people and their brains…

Nevertheless, while not all residents returned, some of those who did took the opportunity to build larger homes. Before the fire, most homes in the Oakland Hills were built in the 1920s and 1930s and had two or three bedrooms, with a median value of about $300,000 in the early 1990s. When the new homes were rebuilt in the mid-1990s, with five and six bedrooms and three-car garages, the median home value jumped to more than $700,000. Today, the median home price in those neighborhoods exceeds $1 million and ranges up to $4 million. And despite the continuous danger of fires reigniting in the area, it remains a desirable place to live. Those who did not return sold their charred land to investors, who built massive homes that are now selling at multimillion-dollar prices. There are many lessons to learn from the Oakland Hills fire, and many comparable stories will emerge from the disaster in the Wine Country.