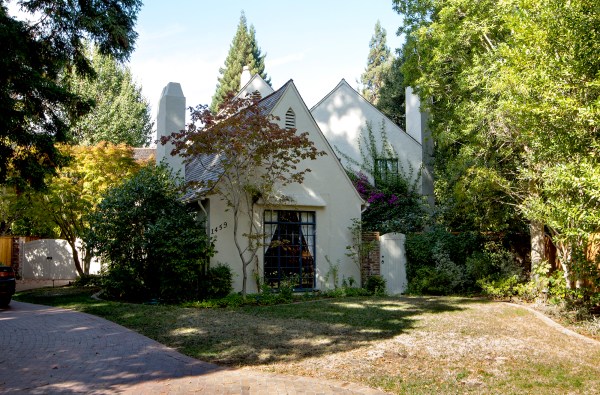 Couple that sold their home to Mark Zuckerberg for $14 million gets a...

The Shulmans thought their move from Palo Alto to Atherton would be covered by Prop 90.

Ron and Ellen Shulman were perfectly happy in their Palo Alto home of nearly 20 years. But when a company controlled by Facebook founder Mark Zuckerberg said it would pay $14 million for the property, the offer was too good to pass up.

It was a classic Silicon Valley real estate dream come true. They had paid a fraction of that for the house.

So, the Shulmans packed up and headed for tony Atherton, eventually settling into a home assessed at just under $7 million. The couple planned to use a state law that allows residents over age 55 to transfer their property taxes, in this case from the Palo Alto home to the new house in Atherton, without increasing their tax payment.

Reading stories like this makes me more eager than ever to vote for Warren.

You think there should be a wealth tax? You want to knock others down so you can feel better about yourself? Your outrage should be at the cities who still get a 5-8% revenue increase every year and cry that it isn’t enough. Their grossly irresponsible spending is the real enemy.

The best wealth tax is the inheritance tax. Just close the loopholes and we’ll be fine. Democracy and soaring inequality are not compatible.

Right, so dragging people down towards the median is the answer. People would care far less about income inequality if Democrats weren’t constantly telling people it only exists, because people are victims.

The story has nothing to do with inheritance or wealth tax. Just a disagreement with assessed values at its core

Just a disagreement with assessed values at its core

“Just because there’s a transaction,” Ginsborg said, “a transaction doesn’t determine the market.”

Is this the GAAP/ legal/ economic definition?

If owner sold the house to his brother for $1, would that be the market price?

If you allowed appraisal to be adjusted up, you also have to allow it to adjust down.

So you support your wealth being taxed at 50%+ so your kids get less? It seems counter productive to put so much energy into building the wealth to give half of it away in taxes.

It seems counter productive to put so much energy into building the wealth to give half of it away in taxes.

The animosity is stirred up by the left with class warfare. Sure people like the Kardashians make the rich look bad. But everyone tries their best to minimize their tax exposure no matter what their income. In fact in California fifty percent of low income workers pay no state income taxes. Equity would mean everyone should pay something.

What gives you that impression? They pay a higher percent of their income in taxes that anyone. The top 1% are paying 40% of the taxes collected despite being 17% of the income.

It all comes down to Romney’s effective tax rate which was 13%. The effective federal tax rate of silicon valley tech employee is ~25%. So the ultra-rich are not paying their share.

IMHO, after certain income, investment income should be treated as regular income.

Again, why are you just focusing on income tax? What about payroll tax? Sales tax? The “don’t call it tax” fees like those they put on your cell phone bill? I am not sure Jeff Bezos’ effective tax burden, if you include all the taxes and government fees, is higher than that of a person making minimum wage.

The whole idea of progressive tax system is that the rich should pay a higher ratio of their income because they can best afford it. The US used to have top marginal tax rate of 90% in the 50s and early 60s. It seems to do just fine back then. In fact, growth rate was much higher in the 50s than today.

Life isn’t fair. But as long as class warfare is ones focus instead increasing ones own talents and value, bitterness will overcome you. Bernie has spent his whole life as a bitter class warrior. What has he accomplished? Tend your own garden and stay out of mine. Paraphrasing Voltaire.

That 90% rate was because of WW2 . The government got greedy and held on to it till the 60s

Whatever the reason for the 90% top rate, I am just pointing it out that the economy didn’t crash. In fact it was enjoying one of the fastest growth in the last century. After 90%, it was 70%, and it lasted until Reagan.

In a democracy, expecting citizens to just resign to their fate is unrealistic. You can’t wish it away by telling people to try harder. What I am saying is that that’s fine. Don’t panic. We will be fine.

In the vast majority of transactions, the county assessor just blindly accepts the sale price as the new value.

I had 2 transactions, both in 2012, where the assessor called me and stated he would not accept my purchase price.

One was a SFR in Sunnyvale that I had purchased for $540k. The assessor challenged me to find an empty lot (or a lot with a house on it) for under $700k. I could not. The house was worth actually $750k. He set the value to be $700k and I agreed. To determine if it was an arms-length transaction, it helps to have it listed with a realtor and use a different realtor to represent the buyer. In that case, it was a pocket listing, and a poorly informed seller, and, well, a listing agent whom I would probably not ask to sell my houses.

In the other case, we had purchased for $640k, and settled with the assessor for $1m. We sold for $1.6m five years later.

It works the other way too. I recall that the LA Hills house that sold for $100m, somehow they convinced the assessor to assess it at $50m. Not sure how much effort was needed.

Do you even look at anything or do you just repeat the same talking points? The graph was income and payroll taxes. The other point on payroll taxes that you pretend doesn’t exist is 90% or people get more from social security and Medicare than they pay into it. Those taxes are actually progressive.

Rent and food don’t have sales tax. By definition, poor people shouldn’t be buying much else, so they aren’t paying much sales tax.

Do you realize the Scandinavian counties have a regressive tax system? They don’t have the deductions so everyone pays 40% income tax plus they have a highly regressive 25% VAT. That’s how they afford all the social benefits that you want.

Do you realize how few households qualified for the 90% rate vs how many qualify for the 35% rate today? Even Kennedy said the high marginal rate was holding back economic growth.