It's National Night Out in East Palo Alto, and Mayor Larry Moody hops into police Cmdr. Jerry Alcaraz's black SUV. They've got a busy night ahead -- several blocks in the city are having parties. The

Completely gentrified… we all missed the boat!!!

Will EPA stay the cheapest city in peninsula? Which city will fall below EPA?

If you read local news you will see that EPA residents getting involved in murders in RWC, east bay, San Jose etc… but not in EPA itself…

Hmm, they commit murder in other cities to prop up their property value in EPA? What a bunch of selfish criminals

we all missed the boat!!!

No, not at all. Still EPA is too good compared to other bay area standards.

That happens when you are a coward and listen to the “oh, here, that town is full of criminals”.

I lived there for about 11 years, I confronted the thugs on the street, I befriended them, I knew them, they knew me.

I knew many Indians living there. Most of people changing that city were from the Hispanic community that started changing its looks. The rest was a mixture of a Asians, Blacks and a few White people, something I can’t confirm but for the time I lived there I realized most people were afraid of EPA because of its reputation, not for what was going on the streets.

Why do I say cowards? Because the same story was told to me when I thought of buying in ESanJo. Oh, they kill there, oh here and there…bunch of cowards missing the point.

Buy when there is blood in the streets…No more blood, time to sell…

4x return in EPA. Should have bought.

Except that EPA will still go up, but not at the same rate. Schools aren’t good enough. Better to buy in similar areas in RWC (North Fair Oaks) with schools of choice ability to move to other schools.

In EPA Rent control for multi family (more than 4 units) and few other exceptions. But no rent control for Single Family House. Almost all (95%) rent control housing in EPA located in Woodland park apartments (west part of EPA) which belong to Sand Hill Property. One of cofounders of Sand Hill Property “Mr. Pau was born in Shanghai and raised in Hong Kong”… (from website). I don’t think those guys will keep things “as is”…

The only direction of change is worse and worse rent control. Unless Supreme Court can strike it down

I don’t think those guys will keep things “as is”…

That happens when you are a coward and listen to the “oh, here, that town is full of criminals”.

Buyinghouse, you were the one telling us these stories. Are you saying we shouldn’t listen to you?

Just to confirm that Sand Hill invested money in EPA not to keep everything as is. Actually its a great idea 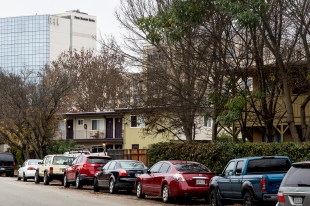 The largest owner of apartments in East Palo Alto is proposing to demolish 160 rent-controlled units and to replace them with 605 apartments, some of which would rent at market-rate.