EMERYVILLE, a tiny city of 12,000 lying on the eastern shore of the San Francisco bay, is rather cruelly known by residents of its bigger neighbours primarily as a place to buy furniture. A huge IKEA, a Swedish homeware shop, greets visitors to the city, which has no fewer than four shopping centres. But Emeryville has a better claim to fame; its many shoppers are served by some of the best-paid retail staff in the country. Since July 2015 the city’s minimum wage, for all but the smallest firms, has been $14.44 an hour, nearly double the federal minimum of $7.25 and almost 50% higher than the state minimum of $10. Emeryville is one of dozens of cities across America to have boosted its minimum wage in recent years, but it has gone further than almost any other towards the $15 campaigners seek.

That goal emerged in New York in 2012, when 200 fast-food workers went on strike demanding higher pay and a union. Those strikes were repeated, grew, and then spread nationwide (the last national strike was in April). At the same time, local politicians began to take action. After more than a decade with barely any changes to local minimum wages, they rose significantly in a handful of places in 2013. The next year 12 localities raised them, including Bay-area cities Berkeley, Oakland and San Francisco. In 2015, sixteen more, including Emeryville, followed suit.

Minimum wage is a nuanced issue. Like the article suggests, the mere existence of it doesn’t necessarily harm the economy. We have social welfare net, so we are not a dog-eat-dog purely capitalistic society like what we read in Dickens’ novels. But a big hike may indeed does harm. 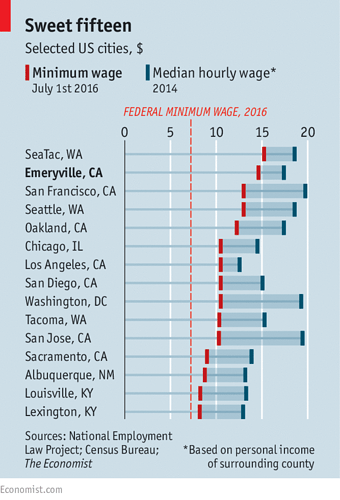 Our country is too big with too varied a cost of living. We should leave minimum wage up to the local levels.

I’m curious how it will play out. I bet we will see more automation eliminating minimum wage jobs. The higher wages change the ROI calc on the investment in automation.

I am thinking of opening my own milk tea shop. And a large part of my thinking is how I can minimize the number of staff. Humans are expensive and salary is just one part of it.

Minimum wage staff are a pain. You always have to schedule more than needed. The rate of absenteeism is crazy. It’s bad when showing up, being on time, and not buzzing/high are the standards for being a good worker.

am thinking of opening my own milk tea shop. And a large part of my thinking is how I can minimize the number of staff. Humans are expensive and salary is just one part of it.

Eatsa just opened several down by the Embarcadero in SF. Weird to see no humans…

Weird to see no humans.

We will all get used to it. There was a time when elevators have operators in them. And people got scared stepping into the first “automatic” elevators.

The checkout lines are just prime targets for automation. Job is mind numbingly meaningless. “So you just scan each item on the scanner?” Yes, that’s it.

Some Safeways do have self-checkout. I hate self-checkout. Worst software ever. Very slow. I always go to the person even if it means waiting longer unless I really only have one or two items and they have a barcode.

When you have a tea shop or a coffee shop, a smile is important. You may hurt yourself by being so frugal. You can say that we’ll get used to it, but no, we won’t. As human beings, we are a social animals. Lack of humans in a place we go for social contact is a negative. I like waiters, I like bartenders (well, ok I don’t ever go to bars, but if I did, I would want to chat with one), I like my kids. Do you text your kids at dinner to talk to them?

By automizing the mind numbingly bored tasks away, we can employ humans to make other humans feel good. That’s not a stretch. Most people who think about our robotic future agree women will come out ahead in our AI future. Women are better at empathizing with other humans, while men are mostly driving trucks and doing manual labor whose jobs machines will annihilate.

Ok, interesting diversion from thread to this about automation and humans being social animals needing contact. Let’s be honest, a lot of parents are not raising “social animals”. Their kids are hiding behind computers and phones. Come on, admit it. You all are to blame for that…

Before you counter, do your kids interact willingly when guests come to your home?

Do you allow them to play with computers or phones whenever they want?

What do you do specifically to teach your kids to be social? My lil sis does not give her kids cell phones/computers and makes them do old fashioned chores around the house and they are required to engage with people as much as possible. Other kids, buried in phones and computers… sad

I am thinking of opening my own milk tea shop. And a large part of my thinking is how I can minimize the number of staff. Humans are expensive and salary is just one part of it.

Are you still thinking about a milk tea place?

Are you still thinking about a milk tea place?

Yeah, but mostly just thinking. In SF there is a shop called Boba Guy that’s pretty hip and surprisingly popular. They also do bottled milk tea. I saw it in Rainbow Food.

Self checkout isn’t automating anything, though. It’s outsourcing to free customer labor. That said, I also prefer to self checkout because I’m faster than the people they hire at Safeway, I don’t have to make eye contact with anyone, and everything I weigh gets rung up as “bananas” at $.39/lb

Self checking is cutting off a middle man. In the old days 1-2 centuries ago, people do everything themselves. With automation, we may go back a little more to self sufficiency. You do not need many people to provide service to you since many things can be done by using some sort of machine.

Once people get back to self sufficiency, tax rate will fall to almost zero. 1-2 centuries ago, people pay very little tax. They even start a war over a petty amount of tax, unbelievable!

I didn’t realize Boba Guys had moved beyond the store front. That’s cool to see.

Has anyone looked into the basics of opening a boba shop? I wonder what the numbers look like. It seems like a big part of being successful is consistently delivering a good experience.

I still tell my wife I will do a bubble tea shop, eventually. I think location is key. The quickly shop at stonestown is doing great business but both food and experience is decidedly meh. It benefits from lots of foot traffic from SF State nearby.

What’s the typical startup cost and annual profit expectations? I think it’s a low cost and low risk business. But for a novice, it could still be time consuming and also many operating lessons to learn.

I don’t like Boba guys. Not enough variety and the tea is just so-so.

If I ever open my own boba shop the boba guys will be my model. The Chinese shops can have menus running 100 items long and it’s just a logistics nightmare. Their tea may be weak but customers seem to love them. Their mission shop I went to had people lined up outside.

Go upscale? I’m not a fan of tapioca balls, but I do enjoy tea. However, I never go to boba shops. Maybe they have evolved since the last time I went, but I’d like a nice place to sit and drink the tea, not like some metal chairs in a tiny shop. People will pay more for a starbucks or teavanna type experience

But I guess it depends which market you are trying to hit. If you want to absorb the non-asian customers, you gotta give it a more westernized. Feel.