Financial Samurai: How did I become a multi-millionaire?

So much of my wealth has been created through luck. The key was not taking my luck for granted and continuing to save and invest aggressively, as if my luck would run out.

I got crushed during the financial crisis and made a poor investment in a Lake Tahoe property in 2007, but I have kept on going no matter what. I expect misfortune to fall upon me again, but hopefully I’ll be better prepared.

It’s hard to keep the faith, but you must during the most difficult times. If you continuously put yourself out there, sooner or later good things will happen!

Below is a snapshot of my various passive income investments to hopefully hold us over during the next recession. I’m focused on building my Alternative Investments, since I have more control over their outcomes. 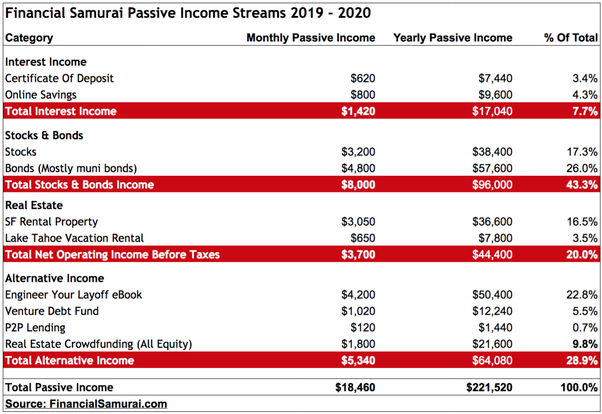 Real estate crowdfunding is the investment I’m most excited about after reinvesting $550,000 of my SF rental house proceeds in lower cost areas of the country with much higher cap rates (2.5% vs 10%). I’ve got a total of $810,000 invested in real estate crowdfunding and plan to slowly build a larger portfolio for passive income because I no longer have time managing rentals as a stay at home dad.

Remember, you only need to get rich once . Once you’ve achieved a level of wealth where you never have to work again, focus on capital preservation. The last thing you want to do is return to the salt mines!

He emphasizes luck. Some if it is reasonable - he had to be in the right place to get that recruiter call and buying Real estate in one of the few places in the country which soared. But investing in VCSY without providing analysis is like gambling. I guess he doesn’t do stuff like that anymore.

Right. He is not a savvy investor. He is a media guy who makes money from selling ads and selling them ebooks. His RE investment return is mediocre in BA.

He did not disclose the monthly income from his $7M website. What’s your guess?

@manch read how to become a multi millionaire won’t make you one. Take action to be one

There you have it. Add $7M to your networth. Just like that $10M net worth.

Sam Dogen is not rich. He is fairly conservative in his investment. He worked for 13 years in financial industry, making less money than good engineers.

He has $3M now and has a website which maybe worth $7M. Who has more money than Sam? Raise your hand

I admire his writing skills and his down to earth fiancial literacy. Strangely, he never published his photo. Is he a Japanese or Asian?

I’m very sorry to badmouth your hero, I just feel obligated to tell the truth.

He is very wise to tell people to DIRE and not FIRE. He is a good man, very honest. I have a lot of respect for him even though I did not follow him much.

How is the website worth anything?
Where is the income generation?

Are you implying that manch’s net worth is only $3M?

Are you implying that manch’s net worth is only $3M?

Didn’t he lose some money to stock gurus?

Why you crying over him?

Crying for him, not over him

Ok why you crying for him

What? Should I dance when people lose some money? What kind of person do you want to be?

There are many grave dancers on this forum for sure…

Any lost money doesn’t go to you whether you practice grace dance or not. It’s better to have a big heart

Then go donate 90% of your networth to charity right now.

No, thanks. I don’t trust them. You are the best friend to yourself