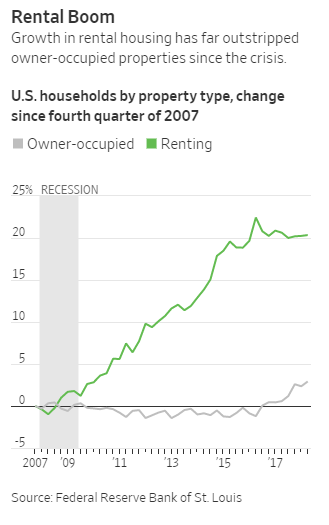 The McLean, Va., company already is the country’s largest backer of apartment loans. The deals announced this month are part of its push to finance more rental-home purchases as investors are eager to put money to work in rental markets and as growth in the firm’s traditional single-family home-mortgage business has slowed. Investors said the move could help fuel the rental boom by keeping a lid on costs at a time when U.S. interest rates are broadly expected to rise.

“Having Freddie in the business will bring down the cost of capital over time,” said Beth O’Brien, chief executive of CoreVest Finance, which lends to smaller landlords and bundles the debt into securities. Freddie guaranteed $161 million of debt sold by CoreVest last year in its initial rental deal.

Freddie Mac and its larger rival Fannie Mae don’t make loans, but buy loans from lenders and sell them to investors as securities, guaranteeing that borrowers will make their monthly principal and interest payments. Their scale and government backing typically allow them to borrow at lower rates than others.

There have long been millions of U.S. homes for rent, yet it wasn’t until last decade’s foreclosure crisis that investors were able to buy properties at prices, and in volumes, necessary to make big rental operations profitable. Though home prices in many markets have risen past their 2006 peaks, investors keep buying houses at a rapid clip, a bet that more Americans will rent rather own.

Investors funded the buying spree by tapping private-equity funds, negotiating bank loans and selling short-term bonds backed by rents. The arrival of Freddie and Fannie is an important endorsement for the business as well as a move toward standardization of how it is financed, investors said.

“We have long felt that it was important for us to serve this portion of the rental market,” said David Leopold, who leads Freddie’s single-family rental initiative. “If you look at the segment of the population that single-family rentals support, it’s generally larger families with lower incomes than necessary to purchase.”

Freddie has required that at least three-quarters of the homes in each of its deals are affordable at 80% of the area median income at the time of underwriting, though Front Yard executives assured investors on a call last week that there is no limit to what the company can charge in rent for the 4,813 homes it posted as collateral over the life of the 10-year loan. Separately, Freddie this month began offering lower-cost financing to apartment owners who agree to cap rent increases.

Still, Freddie’s affordability requirement will likely prevent it from financing homes for some of the country’s largest rental-home firms, such as Invitation Homes Inc., which tend to buy pricier homes. Invitation charged an average of $1,725 a month during the second quarter, compared with an average of $1,032 for the homes in Freddie’s announced deals.

Fannie last year guaranteed about $945 million of Invitation’s debt in a deal that drew criticism from realtors and others who viewed it as support for rich institutions that compete with typical home buyers for a limited supply of houses in some of the country’s top housing markets.

Backed by Blackstone Group LP, Invitation owns the country’s largest pool of rental homes, with more than 82,000. It put up 7,204 houses as collateral for the Fannie loan.

Freddie was authorized by its regulator, the Federal Housing Finance Agency, to fund up to $1.3 billion of loans for single-family rental homes in a test run. About $700 million of the allotment has been committed in announced deals and the rest will be soon with loans that are in the works, Mr. Leopold said.

Fannie’s and Freddie’s involvement also marks a shift for their regulators, which in 2012 blocked Freddie from backing bulk buyers of houses over concerns that banks wouldn’t be able to compete with its cheap debt.

Write to Ryan Dezember at ryan.dezember@wsj.com