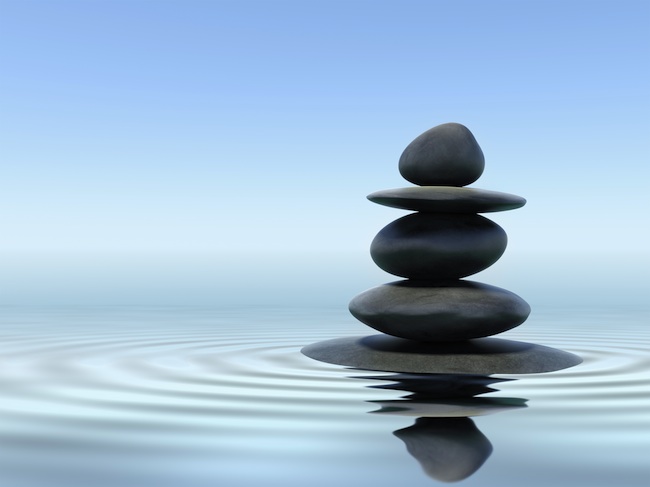 A timely article for me as I am in the process of renting out my old place in San Jose. Many of the points may seem like common sense but it’s good to have an article to tie everything together. Even though I own multiple rentals, most are managed by property management companies. So I am not that experienced as I should be…

He wants his tenants to make at least 40X the monthly rent in annual income. So 1K rent = 40K yearly income. What do people think? If I require that I may need to wait a long time to find Mr. Tenant.

@sfdragonboy this chart is for you 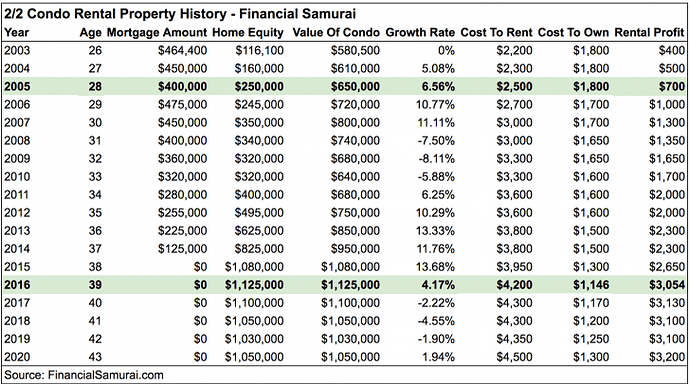 I bet SFHs went up more in that same period. Again, don’t like HOA fee. I like to buy fixers anyway so that means SFHs that have inlaw or addition potential. That is not happening with condos.

He wants his tenants to make at least 40X the monthly rent in annual income. So 1K rent = 40K yearly income. What do people think? If I require that I may need to wait a long time to find Mr. Tenant.

If he said 3.3X annual rent for yearly income would that make it better?

After taxes, at the high end, that’s still up to 50% of take home pay on rent.

Seems pretty reasonable to me not to allow anything more than that.

Income, job history, credit report and rental history will tell you much about a tenant.

It has been harder to rent out a hom I’ve lived in opposed to an investment property. The hurdle to get over it being my house that I upgraded can be huge.

The property managers that I’ve worked with are cautious. They hate it when they have to tell the owner the tenant damaged the home in an expensive manner r skipped out.

A 40 year old changing jobs yearly is much different than a 28 year old doing so. A late payment doesn’t really mean much unless there is a pattern to it and it’s across many accounts.

I like tenants who are stable, low debt and I like to see what they drive. All too many of friends kids are moving home in their late 20’s to early 30’s because they bought expensive cars which left them with little after fixed expenses were paid.

If he said 3.3X annual rent for yearly income would that make it better?

Yeah, that’d have made me feel better.

I paused because I would not rent to myself if I used that criteria, with the rent I set for my place. But that’s what the current market is at I suppose.

It has been harder to rent out a hom I’ve lived in opposed to an investment property. The hurdle to get over it being my house that I upgraded can be huge.

Tell me about it! It feels like marrying my kids off…

Even though I own multiple rentals, most are managed by property management companies. So I am not that experienced as I should be…

Whaaat??? How can our fearless leader not be a hands-on owner???

Most people I know manage their properties themselves. And no, these people have money, kids too and work demanding jobs. The fact is (IMHO) property management companies DO NOT do as well of a job as an owner would. Why should they? They are already getting paid.

So true. Happens to the last landlord of every homeowner

Whaaat??? How can our fearless leader not be a hands-on owner???

From the previous forums, I thought that most of the investors there were using PM companies. I do not particularly like PM companies (in fact right now, I absolutely loathe them), but I do understand wanting to have someone hardnosed enough to kick out an elderly couple if they stopped paying.

Personally, if I can avoid it, I will never rent through a PM again. It has been a horrible horrible experience. The communication between the owner and us has been muddled with multiple parties saying different things. If I’d talked to the owner in the first place, about what they wanted for their property, I would NEVER EVER have rented this place. But we were told one thing by one employee at the open house, and then were told something else during the walkthrough at which point we’d already told the moving company to deliver our stuff.

The most recent f-up was that the PM company sent a guy to do our annual inspection. He’s not our normal property manager, I’ve never met him before, he came in the wrong month, and no letter was sent regarding notice of this inspection. I’m not one to make someone feel bad, but when some random guy shows up wanting to enter my house while I’m home alone, I have to treat him like he might be committing a crime. They weren’t answering the phone when I called to verify him. I went ahead and let him do the inspection, but after I wrote one of the coowners of the PM company to let them know what happened and suggested they give courtesy calls the day before in case the mail got lost, they never responded to my message.

If it happens again I won’t. But I wasn’t sure that I hadn’t simply misplaced the letter. I normally try to keep on top of anything from them–open it immediately, but I am not the most organized person. (Although, he did admit that the front tenant hadn’t received a letter either, and I’m sure she really keeps on top of stuff from them.)

I wasn’t sure what to do, so I stood outside and told him to go on in without me. If he intends to case the joint, have fun scouting out the 1 Million LEGOs my kids own. Then he started trying out keys from boxes on my door, and it was clear he had our keys from the PM company’s key-safe. So I went ahead and went in with him. In the future though, I think I will take a photo of anyone I don’t recognize and text it to a friend across the country for “insurance.”

From the previous forums, I thought that most of the investors there were using PM companies.

Ok, did not know that. Most of the people I know who do it of course are mom and pop owners with fairly small properties (under 5 units per). I suppose at some point if I really loathe the dealing with the properties I should/would go with a property management company but I can just see the places going to crap as a result. With no kids, I probably would just downsize and keep the most positive cash flow one as an income source during retirement. That is the one thing I learned from dear old mom, real estate owning is the key to financial freedom and independence.

I’m totally a hands-on person myself, but it sounded like some people preferred not to get “emotionally involved” with their tenants. But there were others that certainly didn’t want to pay the extra fee for something they felt they could handle.

I don’t think the places will go to crap with a PM company. It’s your choice what you want to fix. Our current landladies have no desire to do upkeep on our house, and do the minimum necessary. But they are the ones that set the tone without a doubt, so when the inspections happen, I only point out the really broken stuff. Why point out anything else? Just makes me seem like a demanding renter. But in previous rentals, if there was something wrong, I always let the landlady know. Whether they fixed it or we did or nothing happened was up them. It was my job to inform. Here, my job is to keep quiet, improve a little here, a little there, and make sure I can take it out when we leave.

Not to cause a ruckus, but, all my personal favorite tenants just happened to be females. At the same, my one and only really bad one to this point was female too. (Yes, I have rented to many males too!). The ironic thing is that my favorite tenant of all time was an early retiree so her income was primarily from a pension. I also had a college student whose parents co-signed but she was perfect for many years. Go figure.

Since I actually make the decision on tenants, here are my personal thoughts and cues as to what I want to see in an candidate:

I would disagree on this one. I think you’re way better off having them nail down what you want from your tenant before they sign the lease. Asking questions once they’re your tenant means they aren’t interested in what you as a landlord want for your place and will push boundaries, not ask for permission, or you guys won’t get along.

Think about it–if you were going into contract for anything–a house purchase, a job, contract work, etc. don’t you want the details hammered out before you sign? Would you want a contractor who didn’t ask “Do you want high-end appliances, middle-end, or low-end?” “Do you expect 2 coats and primer, or just one with primer mixed in?”

Manch, Looks like I have made you a Fin Samurai regular. I should ping him and ask my cut for additional traffic

he makes quite a bit of money with traffic to his blog. JK

I draw the line at one hour drive. If the rental is farther than that I hire the management out. I am not handy at all. So to deal with maintenance stuff gives me a fair amount of stress.

@RealEstatebull not sure when you started reading FS but I have been a semi regular reader for a year or two. A friend of mine is a fairly famous personal finance blogger (who shall remain anonymous) told me about him. I like the fact that he’s a Bay Area local. The scale of money is just so much more than someone from middle America, who I can never quite relate to.

Obviously, when I am the buyer of something, I ask every dog gone thing too. It totally depends on which side of the transaction you are on.

Well, I guess you’ll never rent to me

After our experience in this rental, you bet I’m going to ask everything ahead of time! I’ve learned that one cannot make reasonable assumptions about how someone else will keep a house anymore. I should also have gone with “What you see is what you get”, but I never thought I’d rent a place where someone thinks it’s ok to have termites eating through your kitchen cabinets and killing trees and plants is what you hire gardeners for.