Ok, The Donald Has Spoken Regarding Tax Cuts

SECRETARY MNUCHIN: Correct, we are going to eliminate on the personal side all tax deductions other than mortgage interest and charitable deductions.

The standard deduction is $25200. State tax is not considered in itemization(void). Their Mortgage interest is $22000.

A family rent a home, no mortgage, with same pay. They pay the same $99800 taxable income.

High state income tax states like California and New York is getting affected.

High end earners, such a dual income in bay area makes appx 250k, they pay appx $20500 as state income tax which will not be allowed in itemized deduction as per Trump.

See, haven’t I been saying not to buy condos from Day 1?

The Trump plan could, at the margin, make renting a home more attractive financially than buying one.

…nullify the current tax benefits of owning a home for the vast majority of tax filers,” and could cause home values to “plummet,” the National Association of Realtors said in a press release.

Since renters do not get rent payment deduction, it’s ok for homeowners to lose mortgage interest deduction.

Make that happen @BAGB, a round of chicken wings are on me!!!

That’s what they want

Current economy model is based on population and debt = money. Population growth + growth in debt = economy growth. Do you have an alternative model?

It would benefit over 90% of the country. Now everyone that stayed silent about taxing the 1% thinking it won’t affect them are coming to the realization the government will reach below the top 1% to increase tax revenue. Simple math shows taxing every dollar of top 1% income wouldn’t close the budget deficit or satisfy the government’s desire to spend. The top 10% aren’t a big enough voting block to do anything about it. Congrats on the realization that we have a target on our backs, and most Americans want the government to take more from us and redistribute it in the name of fairness.

In the name of looking good in his 100 days, something Twhitler didn’t believe in, he has thrown anything at the wall expecting something to stick. It’s all about ego, nothing else.

Buying confidence is at the lowest level, people are scared of this guy. We don’t see any action in congress if it wasn’t to nominate the supreme court guy, otherwise the constant signature of EOs and the usual photo opportunity is in the menu, every day.

He is killing the environment, selling our national monuments, allowing oil, mine exploration on them. China is developing a clean and renewable industry, solar is a big time over there, he is reviving coal. China is closing their coal power plants, this petulant guy is opening them. We are going backwards in history.

Last night I met more people than I have ever met in my meetings. Many real estate guys saying something is going on, but they are afraid to speak up. 401Ks are being mentioned as a way to explore if they can be cashed out or not. Most said “are there any other options than real estate?”

Same as in real estate, speculation is what drives the market sometimes, or most of the times. Why not throw the notion of eliminating the property tax as a deduction, and even if the new taxes work better with the first $24K taken out, people drive their feelings on speculation. Nobody wants to find out it was good or bad at the moment they do their taxes, that’s for sure.
Nothing better than a guy who wakes up twitting, throwing stupid things online, pissing off people and countries, none the less, the new tax cuts helping more the rich than the media class.

Trickle effect economics has never worked! Time to bury it.

It would benefit over 90% of the country. Now everyone that stayed silent about taxing the 1% thinking it won’t affect them are coming to the realization the government will reach below the top 1% to increase tax revenue.

You’re likely correct that less than 10% are worse off but billionaires are not part of that 10%. Billionaires are likely to gain the most since many of them run their life around LL and corporations, dropping tax rate to 15% benefits them tremendously. To hide this from plain sight, sugared peanuts are given to the 90% less the billionaires.

True, but how much benefit can you give to 42% who pay zero income taxes? You can’t lower their taxes. The only way to make it better for them is create credits to give them free money.

But he was against Goldman Sachs and wall street during his campaign to gather some poor and down to earth and ignorant people voting for him. Then, he hires them. Duh!

All told, Fortune 500 corporations are avoiding up to $767 billion in U.S. federal income taxes by holding more than $2.6 trillion of 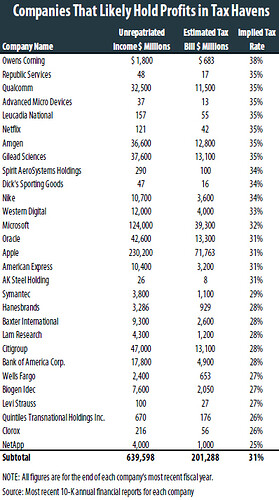 Since renters do not get rent payment deduction, it’s ok for homeowners to lose mortgage interest deduction.

We are playing games? OK…

I propose to tax everybody the same at 40%, no depreciation on anything, no 1031 exchange, no property taxes to be paid, no exceptions for anybody. You buy and sell anything, a home, a car, go ahead, we thank you, now pay your taxes please.

Except we are forgetting some things are voted in by we the people and uncle Sam is not involved, or can’t change a thing about it…somehow.

I propose to tax everybody the same at 40%, no depreciation on anything, no 1031 exchange, no property taxes to be paid, no exceptions for anybody.

Flat rate of 20% for corporate tax, personal income tax and capital gain (both long and short term) tax.
Standard deduction of $25k per person.
No other deductions allowed. Hate all those hair splitting special interests. They should take personal responsibility and manage their own problems.

I hope the $25k deduction is per household but I agree.

Flat tax rate, same tax rate for individuals and corporations, will greatly simplify the tax code. We should have a tax code which could be covered in 1 page instead of thousands of pages.