I was thinking about switching to induction cooktops in some of my smaller studio rentals instead of going with the gas and full ovens. Figure this would be safer overall. In time, if pricing goes down, maybe go full induction ranges in the bigger units. Yes, tenants would have to get certain types of pans/cookware and we can negotiate something on that. Thoughts???

I cook most of our family’s meals & my personal preference is
1)gas
2)induction
3)electric
In an apartment/rental, I’d probably be happy with induction. In the next home we buy, I’d convert to gas if it was induction upon purchase.

Wait…would you get rid of the oven? Back in my younger days, I’m pretty sure that would have passed on a studio that didn’t have at least a tiny oven.

I was thinking about this some more. The only fire I have ever witnessed was when I lived in an apartment in Palo Alto and the family had a broken stove that they couldn’t get management to fix so they used a hot plate. If I owned rentals, I’d rather have a traditional oven/stove to prevent the tenant from making an unsafe makeshift kitchen with hot plates and toaster ovens.

Wait…would you get rid of the oven? Back in my younger days, I’m pretty sure that would have passed on a studio that didn’t have at least a tiny oven.

Well, that’s the thing, I prefer not to take it out, but if induction cooktops/appliances were so good (sounds like you don’t care for it) then I would seriously consider Xing out the gas. Small studio, young techies or post college students who don’t cook much is my target audience/strategy. Sure, my wife would kill me if we got rid of the DCS gas stove I put in our home originally but my lil sis put in an induction cooktop in her last remodel at her Emerald Hills home and she swears by it (granted she still has an oven). Just trying to figure out what is now considered good, and safe. Sounds like you remain in the gas cooking camp. Ok, not surprising. Thanks!

I personally would not buy induction for various reasons. I might even pass on a rental because of it, but it wouldn’t be a deal breaker if everything else was good.

However, as a safety issue in a rental, I totally understand that decision, and I think it’s a good idea. Some people might see it as a plus, especially people with young kids. If you’re renting to a techy, they might not even cook, so they really might not care.

Here’s a model with an electric oven: 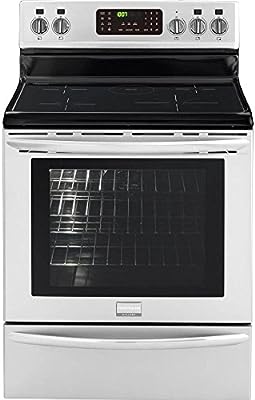 I personally would not buy induction for various reasons. I

From what I am reading online, induction seems to have many advantages over gas. More efficient and potentially the ability to save some space by replacing the double ovens is a plus, no?

I reserve the right to change my mind on this, and I don’t think you should hold my opinion in much weight. If I had to take one or the other, I’d rather have an induction stove in the kitchen than a wifi-gas/electric meter on my bedroom wall. As things go to avoid, it’s lower on my list. I honestly haven’t looked into the safety, it’s just my gut feeling–trying to get back to the way we evolved to do things. I actually question whether charring meat is really dangerous. Seems to me we should’ve evolved to deal with that by now!

I had an induction range in my old house. Even though we treated it quite gently, it still has lots of scratches on the cook top. Be sure to factor that into your repair budget. They are also slightly more expensive than electric.

Do you as landlord prefer your tenants to cook more? Or less? There are pros and cons to both.

Pros: It’s usually women who cook more. (Sorry for stereotyping) And I’d rather have mature women than a bunch of frat dudes in my house.

Cons: More usage just means more wear and tear. So when tenants move out landlords may have a lot of work to do on the kitchens.

If you like tenants who cook more, make the kitchen friendly to cooks. If not, do the opposite…

Did I just cross the line to evil landlord?

Do you as landlord prefer your tenants to cook more? Or less? There are pros and cons to both.

If I had to pick one, obviously as a landlord, I would say less. Less wear and tear.

The qualification would be though that it would depend a lot on what type of housing one is offering for rent. Obviously if it is a full blown SFH, I expect families to be cooking up a storm (male or female chefs please apply) and I would offer the full complement of appliances as expected. Typically more rent too and so more amenities necessary to justify that rent level. Fair enough.

But, let’s say we are talking small studios or secondary inlaw units where technically stoves are illegal and/or your target renter is a young person who doesn’t cook much. Or, at least, that is what is being presented to the marketplace and you let the prospective renter(s) decide for themselves if that works for them or not. Then, what should your strategy be? Let’s be honest, inlaw units are not going away any time soon and if anything laws are being relaxed to make them fully legal as residences so how to best address the issue of providing safe cooking appliances then? Yes, obviously hot plate usage is a def no-no. We want to provide a fully safe living environment with properly coded wiring/venting/circuit breakers/smoke detection. I, myself, understand that gas is probably the preferred way of cooking but I am concerned about open flames to be quite honest when it comes to renters who don’t have the same skin in the game as I do. If induction costs comes down enough and it is more safer than any of the other two ways it may be worth offering it in the future.

I agree that your best bet is to offer a full kitchenette so that you have control over the safety. If you don’t offer it, they may bring it in.

I also don’t think anyone expects a gas stove in an inlaw unit AND honestly, it may be a no-no if it’s a studio for same reason you can’t have a water heater in a bedroom.

They allow gas wall heaters in bedrooms. …and fireplaces…why not a gas stove in a studio…have one in Tahoe…

Yes, not a problem in a legal studio but I was wondering if induction might be safer than electric or gas. You know how renters are…

They allow gas wall heaters in bedrooms. …and fireplaces…why not a gas stove in a studio…have one in Tahoe…

Seriously??? Then why not the water heaters?