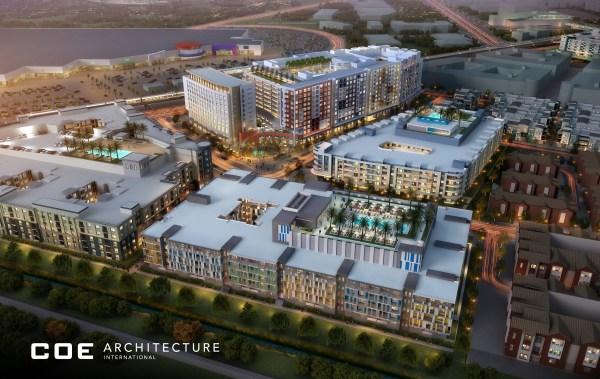 A transit village with apartments, retailers, restaurants and a hotel is rising in Milpitas next to The Great Mall, close to light rail and the under-construction BART station. It’s one of se… 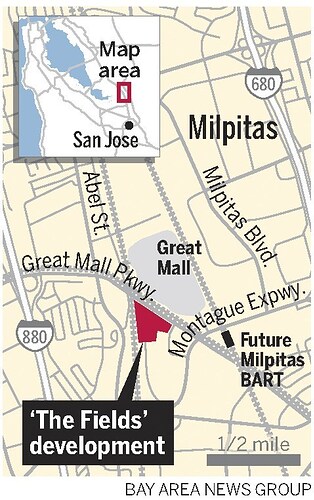 MILPITAS — A transit village has begun to rise next to The Great Mall in Milpitas, bringing apartments, an organic grocery store, a hotel and high-end stores and restaurants.

The development, known as The Fields, will offer residents nearby links to mass transit and will incorporate amenities including upscale athletic centers.

The Fields complex is under construction, and its builders hope to capitalize on an existing nearby Santa Clara Valley Transit Authority light rail stop and the under-construction Milpitas BART station, which will operate at the corner of Montague Expressway and East Capitol Avenue.

“We really believe the future of single- and multi-family residential will be connected to these transportation nodes,” said Kyle Suryan, director of investments with Newport Beach-based Lyon Living, the project’s developer.

This new Milpitas project will include 1,185 apartment rentals to be built in four phases, 150,000 square feet of high-end retail and a 200-room Virgin Hotel.

“The apartments will be for families, tech workers, for millennials, for people now in Milpitas who want a place to live, young professionals,” Suryan said Friday.

The Milpitas market is going to be flooded with new rentals. Need to reconsider my idea of buying in Milpitas…

Are you buying condos to rent? I don’t think it’d impact the SFH home rental market much. We are done building SFH on good size lots. The appreciation on those will continue to be highest, because supply is fixed. This opens up Milpitas to people that want to commute to SF.

Thinking of buying SFH’s. I have long liked Milpitas, now even more with BART and the built out in North San Jose.

Berryessa part of San Jose has upside too. BART opens soon there too.

The moment BART is planned, all the lands are bought by big builders for SFHs and THs. Both Milpitas and Berryessa places are packed and priced further. I really do not see any homes with deals. Even if there is some priced low, heavy competition is there.

Take for example, this Sunnyvale home is not even once on open house, but competition is high as the LP is low (fixer) https://www.redfin.com/CA/Sunnyvale/914-Coachella-Ave-94085/home/1542577

The good sign is rate hike coming now. Once rate hiked and all stocks are down, there are chances of less competition to buy when stocks are at low ebb.

and also Milpitas landfill is not closing now. 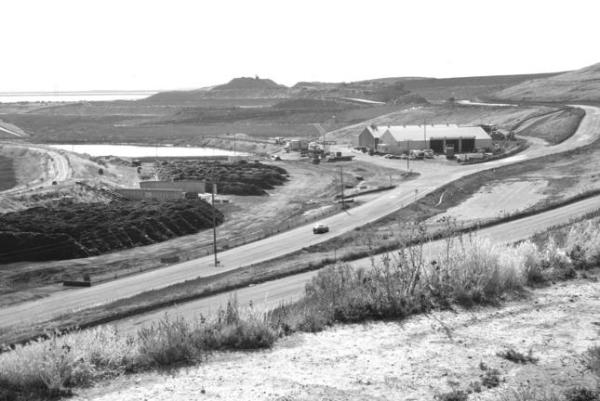 The good sign is rate hike coming now. Once rate hiked and all stocks are down, there are chances of less competition to buy when stocks are at low ebb.

Is better to err on missing a buying opportunity than stuck with an underwater asset. So sit and wait.