Most Expensive Public School in SF 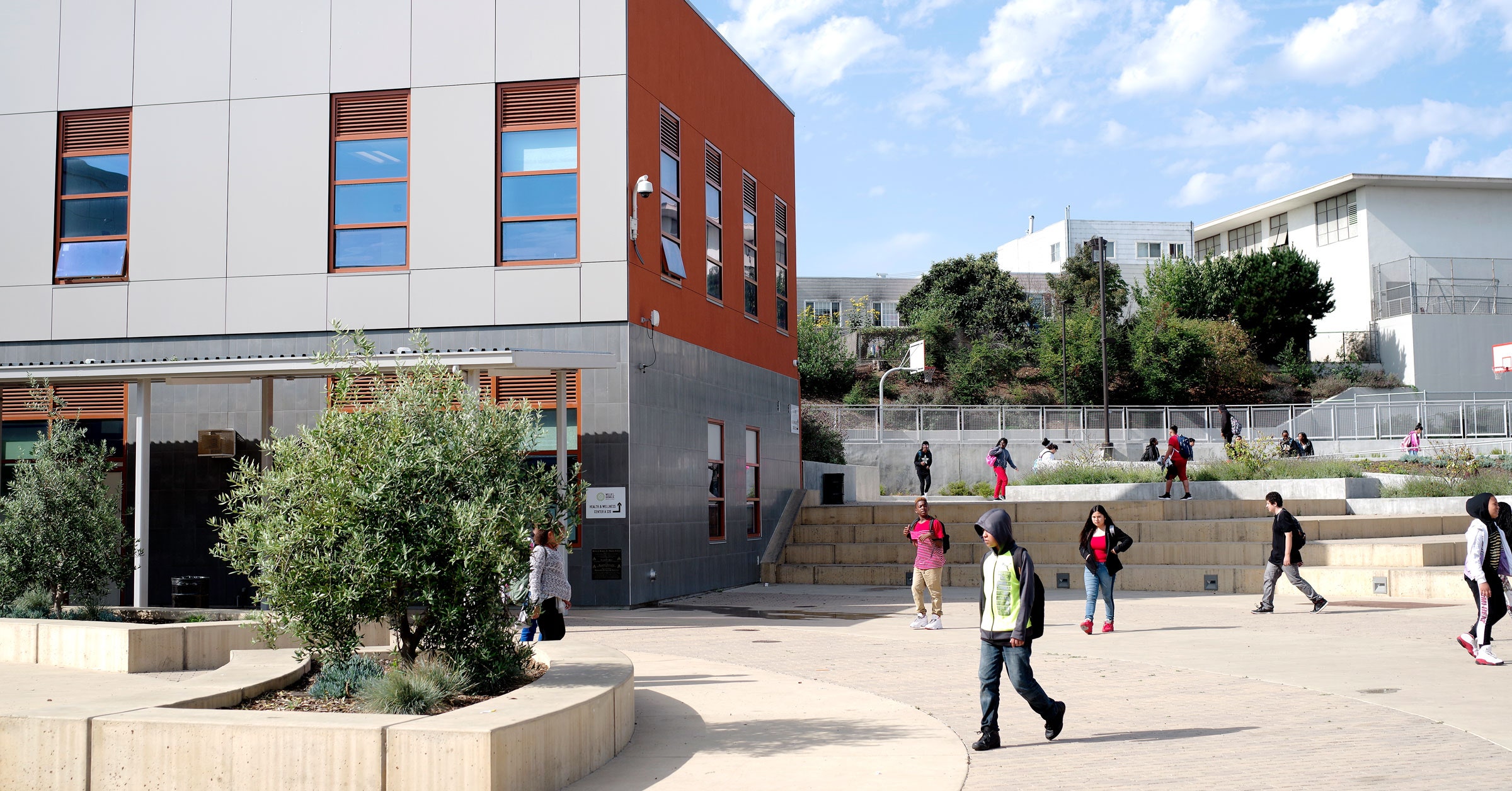 How the Startup Mentality Failed Kids in San Francisco

Huge contributions from tech titans, a STEM-packed curriculum, gadgets everywhere: Willie Brown Middle School was supposed to set the bar. Then it opened.

Willie Brown Middle School was the most expensive new public school in San Francisco history. It cost $54 million to build and equip, and opened less than two years earlier. It was located less than a mile from my house, in the city’s Bayview district, where a lot of the city’s public housing sits and 20 percent of residents live below the federal poverty level. This new school was to be focused on science, technology, engineering, and math—STEM, for short. There were laboratories for robotics and digital media, Apple TVs for every classroom, and Google Chromebooks for students. A “cafetorium” offered sweeping views of the San Francisco Bay, flatscreen menu displays, and free breakfast and lunch. An on-campus wellness center was to provide free dentistry, optometry, and medical care to all students. Publicity materials promised that “every student will begin the sixth grade enrolled in a STEM lab that will teach him or her coding, robotics, graphic/website design, and foundations of mechanical engineering.” The district had created a rigorous new curriculum around what it called “design thinking” and a “one-to-one tech model,” with 80-minute class periods that would allow for immersion in complex subjects.

Are you planning to send your daughters there? It’s in your hood.

Good stuff. Obviously, an ambitious but poor start, but hey no pain no gain I say. It certainly didn’t help that the officials and early leadership was just not up to snuff to handle what is a monumental task. And just a nod to my favorite city, at least it is trying, even in the face of declining enrollments as a whole in public schools (vs private).

It is no different from opening a brand new restaurant. If you start off poorly, the negative reviews through Yelp or word of mouth will almost surely start a death spiral as people are reluctant to give your place a try. So, what do you do? Get to work and just try your best to turn it around. Obviously your kids schooling is nowhere near a bad one time dinner…

It seems like it really boils down to keeping or getting good teachers to stay at a school, new or old. I say the Fab 7x7 should implement housing credits or cheap loans for teachers who are willing to live in the city and thus are probably more accessible and dedicated to ultimately the most important person in the room: the students.

I don’t get the headline. It doesn’t make any sense compared to the article. It seems the first principal was either incompetent, lazy, or both. He failed to prepare for the first school year.

The author is racist. He’s blaming the students and parents in the poor neighborhood

In 1978, California voters passed the state’s most infamous law: Proposition 13 severely restricted raising property taxes, and required a two-thirds majority to pass many tax measures. This gutted California’s education funding so severely that the state’s public schools, which had been ranked best in the nation in the 1950s, fell to among the worst in a few decades. (They now hover around 35th.) California currently spends less per student on public education than many low-tax states. Belying its progressive image, San Francisco spends roughly half the amount per public school student than New York City, where the cost of living is comparable.

Is a death spiral. Is getting worse. Need to repeal prop 13.

Proposition 13 takes a measure of blame for low teacher salaries, but San Francisco also allocates a curiously small percentage of its education budget to teacher salaries and other instructional expenses—43 percent, compared with 61 percent statewide, according to the Education Data Partnership. Gentle Blythe, chief communications officer for the SFUSD, points out that San Francisco is both a city and a county, and it is therefore burdened with administrative functions typically performed by county education departments. Blythe also says that well-­intentioned reforms such as smaller class sizes and smaller schools spread the budget among more teachers and maintenance workers. It is also true, however, that the district’s central-office salaries are among the state’s highest, as they should be given the cost of living in San Francisco. The superintendent makes $310,000 a year; the chief communications officer, about $154,000, according to the database Transparent California.

Does not matter want they pay teachers. If the parents and the students don’t value the education they get for free then there is no point. The sixties radicals convinced Latinos and Blacks that Caucasians were teaching their kids honky crap. Now after 3 generations these minority groups don’t value education at all. Racism in reverse. That has been institutionalized. Black studies, Latino studies and the whole lefty movement have pushed a huge part of society to not value education at all.

Also, California state law mandates aeach school has all of those admin positions. They blame prop 13, but the real cause is too many high paid admins. We’ve seen the data that since prop 13 passed property tax revenue has grown more than income tax revenue. Go to city details and you see revenue growing 5%+ a year. There’s not a revenue problem. There’s a spending problem. California voters are naive and fall for the lie.

Plus doesn’t half of educational spending go to bureaucrats in Sacramento? (I remember reading that, but I don’t know if it’s actually true.)

“Salesforce.org, the philanthropic arm of Marc Benioff’s company Salesforce, has given nearly $35 million to Bay Area public schools in the past five years alone; each year the organization also gives $100,000 to every middle school principal in San Francisco and Oakland.1”

Wow. Guess it pays to be a middle school principal in SF. Don’t bother with extra housing.

School voucher is a good idea. But it’s too republican so people are too scared to talk about it in California.

Charter school is another good idea, but it’s attacked in ads by the union.

Democrats are completley against vouchers. It’ll never happen in CA.

I am pretty uneducated in this. Why are democrats against this?

Why are democrats against Charter schools?

I am pretty uneducated in this. Why are democrats against this?

Because they want your kids in a public school to indoctrinate them. Vouchers would be usable at a religious school, and that also tends to bug people because they feel that their taxes are paying for religious instruction. Of course, religious people are paying taxes for atheist instruction, but they don’t see that as being the flip side of the coin, but as expected.

I think it could’ve worked out, but I agree that vouchers would be a better solution. I believe that parents should have the best options open to them for their kids, and public/charter schools only cuts out a lot of options.

Actually they’re required to do that anyways.