Need to redo sidewalk, what would you ask?

Hi, so our sidewalk adjacent to the house is tilted towards the house. Came up in the inspection, and as predicted, the water is accumulating next to the wall/foundation.

I’m assuming that I need to get someone in to rip out the old sidewalk and redo it. One thing to note is that it’s already come up that the sidewalk is very high compared to the foundation–almost to the bottom of the air-openings, so i don’t think putting another layer over is a good idea. (for one opening, we’ve got 1/2" between the sidewalk). This is a concrete perimeter, stucco wall.

How would you go about finding a contractor?

What would you ask?

What should I ask about how they are going to protect the stucco on the wall?

Anything else that I should ask?

bump… anyone have thoughts?

I actually have had good success with just responding to Craigslist ads. Not with concrete work but other types of jobs. You might give that a try as a start.

The stucco wall should be completely separated from your sidewalk. They may look connected but they should not be actually connected.

On the topic of sidewalk, I recently looked at an open house in Oakland. There is a new sidewalk ordinance in Oakland that owner is responsible for sidewalk maintenance in front of their properties. Just like PSL (private sewer lateral), they require sidewalk compliance at the time of sale. You would think it’s no biggie given how small standard Oakland lots are, but this hits corner lots dis-proportionally hard. This open house I went to happens to be a corner lot, and agent said owner got estimate of a compliance job to be roughly $6k. That’s even more than a typical PSL job of $5k.

And the way they do it in Oakland is just inefficient. For my SF house, the city hires contractors to come in and repave/replace entire blocks of sidewalk, then bill each property owner for each portion. The bill I got was around $600 for my 25-ft frontage (but not the entire section is replaced). This method probably won’t work in Oakland as a lot of owners will just not pay, so sidewalk jobs are done in piecemeal in Oakland. My guess is the cost will be at least twice as much for such small concrete jobs. But then, the city is run on the basis of human compassion so it’ll all work out.

Is this coming out of your own pocket? As pointed out, concrete work is expensive, so if you are able to use another method to divert the water away from your house, it might save some money. A French drain and sump pump, or possibly a curb or gutter type of drain added to the side of the walkway further away from the house? It seems that the problem will worsen over time as the ground erodes and increases the slope. I don’t have experience with this because there are setbacks, but maybe if you post a photo others will have better ideas.

Yes–our own pocket. It’s not a street sidewalk.

I was trying to figure out how to lay tubing with water sensors operating a pump along the wall, but it wasn’t the easiest thing to piece together, and my husband feels like we should just fix it right… Why they stuck it in like this in the first place, I don’t know. Clearly it was not done right. (and there’s no evidence that it was originally right and eroded. Only one crack, and it’s toward the house, not length of sidewalk) 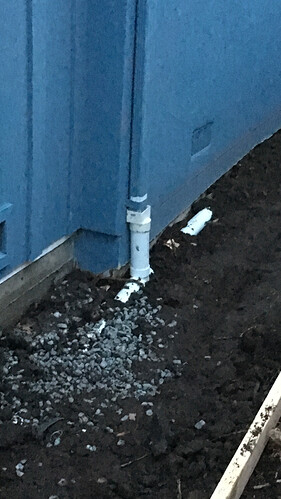 How much will it cost you?

How much will it cost

I don’t know. Its not my house.
This old house had huge makeover with addition of 1 room (as you can see on pic - left part of foundation is new and walls are different ).
The house in RWC but everything done by contractors from East Bay