I think this can be a new trend…

New York University said Thursday that it will cover tuition for all its medical students regardless of their financial situation, a first among the nation’s major medical schools and an attempt to expand career options for graduates who won’t be saddled with six-figure debt.

School officials worry that rising tuition and soaring loan balances are pushing new doctors into high-paying fields and contributing to a shortage of researchers and primary care physicians. Medical schools nationwide have been conducting aggressive fundraising campaigns to compete for top prospects, alleviate the debt burden and give graduates more career choices.

NYU raised more than $450 million of the roughly $600 million it estimates it will need to fund the tuition package in perpetuity, including $100 million from Home Depot founder Kenneth Langone and his wife, Elaine. The school will provide full-tuition scholarships for 93 first-year students—another nine are already covered through M.D./PhD programs—as well as 350 students already partway through the M.D.-only degree program.

Maybe @sfdragonboy can do something similar?

UCLA boasts on its website that students have turned down offers from the University of California, San Francisco, Harvard University and Stanford University to attend its medical school, thanks to merit scholarships covering all costs for up to 20% of students. Those are funded by a $100 million gift made in 2012 by entertainment mogul David Geffen.

So if college is free, then they’ll choose to do something low paying with their medical degree? They could just take a low paying job without going to med school. I think it’s silly to think that they’ll change what they want to do after med school.

They cited some stats saying doctors in pediatrics make much less than doctors doing brain surgery for example. Or doctors in rural areas are paid less than in big cities. Their idea is that if students don’t have huge debt on their back they are less likely to be movotated by money alone.

But even the lowest paid in their chart below still makes high 6 figures. Is it some sort of reverse Robinhood to bankroll these students?

Not a lot of people are going into primary care (internal medicine) as salaries in primary care are around $200k in a big city (iirc). You basically are screwed trying to service a $150k - $400k student loan and start a life that much in debt. So people opt for specialties that can get you to $400k-$500k/yr after fellowship. This is a good thing if it will boost people to be more option on the path they take 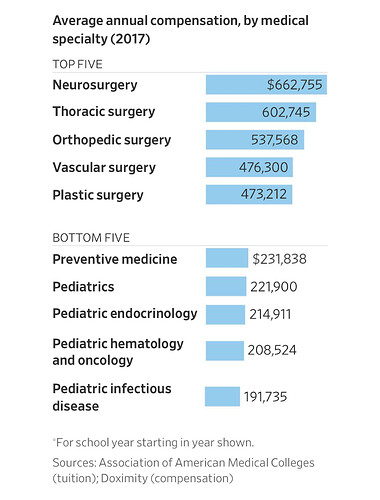 So if college is free, then they’ll choose to do something low paying with their medical degree? They could just take a low paying job without going to med school. I think it’s silly to think that they’ll change what they want to do after med school.

Presumably these scholarships come with terms that ensure they go to the right specialties. I don’t think you can graduate with one specialty and end up doing something else, so it’s probably easy to control.

Like you’re not going to graduate as a pediatrician and start doing brain surgery.

I’m laughing a little bit at the Pediatric infectious disease. Just the vision of your job to get sneezed on by snotty toddlers…

New grad from Waterloo who got job offer at FB can probably beat the doctor in the bottom list. And senior manager can probably beats Neuro surgeon. But the difference is those doctors probably get paid similar in say Austin TX or Sacramento so their cost of living could be much lower.

Speciality is determined by residency then fellowship if you really want to specialize. They all have the same MD.

It a game for fame, ranking.

A real help is to double class size, train more doctors and lower the school ranking

Again, my brother-inlaw (general surgeon) had a huge loan balance. Killed it off (no pun intended) after a few years of work. Just get in…

Again, my brother-inlaw (general surgeon) had a huge loan balance. Killed it off (no pun intended) after a few years of work. Just get in…

Surgery is usually 3 year residency and a 2-4 year fellowship after it. Granted, they start making good money after residency. Then after the fellowship they make insane money.

How come pediatric infectious disease makes less than pediatric? From time to time my kids were seen by pediatrician with infectious disease specialty by accident (we go to pamf and doctors share practice there. So, i usually choose whoever available earliest and sometimes made appointment with doctors with such specialty without knowing it) and they charged extra due to their specialty. How can they make less money than pediatricians without specialty?

Maybe they don’t have much patients and work less hours?

Maybe they don’t have much patients and work less hours?

Pretty odd. If you can take the name at face value, their waiting rooms should be full. Kids are sick all the time. Like all the time. Especially after they start preschool and other parents just don’t bother keeping their sick ones home.