One Out of Every 20 Americans Is Now a Millionaire

Source: One Out of Every 20 Americans Is Now a Millionaire

Who are you going to give credit/blame for the record number on food stamps?

That credit/blame also goes to him ! No government can cater all, either upper or lower income. But, bringing back the economy is a major change.

Same is the case for Trump. When he wants to cut taxes for corp, he charges additional tax from people. Companies, revenue generating machines, can move out the head quarters if tax cut is not there, but it is hard for people to move out unless they relinquish citizenship. Trump is thinking if companies get tax cut, they will bring back money to USA and invest in growth.

Wait, wait…a Trump supporter will be back to give us mumble jumble…just wait…

The mumble jumbling is coming!

Like when he said how a small group could control the government ( the NRA) ?

Honestly, I really wanted to vote for Johnson. He was woefully unprepared when interviewed. It’s long-time we ended the two-party stranglehold on this country. I can’t imagine a scenario where I’d vote for Hillary though.

Honestly, I really wanted to vote for Johnson. He was woefully unprepared when interviewed.

and… Donald Trump was prepared for his interviews???

(before and after his election)

It’s long-time we ended the two-party stranglehold on this country. I can’t imagine a scenario where I’d vote for Hillary though.

Now, I confirmed my suspicions, there was some naivety behind all that megalomaniac attack against democrats. Believing in a totally unprepared person was for uneducated people. Really!

Almost every Singaporean is a millionaire

Not true according to this article. Only 1 in 35 in Singapore is millionaire.

Maybe Singapore should learn from the USA instead. 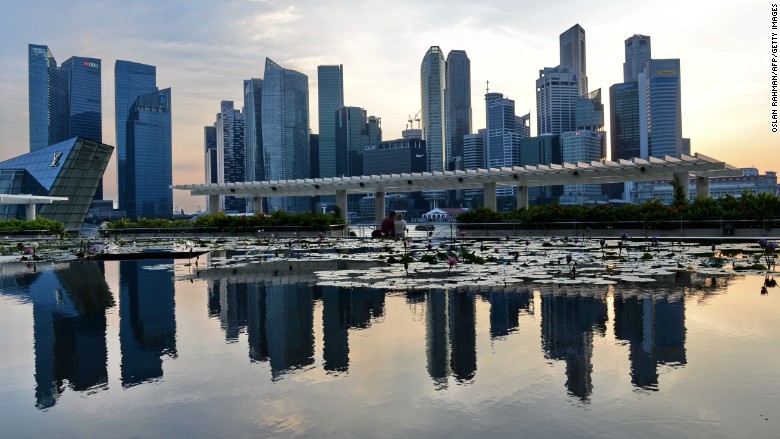 Singapore is expected to add millionaires at a faster rate than Hong Kong over the next five years, according to a new report.

I am just about to become a millionaire. My home is above the $700K right not.

I just need another 10 people to convince with my fraudulent activities and I will make it to the top.

Honestly, I don’t think I’ve ever been excited about my choices in presidential candidates. Overall, I think the government and specifically bigger government is our most pressing issue. Both parties want big government in their own way. That’s why spending goes up and up and up as they switch power back and forth. Trump increased the Pentagon’s budget when their own report shows they waste $125B/yr. Why on earth are we not cutting their budget by that $125B/yr?

I’m far more worried about social program spending than military spending. One has been significantly increasing as a percent of GDP while the other has actually declined over the last 60 years. By 2032, the big 3 entitlements and interest on debt will consume every dollar of tax revenue. That’s not even close to a sustainable path and no one wants to address it. Restructuring the tax system to pay for it would crash the economy and get everyone voted out of office. Restructuring the programs to be sustainable would anger so many people that everyone would be voted out of office. The end result is we do nothing and remain on a collision course with economic disaster.

If I got my tax plan, I’d exempt income below the poverty line and tax everything else at a flat rate (all types of income). There’d be zero deductions, and taxes would take a few minutes to do. I’d tax corporations on their US revenue not profits and get rid of all the deduction and credit BS. The system would be incredibly simple and treat everyone by the same rules. Lobbyists would never let that happen which is why we’re getting terrible proposals for tax reform.

Then entitlements need serious reform. Over 90% will receive more from social security and medicare than they paid into the system. That only works if you have a work force that’s growing fast enough to sustain it. We don’t anymore. Something has to give there.

The most useful thing was the Simpson Bowles commission, since they were all retiring. Both parties looked at the recommendations and immediately rejected them, since it was full of things that’d anger the base of both parties.

My guess is we’ll get through the next recession although the federal reserve won’t have room to cut rates as much as prior recessions. It will spike debt levels even more, since entitlements are increasing every year. It’ll be the recession after that one that could be make or break for the US. It’ll be much closer to when entitlements and debt are consuming every dollar of tax revenue. Entitlements will still be increasing, and the debt load will grow to crushing levels.

Not true according to this article. Only 1 in 35 in Singapore is millionaire.

First that is 2015, not 2017.
2nd I meant S$1M not US$1M.
3rd I meant includes owner-occupied HDB + CPF, standard definition is less owner-occupied. CPF is not publicly known, and is not included as computation of wealth.
4th Don’t be offended, just see who would verify remarks.

S1M is almost the same as US1M. CPF is retirement account, right? Do they count American pension and 401k accounts?

My point is that US is still a very rich country, with a lot of rich people. We are doing pretty well here.

Among forum members, 90% are millionaires I think.

GDP per cap for US is $57k whereas for Singapore is $52k. No need to argue which is better they are very close. However, America is better hands down when it comes to weather, space, and freedom

But the question is are there any billionaires in the houses???

But the question is are there any billionaires in the houses???

I am working on it. I am sure you are too.

Um… sure but don’t work too hard…

However, America is better hands down when it comes to weather, space, and freedom

S1M is almost the same as US1M.

Current exchange rate is US$1 for S$1.3562. Thought you would be careful with “facts”. If you want to catch me, I can catch you too

OK. I thought it was closer than that. Maybe USD has strengthened more than I thought.

America is so rich we import our poor people. Singapore is the same… Hard to get millionaires to do all the service work

It’s more comfortable being rich in Hong Kong and Singapore. Even poor people have maids doing all the chores. Whereas in America even Jeff Bezos washes his own dishes.