Uncle Manch, Let's Buy This One

I believe you are a landlord for the longest, 20-30 years right? Could you give us a short history of property price vs rent for the past 20-30 years?

Thought was smart to ask a generic question expecting a good answer but I’m wrong. Let me try again.

Specifically, is there a period where rising property price but rent is stagnant or declining?

that actually did happen during the “boom” (or call it “bubble” – your preference) between 2002 and 2005.
Everyone suddenly wanted to buy and there was less demand for rentals, esp apartments. This caused prices to go up further and rents to drop.

I’m not quite sure that this was true in Santa Clara County, but I have witnessed it in Santa Cruz and in Las Vegas.

And while we’re at it, I think I lost 4 tenants this year because they decided to buy. Just got notice #4 two weeks ago. Obviously, one loses the financially most stable and responsible tenants that way. The most desirable tenants. Let’s not speak about the others

Rents have not come down yet but they did not rise another 10% either.

The problem with A properties is that you lose tenants that become buyers. I own mainly C properties… My tenants rarely buy… Although some end up in jail… lol

I feel that rent control distorts the figures some. Rents are not able to move freely in the marketplace, and yes that impacts property pricing to a certain extent. The problem though is that I believe in today’s marketplace where the inventory is really low, buyers are not as focused on the past/current rent history of a place (in terms of projecting expenses, etc) vs what they think they can achieve or get in terms of rent (however they can do it, legally or illegally) once under their window. I see realtors EMPHASIZING that current rents are low (as if one can magically raise them, even in a rent control environment). My point for referencing Oakland is to convey the idea that my experience in the shallow end of the market does not at all relate to perhaps what you cats would experience in SV at all. Different markets, different results. Capiche?

Asking the question another way, at the peak of property price e.g. in 2007, is the trend for rent, increasing or decreasing?

I can offer my 1 person experience on that question. I rented from 2003 - 2009 in the city of Daly City. Before the bubble bursted, prices were blooming while the rent was stagnant. I feel that landlord tried to raise rent but the demand was not there probably due to many tenants got loans so easily and bought. After the price peaked at 2007, the rent was also stagnant as the reverse was true that demands increased probably due to many people need to rent after foreclosure. In 2009, I tried negotiating with my landlord for a lower rent but failed. I ended up bought the property from him at the time

…there is a cap with rent increases for existing tenants.

Do you mean absolute rent stays the same or rent increase in % can’t be higher than the property price increase in %?

I feel that rent control distorts the figures some.

Your investment properties are all rent controlled?

Mostly (SF and Oakland). My Fremont SFH is the one exception. Time to raise the rent!!!

I mean the latter, when house prices went up 15% y-o-y, I increased rent by around 6%, it felt reasonable to me. If I were to rent to a new tenant, it would be more in line with market rates

My Fremont SFH is the one exception

Did you own it longer than 12 years? If yes, did you keep your rent steady approaching 2007 or increases your rent gradually? What did you do wrt rent, from 2007 to 2012?

No, this is the place that fell onto my lap in December 2014 at a steal. A remodeled 3/1 SFH in Fremont for under 500K. I have since kept the rent the same to a nice family. Dirt cheap (2200). My Big Bro thinks I am too generous. It may be time to raise it.

It may be time to raise it.

If you do it, tell us what is the tenant’s response

My Sac apartment rents have been flat for a long time… Rents now going up… But too many other factors to determine value… The big one is cap rates… Thanks to BA money feverishly looking for returns Sac caps are now 4%… So my 6 cap building is worth 50% more to a BA buyer…
point is there is no direct correlation between rents and sales prices…
Personally I think California buyers like Hanera are willing to pay more than Texans for Austin real estate because they will tolerate lower caps.
I was guilty of the same in Tahoe… When I started buying a 5 cap was fine with me… But locals would not pay more than a 6 cap… now all my properties are 6 - 11 caps and buyers will pay a 4 cap…

Well, that’s the rub. I did do a roof repair this year there and that was fairly expensive. The fact is, I have too many things going on with the Oakland place and me maybe buying something in exchange and then the wife leaving in December for home. Let’s put it this way, if for some crazy reason I decide to hold onto the Oakland place and really start being motivated to raise rents like a madman the Fremont family better watch out. I am anxiously waiting to see how a complete remodel turns out down the street. The developer really thinks my area is going to pop once his project is done along with the neighbor on the other side. If so, I may just effectively “evict” them by raising it a lot so that they would feel inclined to move. I would then do the remodel and make the home killer to either resell or just up the rent. I still find it funny, that so many people passed on this inside deal at the time. Where else can one find a Fremont remodeled SFH for under 500K? Nowhere!!!

Although some end up in jail

Just curious. In these cases, what happens to the lease? Can you break the lease and rent it to somebody else? 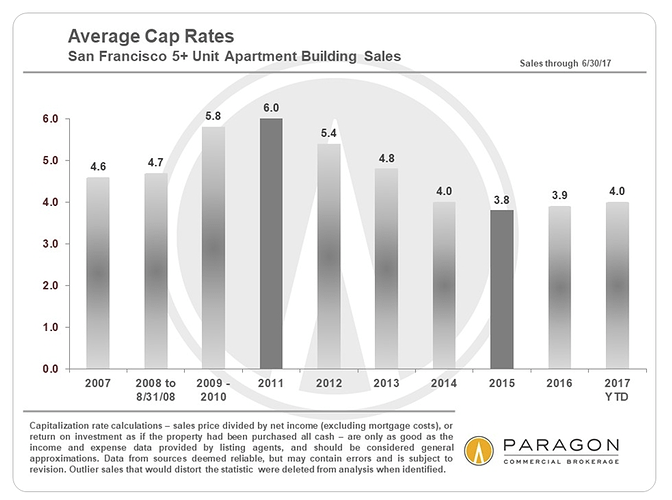 Gradually increasing cap rate from 2015 means? Investors are paying less for rental? Do Paragon has data earlier to say, 2004? 2007 to 2008 show gradual increase in cap rate so need to know cap rate from 2004 to 2007, is it increasing or decreasing?

Paragon’s chart is for 5+ apartment only. The recent multi-family listings I saw seem to be stagnating and lowering asking price. So price has been softening at least in the Bay Area. I think people are moving out of apartments and buying their own homes, because millennials are making babies (finally).

I’d expect the SFH and condo cap rate to show the opposite trend.