Quora: What are pros and cons of buying a house with a pool?

- Private pool times and no restrictions . If you want to drink your lemonade while you relax on an inner tube, no one is going to stop you! If you want a midnight swim, go for it.

- It is refreshing in early summer. Those first hot days are awful, and it is nice to just be able to go out there and jump into the pool.

- You make pool safety a priority for your kids, including teaching them how to swim.

- Safety has to be a priority. We put chimes on the doors and installed a $7K pool cover to keep our kids safe. It was worth it, but it would have been $7K we could have spent on a different house. You cannot skimp on this. My SIL moved into a house with an above-ground pool and left the safety gate on the ladder unlatched during a vacation. Had a neighborhood kid drowned on her property, she would be liable and risk for a lawsuit.

- The costs are just too much. Everyone thinks it’s the water bills that go up, but it’s actually the electricity bills. When you add up the bills plus chemical costs plus maintenance plus opening/closing costs, it adds up fast. I mean, we actually moved into a house without a pool that is significantly larger and newer. Even with a bigger mortgage payment, if you divide how much we spent on that pool annually and added it to our previous mortgage payment, the new house is still more affordable.

- Things will break, and it will cost major $$$$ . We went through so many pumps, and no one would explain us why. It was a new pump ($800) every other year or so! If it wasn’t the pump, it was the filter. Of course, then there was the Christmas morning when we looked out and the cover was concave. All of the water had drained out, and a new liner was needed that spring.

- Your relationships change. We didn’t buy a house with a pool to show off, but it still hurt relationships. Heck, within the first few months of us moving into the house, someone poured gasoline into our AC. The police and fire crew suspected it was jealousy over the pool. We invited my FIL to swim at our house “any time” since he was usually off work by 2 PM, but he took this to mean “let’s have a pool party when they aren’t home!” They had a pool party without us AND broke our pool cover (which they refused to pay for). Everyone always begged to come over to swim, which isn’t a problem until you just want family time.

- Think about how often you’ll actually use it. I live in Kansas, so we would have it opened in April or early May. If we weren’t lucky getting it scheduled, it wouldn’t be opened until after Memorial Day! If it warmed up quickly, we would be in there until mid- to late-June. By then it’s usually been in the upper-90s for at least a week, and the water temp was somewhere north 89 degrees. By the time July hit, it was just too hot to be in the pool. It would say obscenely warm until late September, at which point the pool would only be used on weekends. When we broke it down, we were spending a lot of money for just 2-3 months of swimming. It was cheaper to get a pool membership and share the pool.

- There’s so much risk if you screw up your chemicals. My dad experienced this - he had a home kit that gave him the wrong results every single time. For a few weeks, he put in the wrong chemicals thinking it would fix the problem. He lived in a rural area, so it wasn’t easy to get it tested by a pool company. When he finally did, the tests showed different results and he actually destroyed the liner in the process. Basically, there’s a lot of room to goof up and the cost is huge.

- Speaking of which, your pool isn’t necessarily cleaner than a public pool. If you don’t maintain it or hire someone to maintain it, it can be even more disgusting than the public pool. In a public pool they can require certain things - swim diapers only or showers required - but most homeowners don’t mandate that.

- Your pool isn’t necessarily safer. I would like to think most pool owners have equipment to pull out swimmers in emergency situations, but it’s not the case. Too many homeowners are too lax in this.

- You can’t just take it out. If you get tired of an above ground pool, you can manage to take it out easily. If you get tired of an inground pool, you’re basically screwed. It costs thousands to remove it, not mention the cost to backfill it. When we priced our pool to be filled in, it was $6,000. We opted to just replace the liner and sell the thing.

- Speaking of selling it, pools aren’t attractive to buyer s. In our area, houses were selling within 48 hours. Our house took 6 days to sell. Buyers would come into the house and hate the pool. It was really a killer for most of them, despite it being front and center in our listing photos. We had to find the right buyer, and that took a lot of time. I can’t imagine selling it during a down year.

Basically, if you can’t tell, I’m so happy to be done with home pools. I know some people love them, but at this point in my life, I am more than happy to pay the money to take my kids to the neighborhood pool that even has a life guard.

My Big Bro filled up his pool at his Saratoga home, and he was an avid swimmer…

For regular swimming you need bigger/longer pool than what is built in most of the houses.

I keep thinking about building just one lap lane along the house boundary to get some more distance to swim.

I keep thinking about building just one lap lane along the house boundary to get some more distance to swim.

Why spend so much when you can get the workout you want from this, a swim in place spa: 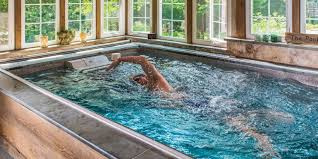 That’s just sad. Like a hamster running in a wheel and not going anywhere.

Uh, ever heard of treadmills? A lot of people use them, even though…

Here, before you insult any more people…