Rates and RE Prices

He makes some good points. Home prices tracked inflation until the early 70’s. Interest rates have been in a downward trend since then and have bottomed. The downward trend in rates won’t continue. He argues that means RE won’t appreciate as much in the future as it has in the past.

I think there are some other variables his thesis is ignoring like supply and demand. We have population growth (some areas are growing faster than others) increasing demand. Some areas freely create supply while other areas go out of their way to hinder new supply. If he’s right, it only makes sense to buy RE where there’s population growth and supply is restricted. Fly over states will be a terrible investment for appreciation going forward.

Kevin O'Leary: Unless you can pass this two-question test, don't buy a home

Whether to buy or rent is a "crucial decision," says investor Kevin O'Leary. Here's how to make it the right way.

Stocks aren’t safe in a rising interest rate environment. Kevin lived in Canada the 70s, doesn’t understand the BA. Real estate skyrocketed with rising rates.
If not stocks of RE, Where do you put your money? Gold or bitcoins … lol

Stocks aren’t safe in a rising interest rate environment. Kevin is too young to remember the 70s. Real estate skyrocketed with rising rates.
If not stocks of RE, Where do you put your money? Gold or bitcoins … lol

Well, let’s differentiate investment buying vs owning for personal consumption. When it comes to personal consumption there is a sense of pride and accomplishment that one can’t and shouldn’t really put a price tag on or can quantify it down to a pro/con chart. To literally own the roof over your head, so that no one can make you move as long as you pay the mortgage, is priceless.

Rising rate is not good or even bad for all the major asset classes except gold and Bitcoin.

When interest rate rises, bond will be bad, stocks won’t be good, RE also won’t be super good after deducting inflation. You can buy gold and even Bitcoin to preserve wealth, but your timing could be wrong and end up with worse results.

I think it’s best to own rentals with positive cash flow and a fixed rate mortgage. You can simply forget about the market. Your fixed rate mortgage is your weapon to attack the rising rate and potentially stagnating real price. Your nominal price can still go up with inflation.

I think it’s best to own rentals with positive cash flow and a fixed rate mortgage.

2-4 unit building fits the bill…not too big and hard to manage personally and not too small where positive cash flow may not be achievable.

RE prices will go up in the BA due to supply restrictions. Interest rates be damned. Only a recession will kill the golden goose.

If the 10 year treasury has started a decade long rising rate, we’ll be in big trouble. We are used to the falling rate for the last 35 years. If we are going to have a 35 years of rising rate from 1.5% to 15%, we may get a lot of shocks along the way.

But I suppose that Fed and other central banks will try their best to control inflation. So we may have a peak 10 year rate of 4% and then it stabilizes.

4% won’t hurt BA real estate. May have some effect on the Stock Market

Rent is too low from this point of view.

No need to do that; I achieved 5 cap or better with all my east bay investments. Even the Walnut Creek House i bought last year was 5 cap.

Do you include maintenance, management, reserve or vacancy ?

4% won’t hurt BA real estate. May have some effect on the Stock Market

Unless buyers are having more cash down, it is hard to meet 35% DTI qualification.

When stock gets affected, it affects local RE buyers cash reserve as BA is mainly depended on stock cash. Competition gets reduced and prices will come down.

Rent is directly proportional to inflation.
Effect of inflation on price of house is more complicated.

Reserves cover long term repairs like roofs…usually not included in cap calculations because they can be handled by appreciation. I figure management knocks off .5% if it is 5% a year

I thought the standard definition for,

Ok yes I think my overall cap rate should still be beyond 5% after those are taken into account. The only real big ticket item within the last 4 years was replacing a sewer lateral which cost me $15k (yes, someone ripped me off). Ok I’ll make a more precise calculation and report back.

Ok I’ll make a more precise calculation and report back.

I already have a spread sheet for computing cashflow… I think elt1 is not consistent with the definition of cap rates… if details, should be talking about accrued cashflow… Just replace the figures for your house… elt1 keeps talking about roof, remodeling of kitchen is more expensive unless he is using very cheap stuffs that must be replaced after 10 years… 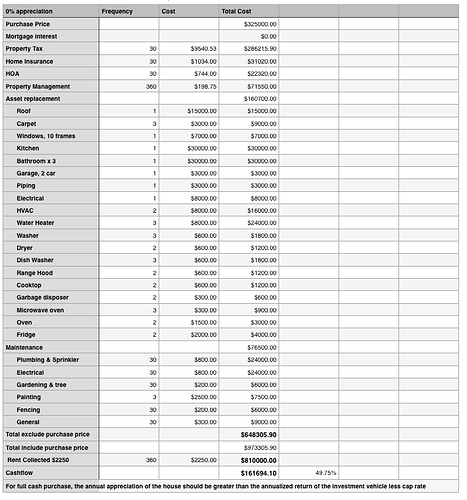