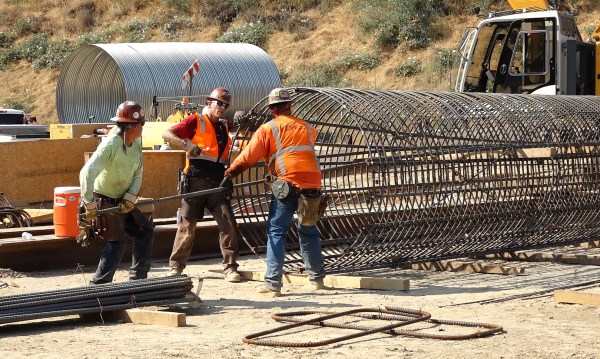 California’s Central Valley and Silicon Valley are less than three hours apart by car, but the small towns and vast stretches of farmland along the middle of the state are a world away from $3,000-…

Yes, A pipe dream and a cruel hoax…The Jerry Brown choo choo train was supposed to solve the Sf to LA travel problem…Now it is being touted as a commuter train…Who will pay $100 a day to commute to Fresno? Why not just build high rise housing in San Jose and PA? Instead of sending commuters 200 miles away at 220mph…Insane…

There’d be outrage over this too. Do you really think tech workers will live in Fresno? it’ll be retail and service workers. It won’t take long before people start complaining about the elite and their short commutes vs. the working class who can’t afford to live where they work. I think it’ll just accelerate the rent control movement.

I like the train. Just look at China’s example. Their experience shows it’s very effective to broaden a metro’s scope. It’d be very good for Central Valley too. Fresno may be too far? How about Stockton? Gilroy? Driving from Gilroy to downtown San Jose can easily take 1.5 hours one way in commute traffic.

We are starved for infrastructure as a country. We are very far away from building white elephants.

Caltrain already goes to Gilroy. What about making it faster? A major issue is our cities were designed for everyone to have a car. The massive parking lots everywhere kill the density.
They don’t lend themselves to public transit. Also, public transit in America is insanely expensive. You spend billions on a system that’ll lose money every year and require billions in upgrades in the future. How do you fund that? We need to dramatically re-think the whole transportation thing. Personally, I think buses make WAY more sense. A busy can replace 20+ cars on the road. The roads are already built, so you don’t have to spend billions in infrastructure to support it.

We already exceed capacity on freeways, and ran out of room to expand them. To rethink our transportation we need to start somewhere. I wish it can be done cheaper. But even at the current price tag economic impact is still positive. Part of HSR money goes to upgrade Caltrain. Electrification already started, and that brings faster train and more frequent service. I don’t think we can afford to theorize about the perfect solution. I’d settle for anything that improves the status quo.

That’s my point though. If you replace 20+ cars with 1 bus, then there’s much less traffic on the roads. If you do double-decker buses, then then you should be able to replace 50+ cars with a single bus.

How are you calculating it as economic positive? You’re talking about spending billions to lose millions a year. There’s no math that justifies that. If you do decide to lose millions more on public transportation, then what budgets will you cut to pay for it? Are you going to increase California’s already sky-high taxes?

Caltrain is 62K/day and BART is 430K/day. The bay area is 7M people and ~500K use BART or Caltrain. You want to spend billions on systems that 7% of people use. How high do you think ridership can get?

The value of any infrastructure hinges on how much economic activity it will bring. If you spend the money on broadening 101 you will get zero direct revenue from it. Looking at the revenue is not the right way to judge it. That’s why we need public sector to pay for it.

Silicon Valley desperately needs more space and more housing. In the perfect world we can build 5 stories high everywhere and problem solved. But we are not in that perfect world and never will be. Bringing Central Valley into the fold makes a lot of sense to me.

Also because our economic output per capita is so high, we only need a future Google or Facebook to be started here instead of in, say, Seattle. Our number 1 enemy is housing costs. Just one Google will pay for the whole HSR and more.

How much economic activity do you think it’ll create? To be break even, the taxes on the increase in activity would have to equal the cost. I don’t think there’s any chance of that happening.

Buses seem to be working well for the big tech companies. Imagine how much worse traffic would be without them. For traffic to get better, more cars need to be removed from the road. The fastest path is easily buses. Rail is 10+ years for even a relatively short expansion.

How much economic activity do you think it’ll create?

I don’t know. I am sure the HSR people had commissioned studies from some expensive consultants showing positive impact. It comes down to whether you believe them or not.

Anything having to do with long term future we always have to take a leap of faith. Current cost estimate is 64B. But that’s a statewide infrastructure and California GDP is 2.5T a year. We can afford it no problem. Even if that 64B went down the drain and we don’t get a single cent of benefit out of it, a highly unlikely scenario, it’s a small drop in our big bucket.

Americans have become cautious. We don’t dare to dream big anymore. I say take that leap of faith and invest bigly. Something will come out of it.

The state can’t even fund its pension liabilities. You want to spend $64B on a system that’ll lose money every year?

The state can fund its pension, just doesn’t have the balls to. I would rather fund infrastructure than pension. Infrastructure is building for the future, pension is a historic mistake from the past. Just spend every single dime on infrastructure and education and healthcare. Default on pension.

Losing money running the HSR is not a problem at all. We lose money on all our freeways. As long as the state economy benefits that’s fine. I would rather keep the HSR ticket price low and tax the economic activity it generates.

Repeal their pension first. Let Uber and its clones to solve the mass transportation. Mass transportation can be provided at much lower total cost with private firms. How about privatize Bart and Caltrain, similar to PGE?

How do you propose to fund the pension? You either have to cut spending or increase taxes to do it.

I prefer not to fund the pension and just let it fester. It will force the issue on voters what they want to do. There is no good solution, only less bad one. The best way is declare bankruptcy, which states can’t do unfortunately.

Build inner and intra city public transit first then HSR…thats how it was done in Europe. …Now they want us to believe than HSR will also be a commuter train…Are you fucking kidding me??? How are these commuters going to get to their jobs from the SJ station. …Totally bankrupt top down Stalinist planning encouraged by our own Putin in the governors office…Makes me puke…Why not just mandate high rises in Palo Alto…much cheaper and smarter state top down planning control

Why not just mandate high rises in Palo Alto…

What, and cast shadows in tranquil, fantasy land???

That is the whole point…PA has reaped the benefits of tech and is not contributing …In fact they and all the other peninsula cities have rejected highrises and HSR in their towns…They all want to able to go to LA at 220mph, but none want a 50’ high wall in their neighborhood. …put highrises along the transit corridor. …much smarter than sending workers home to Fresno…Why not an HSR to Tahoe, much nicer place to commute from.

I prefer not to fund the pension and just let it fester. It will force the issue on voters what they want to do. There is no good solution, only less bad one. The best way is declare bankruptcy, which states can’t do unfortunately.

I guess you’re OK screwing over middle class workers from what they were promised. Then you want to add HSR which will be built and run by union workers. That’ll just add to the pension funding issues. I want to pay the price of a Prius for a new Ferrari too.