Silicon Valley’s share of venture capital expected to drop below 20% for the...

Silicon Valley's share of venture capital in the U.S. will fall below 20% for the first time in history a PitchBook forecast reveals. 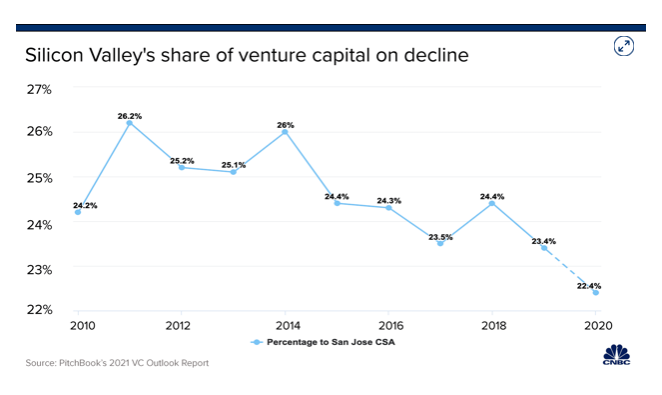 During every recession, this is common news “VC drops”. This means we are going to have a recession.

Venture Capital Down 50%. It’s Not Just the Recession, Folks. – TechCrunch

There’s a huge difference between what venture capitalists say and what they do. For much of the last decade some of the same partners that keep saying Silicon Valley will never decline as the startup epicenter of the world are spending every month...

VC revives after the recession !

Good, we have one more signal to monitor. From past experience is a leading indicator.

They are, after all, investors like us, also better than us, to find good companies and pump funds to gain big !

It is always common for reduction in VC funding as startups are not going to give VCs multi-millions or billions during recession period. Global venture capital funding in the first half of 2021 shattered records as more than $288 billion was invested worldwide, Crunchbase numbers show. That’s up by just under $110 billion compared to the previous half-year record that was just set in...

VC firms are investing a record amount of money. They are just shifting where it goes.

In the first half of this year, Bay Area startups collectively raised $54.5 billion, according to the report. At that pace, they’ll break the record total for a full-year — $66.4 billion, set in 2018 — in the middle of the current quarter.

Perhaps as impressively, it means that 36% of all venture dollars nationwide are going to San Francisco or Silicon Valley startups. That’s not far off the share the region garnered the last two years, even though the total amount raised by startups across the U.S. in the first half surged to $150 billion — already the second highest amount for a full-year.

Take San Francisco. Its startups attracted $25.2 billion in funding in the first half. That exceeds the totals posted by startups in 49 states. Only its home state of California — thanks largely to the Bay Area — attracted more venture funding.

Menlo Park, Mountain View and Palo Alto each attracted more venture funding than 47 states. Their totals were topped only by California; New York state, whose startups raised $20.9 billion; and Massachusetts, which brought in $17.4 billion.

Some in Texas and Florida have made a lot of noise about Bay Area tech companies and startups moving to their states. But San Francisco and those same three Silicon Valley cities each attracted more funding in the first half of this year than all of Texas, which has garnered about $4.2 billion. All of those Bay Area cities, plus San Jose and San Mateo, each took in more than Florida’s $1.5 billion in the first half.

Bay Area itself has expanded somewhat with hybrid remote work arrangements. I’d love to see data on Sac and maybe even the Reno area.

Fungible has completed a deal to greatly expand its headquarters office space in Santa Clara through a new lease. 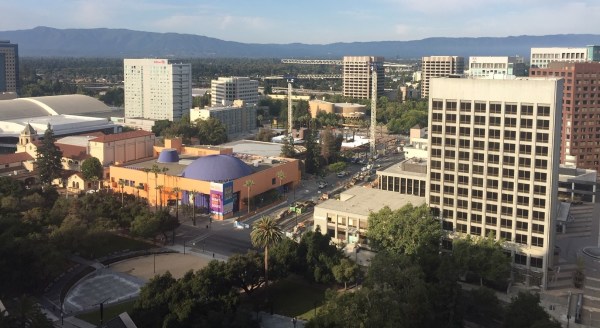 Silicon Valley’s office market has begun to recuperate from the coronavirus, a new report suggests.

Are Silicon Valley aka RBA home prices beginning to drop? Suddenly I am noticing more houses being sold close to list price and 200-300k cheaper than expected, based on spring/summer prices.

Seasonality. Nothing to worry about. Next spring we will be off to the races again.

Hope you are right…. But, on second thought, it is not personally advantageous for me to have home prices rocketing up year-on-year.

Becoz, I am already on the verge of hitting my $500k cap gains exemption for my more recent home, even after fully accounting for all money spent on remodeling, real estate commissions, etc. From this point on, I would lose 35c on every dollar of appreciation if and when I sell. Also, this spring I got a good appraisal and locked in 30 year fixed 2.625% mortgage. More equity in my house does not benefit me since I do not intend to take out any more loan like HELOC etc, just want to pay down existing loan slowly.

So, rapid home price increase don’t help me personally. It may even hurt because it would make local services and food etc more expensive. RBA prices going up at the same rate as inflation - I.e., 4-5% per annum would be perfectly fine.

From this point on, I would lose 35c on every dollar of appreciation if and when I sell.

This is the wrong way to look at things.

Does not help me if I have to sell and buy elsewhere, because while I get to only keep 65c on each dollar of appreciation, the houses elsewhere would also have appreciated, and I don’t get a discount there.

And it does not help me if I don’t sell my current home eventually - does not matter how much it is worth as long as I am living in it.

Does not help me if I have to sell and buy elsewhere, because while I get to only keep 65c on each dollar of appreciation, the houses elsewhere would also have appreciated, and I don’t get a discount there.

And it does not help me if I don’t sell my current home eventually - does not matter how much it is worth as long as I am living in it.

Don’t pay down the debt. Leverage it and invest elsewhere for higher returns.

Don’t pay down the debt. Leverage it and invest elsewhere for higher returns.

Already done that. Did a cash out refi this spring. I don’t feel good taking out any more mortgage debt because my PITI amounts to ~ 26% of income. At the same time, not motivated to pay it down super fast either given that I have locked in 2.625% int rate. So, as a compromise, I am just paying the monthly mortgage P+I and no more - this way it will take me 30 full years to pay it off if I stay in the home that long.

At this point, I would rather buy Bitcoin or QQQ with any excess cash saved, rather than pay mortgage more rapidly

Can you quote some examples? What I see is that RBA is continuing to increase / sustain. List prices have creeped up lately though based on prior sales from summer, and it may looks like sold over list is not that crazy.

Here are some recent examples of lower than expected sale prices for RBA SFHs:

All these are 6K lot house, which don’t sell for a premium compared to 10K+ lots. Also Cupertino houses are not in prime school district and one is near freeway. Even in this market, buyers are picky. These houses are in the periphery of RBA.