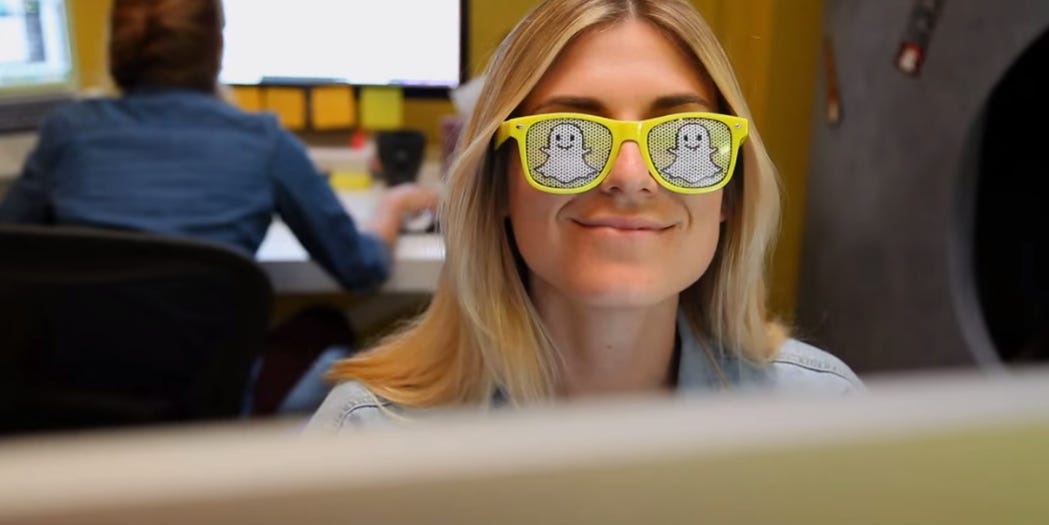 Snapchat, or Snap Inc., is preparing an IPO for late March that would value the company at $25 billion.

Snap will be worth more than 25B on its first day. Meanwhile Twitter is down to 14B and change.

Uber, where are you?

Snap is really unconventional. They don’t behave like traditional tech companies. They are more like Apple, with a founder than has an intuitive product sense.

I will probably buy some Snap shares…

Right! And they have a perfect and single-minded use case: to put videos on your Snapchat account.

Contrast with Google Glass which tried to do everything but managed to do nothing well.

$350M revenue… That’s crazy. They’ll need to double revenue for 5-6 years in a row to justify the valuation. It’s amazing how crowded the data and ad space is getting. It’s really a zero sum game. Everyone Is fighting for better ways to steer customers to buy their products. I think Amazon has it right actually selling all the products.

$350M revenue… That’s crazy. They’ll need to double revenue for 5-6 years in a row to justify the valuation.

Well, that’s what they said about Facebook too way back when. At one point $FB traded at $19.

Well, that’s what they said about Facebook too way back when. At one point $FB traded at $19.

FB roars up after they successfully transition to mobile

FB roars up after they successfully transition to mobile

They transitioned to mobile and became even better at selling ads! Those ads that auto play in your timeline without you clicking on them.

Snapchat already has offices in Seattle and New York and London. And no office in SF or SV yet?

I don’t understand why Snapchat would be worth that much more than Twitter. To me it’s even more useless than Twitter.

Twitter is a great product for news junkies like me. But for everybody else it’s pointless. I considered buying TWTR couple years back. I took a look at their financials and saw what they did with their stock comp. It’s truly outrageous. They are robbing shareholders in broad daylight to enrich themselves. I passed.

Apparently all their suiters concluded likewise and bailed. Twitter is left all alone at the altar.

Snap chat only has ~300 employees.

The issue I see is FB, google, snap chat, Instagram, twitter, pandora, etc are all competing for the same pie of add money. How much is that pie growing per year? It’s not quite a zero sum game, but it’s a slowly growing one. You can only grow fast if you disrupt and rapidly grab market share. How long can anyone maintain disruption? FB is smart going into more than just ads.

Waiting for airbnb IPO whenever that happens.

Snapchat already has offices in Seattle and New York and London. And no office in SF or SV yet?

Snapchat does have an office in SF.

Where do you think these new millionaires look to buy SF>peninsula>Oakland>sbay ??

If economy is going good, Uber will go IPO. Otherwise, it may be held as private. AirBnB may follow Uber.

Snapchat is a failure IPO if it goes IPO. This can not be compared with FB. Snapchat lost its value when they declined FB offer ! IMO, That is the end of SnapChat. If economy gets hit, (If interest rate is hiked!), snapchat may become bankrupt even.

AirBnB and Uber may survive by the business model they have.

We have to wait and see!

Where do you think these new millionaires look to buy SF>peninsula>Oakland>sbay ??

I have many friends at these places, so I could chime in.

For Uber, some of them are already looking for places in Mission Bay(near their new HQ), Alameda, and some even Hunter’s point. But these guys are currently money hungry (their base salaries are under market price except those who joined after 2015 who got much less equity), and most younger ones (which is vast majority) can’t buy a house yet. When they go IPO, I’d guess a big change in market.

AirBnB - I’d expect they would go to Mission, Hayes Valley, even Potrero Hills. These guys are even younger than Uber employees (the place is filled with folks who can’t drink) but the company culture is fairly hippie. I don’t expect them to be taking caltrain anywhere…

Snapchat is a bit more mature, at least in SF office. They have been hiring in a stealth mode, targeting mostly well-established places (Google, Facebook, …). Senior members already own houses in Southbay, and some are commuting to SF from places like Los Gatos. I don’t know if they’ll move to SF due to their kids going to schools in Southbay, but it surely won’t last forever… But a bit younger ones (late 20s~ early 30s) may or may not own homes in South bay. If they do, it’ll be a small condo / THs in Mountain View (94043 ish), Palo Alto (near 101/Oregon). These guys will go up to SF if they go to IPO, or mayyybe San Mateo near the caltrain.