SoFi’s mortgage : Home Loans With No Money Down!

SoFi’s mortgage does it now…

Silicon Valley Elites Get Home Loans With No Money Down

Riskier with no initial skin in the game but I suppose it could work especially with these young techies who make great salaries but may not necessarily have the conventional 20% saved up to buy around here. I suppose it can get someone to remain a loyal, long term customer but don’t we all look for the best deals regardless of provider anyway?

As the tech boom starts to show signs of cracks, there’s some concern that high loan-to-value mortgages are dangerous…“Lenders get so caught up trying to stay competitive and finding a market edge, they basically allow greed to overcome common sense,” says Terry Wakefield, a mortgage consultant who co-founded one of the first online direct lenders in 1998. “Easy money does fuel and accelerate the inevitable bubble.”
And the notion of 100-percent financing makes some in the industry nervous. “Given what we went through in 2008, zero-down financing is suicidal for our country,” says Chuck Green, CEO of Bay Area Captial Funding Inc., a mortgage brokerage that offers loans from about 40 different companies. “We have to learn from our mistakes.”

So bubble yet? I’ve been waiting… for so long.

I thought we all “agreed” on this forum that we will not have a bubble, but sustained double digit increases in both home prices and rents for the forseeable future…

did you not get the memo???

I’m like manch, waiting for the bubble to burst to buy in cheap. Of course I would overpay, is ok at the trough.
If it stays stubbornly high, would buy another cheapo in Austin.

I’m like manch, waiting for the bubble to burst to buy in cheap. Of course I would overpay, is ok at the trough.
If it stays stubbornly high, would buy another cheapo in Austin.

Sounds like you are not like me then. I am buying, peak or trough. As long as the long term trend is up, I am not too concerned with short term ups and downs.

What’s going on “might be good for the borrower and good for the lender,” he says, “but it’s not necessarily good for San Francisco.”

Redfin should fire Glenn. Is he selling real estate or is he working for tenants’ right advocacy groups? No wonder Redfin continues to suck. I bet it’s still losing money every single month.

0% down makes perfect sense. The subprime loans got in trouble not because of low down payment. It got into trouble because they were lending to deadbeats with <600 FICO and no jobs. Contrast this with a fresh Stanford grad who just landed a job at Facebook. The difference couldn’t be larger.

VA loans have for the longest time require very low down payment. I think it’s 3%? And its record has been stellar. Again, down payments is more of a selection criteria. If someone has the withdrawal and resolves to save up 20% down they are most likely good borrowers. But there are also other signals you can consider. In the good old days a banker will look you in the eye and determine face to face, case by case. Now lenders are just all punching the same numbers into the same Fannie Mae software. I love these new comers are taking a different approach.

Where there is a recession or heavy job loss, all the studs now will become deadbeats. How does it matter if they were dead beats before givign the loan to them or if they become dead beats after?

Subprime deadbeats back in 2005 were deadbeats when economy was booming. So they have a much higher degree of deadbeatness than the mythical Stanford grads working at Facebook.

No down payment equals to the cause of the last bubble. By not putting any skin in the game, the seller will push prices upward thus creating another level of pending tragedy. Once they are not working, they will be gone, with nothing to lose, the one paying for that cat in the bag is you, the taxpayer.

Down payment amount didn’t correlate with default rate. Credit score did. You only get a low credit score by being late or defaulting on debt. It shouldn’t be a surprise that characteristic accurately predicts future defaults. Go figure.

20% down subprime borrowers defaulted at a 50% higher rate than prime with 3-5% down.

Found this article, but it does not have any info on % downpayment of prime vs subprime. However, the term negative equity probably means where the the Owner owns more than value named as LTV(Loan to value)

LINK to article -> The U.S. Foreclosure Crisis Was Not Just a Subprime Event 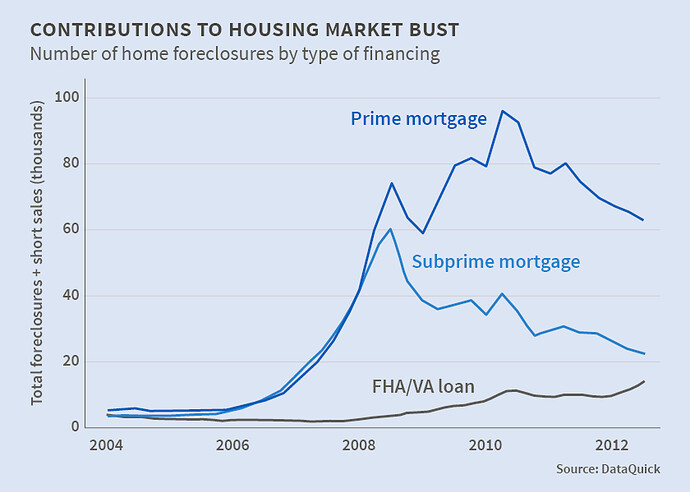 This is one important line in the report

Current LTV(current loan-to- value) is a powerful predictor of home loss, regardless of borrower type. This is consistent with the implications of a traditional home mortgage default literature which shows that negative equity changes an owner’s incentive to keep current on one’s loan

The traditional mortgage default literature also posits a potentially **important role for borrower illiquidity (typically thought of as arising from negative income shocks) in the decision to default, which is a precursor to losing one’s home.**strong text

Does it matter what the down payment was when a HELOC or second is taken out to the max allowed?

I wish there was a way to tell the defaulters who lost their jobs and ran out of resources (or had something bad happen) from the strategic defaulters who bought new homes before defaulting.

Despite any data, something to take in consideration is the rules of engagement. You can walk away from the property you just bought, what the heck, nothing will happen to you but 7 years of uncertainty. Change the rules about the non recourse state I think is called where you will be paying the last penny owned on such property and you will see people being cautious buying a home.

Even investors in this forum would be scared of the notion that they will pay up every penny owned.

Is this another Facebook (money maker) or Uber (money bleeder)???