Here’s a rundown of how prospects of tax reform are shaping investor decisions for specific sectors:

Tech — While the selling in this space on Wednesday may have come as a surprise to some, it makes sense when you consider that the sector has the third-lowest tax rate out of any industry, according to data compiled by S&P Global. That means companies in the group have less to gain from a corporate tax cut, and investors are recognizing that by pulling money and allocating it elsewhere.

Highly-taxed companies — A Goldman Sachs index of high-tax companies surged 0.9% on Thursday as traders bet that they’ll be helped most by the GOP’s proposed corporate tax cut. Further, on Wednesday, the group’s 1.4% return outperformed a similarly constructed index of lower-taxed corporations by the most since 2008, according to Bloomberg data.

Small-caps — The Russell 2000 index of small-cap stocks rose as much as 0.6% on Wednesday as investors buy exposure in more domestic-focused companies expected to benefit most from the GOP tax plan.

Banks — As stated above, banks had an outstanding day, boosted by optimism that the GOP plan will improve US growth and allow firms to pay lower taxes. They rose another 0.9% on Thursday.

THE stock, AMZN is going to gain big from tax reform! 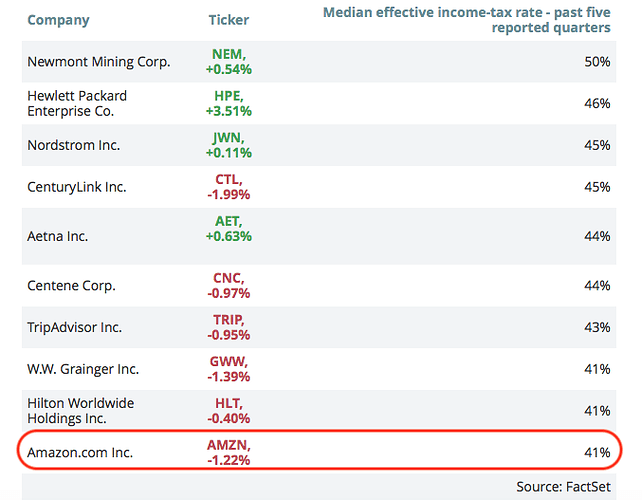 UNH would gain big too?
Owned 500 shares of VZ which had shot up over 20% over the last couple of days. So could be sell the news on Monday. 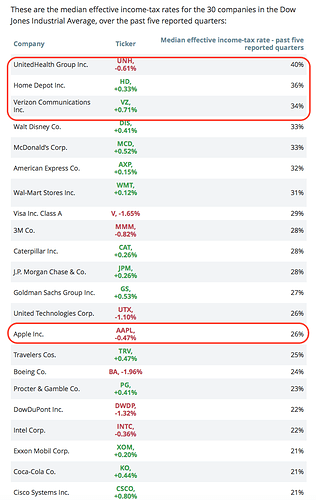 I think more important is percent US profits. Lower tax rate only applies to US profits. This is a good place to start. The last earnings announcement slides should have split by geography.

As you pointed out in another thread, to win big should go for calls. This means the companies have to be quite big for the calls to be sufficiently liquid to allow you to buy in multiples of tens to hundreds. I would therefore prefer companies in DJ and S&P.

Options are more risky than bitcoins

Options are more risky than bitcoins

That’s not true. If done right, they are less risky than owning the stock.