All over the Bay Area, people are keeping a close eye on very full reservoirs, including in Morgan Hill where they're taking precautions as the next round of rain moves in.

Will Morgan Hill be safe? They should have been emptying the reservoir weeks ago. How can they allow the reservoir to go near capacity with the wet forecast?

Will Morgan Hill be safe?

Hope it will be !

Many dams are deemed seismicly deficient. .Most only are allowed to have 60 to 70% of their stored capacity. …this is one of the biggest causes of water shortages. .And yet the Democrats did nothing to secure these vital structures. …Jacked up our water rates 5 fold and mismanaged the money…Why weren’t these dams reinforced during the drought?

In the mountainous folds of California lie hundreds of dams that played a vital role in making it America's wealthiest and most populous state.

95% of Calis dams were built before 2000. And most were built before 1970…Seismic knowledge has changed…Consequently the state has limited the storage capacity to 60% on most dams…Cut our storage during the worst drought ever, instead of rebuilding these inadequate dams…Stupid liberal environmental wackos that run our state government. …Had 20 years to fix the problem and did nothing…They hate dams…In fact many of these wackos would prefer to see them go away and restore the flood plains and wetlands…Never mind that millions would loose their homes and livelyhoods.

The Anderson dam issues have been known for years…Meanwhile the bureaucrats did what they do best…nothing.

Even the best laid plans sometimes need a second look. Like a ready-to-go home improvement project bogged down by an undetected mold infestation and now in need of a design reassessment, the water …

Anderson dam will be spilling soon if it not already spilling. Adding to the situation Coyote reservoir is full and when that spills it spills into Anderson reservoir. Nothing much will happen. You will get minor flooding in coyote creek but it should not flood residential areas. It spilled in the 80’s too. You could see the spill driving by from 101. The floodgates are only designed to release a certain amount of water so they can’t keep to dam from spilling if they wanted to. The only people that will be affected are the homeless camping by the creek.

Meanwhile FEMA is where?
And our Twitler in chief campaigning?
WTF?

Hasn’t spilled in years. …hope it doesn’t have an Oroville surprise. …Sorry but the bureaucrats that are supposed to inspect these dams are more worried about their pensions than doing their jobs…

Last time it spilled the only flooding was in Alviso, and they have done flood control there since. It should not affect any residential areas this time.

The flood control gates are at the bottom of the dam so sometimes they get clogged up with sludge or debris. 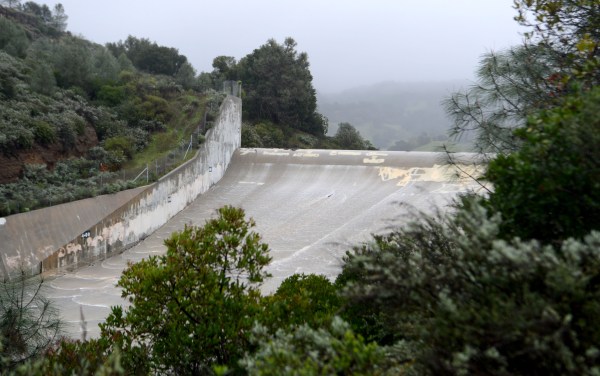 The development is significant because state and federal regulators have directed the Santa Clara Valley Water District to cap storage at 68 percent, or 61,810 acre-feet of water, to avoid a catast…

Both Spillway are used now, water flooding. The park is open, dam is open for visitors (so far) and lot of people are visiting and taking pictures/videos with the water spill.

I haven’t checked the Morgan Hill areas but the forecast for the coast has been downgraded substantially in the last 12 hours. It will be wet but totals have been cut by between 30 and 40% compared to last night (Half Moon Bay to Davenport).

I learned to waterski on Anderson, it is a beautiful lake…

Meanwhile FEMA is where?
And our Twitler in chief campaigning?
WTF?

States and counties have to call in FEMA. They are already responding in some parts of CA. That landslide in La Honda? Ultimately, FEMA will show up but they haven’t. Why not? San Mateo county doesn’t have their paperwork together yet - over a month after the landslide. Anna Eschoo and Jerry Hill did show up for a dog and pony put-on a week ago. To get to the landslide they had to cross a partially closed road. Why was it partially closed?A rootball in a creek that I posted about here over a year ago - which couldn’t be removed because of CA bureaucracy - undermined a bridge abutment by re-directing stream flow and now caused at least half a million in additional damages.
This state is a joke. No wonder the rest of the nation laughs in our face and elects Donald Trump so they don’t have ot face the same dysfunction we do.

Almost all the crisises we have are man made…Once the environmental movement took over, along with osha, the epa and the unions…The government is incapable of acting in the people’s interests…No wonder Trump was elected…Bureaucrats aee afraid to do anything. …All they do is protect their turf and obstruct private enterprise. …

Will Morgan Hill be safe? They should have been emptying the reservoir weeks ago. How can they allow the reservoir to go near capacity with the wet forecast?

According to the mercury news article they have had the flood gates at the dam fully open since 1/09.

But when the other disaster in the other state was happening, and when the governor said “please don’t show up” because we have important things to do…Trumputin, against the warning for wasting state resources showed up with play doh boxes for the hungry people. Nice photo op.

Instead of sending messages of hope, he is getting paranoid inventing attacks in Sweden.

Oh well, those who despise the government and living in those disaster areas, don’t worry, just send a twitter, Trump will be right there with you, I mean, if you wait for him to finish his golf tournament. Remember, you need to pay to play. Cha-chin!

It’s nature. Nobody is safe.

I heard Happy Hollow area is flooded too.