No surprise, they missed and blamed an extreme production ramp at the end of the quarter again.

They are missing their forecast by even more. Deliveries are decreasing sequentially. Model S had a huge drop from 12,000 to 9,745. It’s the same old story of production was much better the last month of the quarter, so things are great. They maintain the annual forecast of 80-90k vehicles.

Also funny how they cited “we have many Teslas in trucks being transported all around the world” as a reason for the weak number.

This company is just a joke. Can’t wait for Apple to come in destroy it.

I agree. Apple’s logistical and supply chain genius will annihilate them.

Apple’s logistical and supply chain genius will annihilate them.

Apple may have money, cash power, but can not destroy Tesla.

I like one of the comments “I feel like TSLA will be one of those stocks where it NEVER a good time to buy but, in retrospect, we’ll all wish we had bought in at ANY time.”

If Tesla stops, lying and tells the truth, their stock price would drop and then would be a good buy…

Reddit is hilarious. …sorry but Tesla is by the IRS definition a hobby not a business that has to show a profit in 5 years…
If a company is going to take 10-20 years to be profitable, and you’re not a long term investor, you probably shouldn’t buy the stock?
permalinkembedsaveparentreportgive goldreply
[–]HonorAmongSteves 1 point 8 hours ago
20 years to be profitable? That’s ridiculous. How can a company intend to stay in business for 20 years if it can’t turn a profit? Where would the operating funds and working cash come from? Are they going to issue debt and pay it off with more debt for 20 years? Who is going to lend money to a company that has never turned a profit for 20 years? Are they going to issue more shares and dilute current shareholders?
If your view is that a company won’t turn a profit for decades, it’s entirely unreasonable to own stock in that company.
permalinkembedsaveparentreportgive goldreply
[–]VolvoKoloradikal 3 points 7 hours ago
A company that hasn’t made a profit in 20 years is a company which will take double that time to break even for investors.

They always miss, so it shouldn’t be a surprise. Was it expected to have a sequential decline?

I’m learning Tesla bulls are bad at math. They talk about Tesla being more profitable than Ford. Tesla has never made a profit. Their operating losses increased from $61M to $186M to $786M. That’s going in the wrong direction. Cash flow is getting worse every year too. So they lose more money every year, have worse cash flow, but the market cap increases? The entire worth is based on the promise of 500,000 vehicles a year. Does anyone believe they’ll do it by 2018 or even 2020?

500,000 won’t make them profitable either. They’ll be investing to get to 1M. They won’t get there without another factory which costs billions.

If Tesla stops, lying and tells the truth, their stock price would drop and then would be a good buy

It is not lie: Elon has ambitious growth plan and he sets based on that, but practical difficulties pulls him out of his plan.

I have made around 25 stocks/etfs purchases so far last one month, all that returned average of 2.5% gain so far.

This time, I did not buy his stock at $192, only reason skeptical about SCTY buyout idea. Had I purchased this at $192, now I would have made 13% profit.

That is Tesla and Elon makes it volatile.

Tesla does similar strategies and of course will take more money from shareholders then and there.

Are they going to issue more shares and dilute current shareholders? A Definite YES, as long as investors willing to pay, Elon is going to use them. 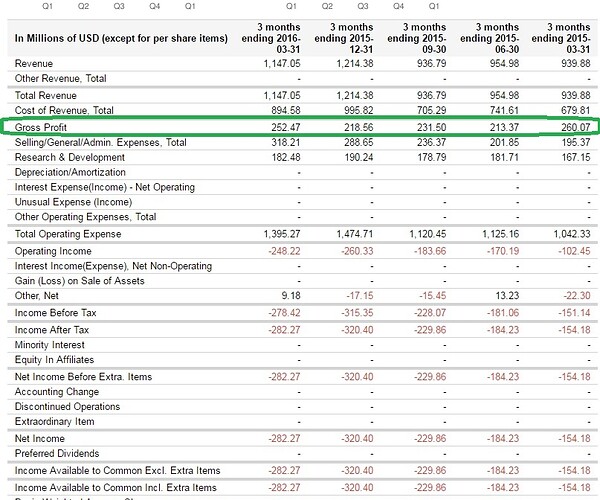 Elon is a pathological liar…he could make even Trump blush

If you can’t differentiate gross profit vs operating profit, then I’m not going to try explaining it. It’s pretty difficult to not have gross profit. You’d have to sell your product for less than it costs to make.

Elon is a pathological liar…he could make even Trump blush

Whether he lies or runs an no-profit company, I made more than 200k out of Tesla with high volatility, especially this year 112k.

This is the one stock never let me down except two times I made put failed with it. Going forward, I may hold a portion of Tesla for long hold.

I made more than 200k out of Tesla with high volatility, especially this year 112k.

What is important is

Because, it’s not only about returns, but also about RISK.

Talking about Tesla as a company or TSLA as a stock for trading or long term (more than 5 years) investment?

Talking about Tesla as a company or TSLA as a stock for trading or long term (more than 5 years) investment?

Yes, when it comes down less than $200, I own TSLA and hold for long term, may be until retirement.This is worth getting and accumulating sufficient interval.

On any case, this volatile stock, very risky one, especially after SCTY take over. Elon may further need money and it takes 2-3 years minimum to come back to track.

The only issue with me is just by seeing more than 25% profit an year, I simple sell it. I really need to control - that is the key issue with TSLA.

I made more than 200k out of Tesla with high volatility, especially this year 112k.

What is important is

% growth on the stock

More important is % growth on the whole portfolio[stocks+bonds]

Because, it’s not only about returns, but also about RISK.

I have never exceeded more than 100k in TSLA so far. My initial buy was 600 TSLA at $41, sold everything in IRA account.

RISK is everywhere, but how much is your decision.

Now, I have diversified to avoid risk, holding various ETFs and stocks, but not TSLA yet. Going forward, I will add TSLA for long hold.

This is straight up Ford Pinto stuff:

The company knew about the fatal crash when it sold $2B of stock in May.

No clue where he does the math that Tesla auto pilot would cut car crash fatalities in half.

This is straight up Ford Pinto stuff:

Elon Musk Says Autopilot Death ‘Not Material’ to Tesla Shareholders
The company knew about the fatal crash when it sold $2B of stock in May.

No clue where he does the math that Tesla auto pilot would cut car crash fatalities in half.

Every day we see accidents and most of the accidents (Major, Minor or Fatal) are caused by human errors, but not really the machines.

Many create sensational news. These kind of news creates wide publicity to Tesla.

Until it is proven that Autopilot is root cause of the issue, it does not change anything.

Anyway, this was also published in Tesla’s site.