The Federal Reserve’s shift to pause mode is helping China’s currency defy a deepening slowdown across the world’s No. 2 economy.

Even after data on Thursday showed a sharp downturn in China’s factory-gate price gains, the yuan hit its strongest against the dollar since July.

Strong Yuan is good for exporters such as the fruit company.

“The yuan can hold up fine” until the Fed hikes again, trade tensions resume and China “goes all-in on stimulus,” said Michael Every, head of Asia financial markets research at Rabobank in Hong Kong. “It’s a ‘when’ and not an ‘if’ for when it reverses direction again and we test new lows.”

Some1 please remove him.

I am old enough to remember the right used to clamor for austerity in the middle of the Great Recession and ridiculed Bernanke as Helicopter Ben. Funny how that changed.

Who wanted austerity? They wanted tax cuts instead of stimulus spending. Stimulus spending created/saved 1 job per $400k spent per numbers from Obama’s own team. Anyone who thinks that was an effective and efficient use of money should know $80k of GDP growth creates 1 job.

But in 2011 Republicans in the House of Representatives demanded spending cuts as a precondition for raising the debt ceiling, a vote that had historically been pro-forma (the ceiling has been raised 78 times just since 1962). The resulting Budget Control Act of 2011 has significantly reduced the growth of discretionary spending. Both in word and deed, Republican lawmakers have embraced and enforced fiscal austerity, and the result has been the most discouraging recovery on record. 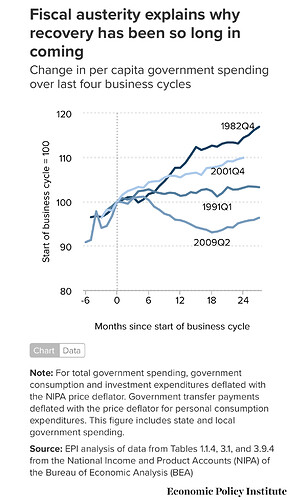 Why is recovery taking so long—and who’s to blame?

We are enduring one of the slowest economic recoveries in recent history, and the pace can be entirely explained by the fiscal austerity imposed by Republican members of Congress and also legislators and governors at the state level.

The Federal Reserve’s shift to pause mode is helping China’s currency defy a deepening slowdown across the world’s No. 2 economy.

You know the trick, buy only when economy in recovery path. No rush. Second, buy the top moat company (like AAPL, AMZN,…etc).

Anyway, I am not in other country market unless WB gets into it. If they buy, I buy the same stock.

This is off line to original thread. Some bloomberg report about 2018 china report

You’re better at math than that. They didn’t cut spending. They slowed the growth rate. Spending was still growing. 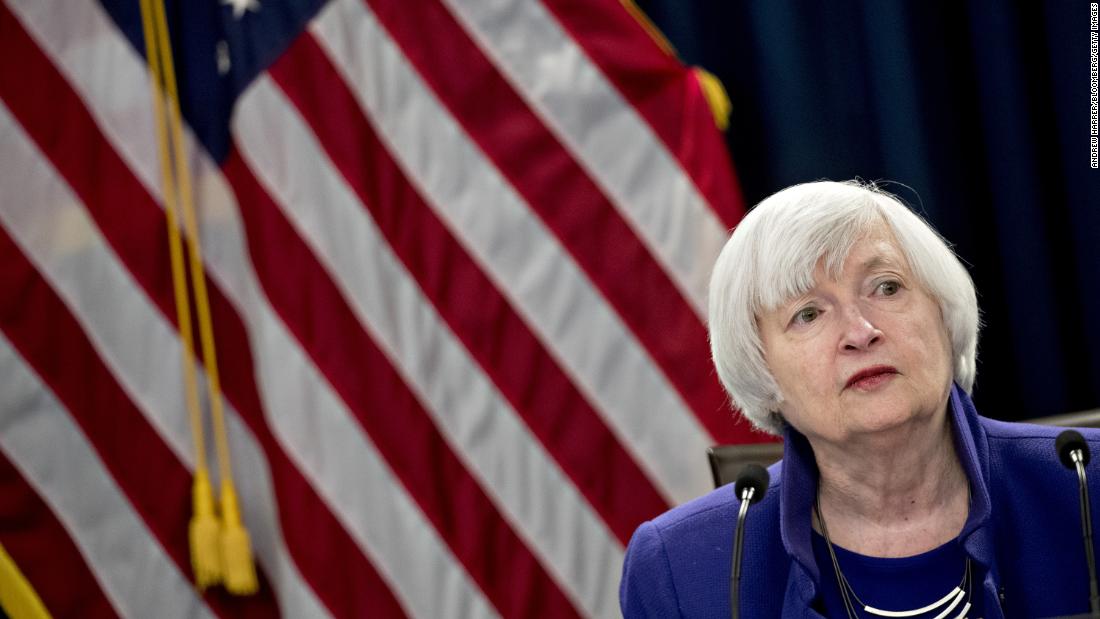 Rock-bottom interest rates have pumped up stock prices, knocked down mortgage rates and supported the creation of countless unicorns in Silicon Valley. Savers, on the other hand, have been crushed by near-zero rates.

Rock-bottom interest rates have pumped up stock prices, knocked down mortgage rates and supported the creation of countless unicorns in Silicon Valley. Savers, on the other hand, have been crushed by near-zero rates.

Thought the journalist is pandeya.

Oh Yes! Please do it. If only printing money could solve all the problems.

Just print all you need to pay all the debts. Do not stop there. Print even more and deposit into all open bank accounts in the United States. Every one will be rich, prosperous and happy. No one will have to go to work next morning. No need for a risky stock market, or any business. Just an ATM card will suffice as a key to happiness. There will be no competition and no crime. Because, you will have that magic ATM card to draw unlimited amount of money. Thanks to the printer at FED.

The article sounds like the book I’m reading by Joseph Stiglitz where he writes about how low interest rates and recessionary environment have played their parts in a vicious cycle intensifying inequality. The effect on savers is reduced consumer spending/demand. Corporations move money to stock buybacks and more capital intensive technological investments which cut low paying jobs. The result has been slowed growth, falling spending on public services and an ever-widening income gap where a growing share of people cannot make ends meet.

“QE was basically a gift to the 1 percent.”

“The interest rate is not the right issue, the real issue is making sure credit is available to expand the economy.” 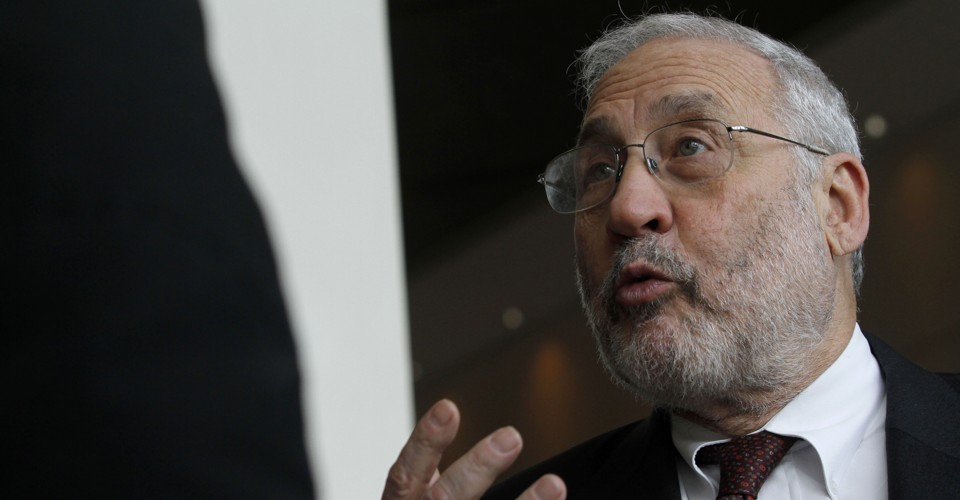 A Conversation With Joseph Stiglitz

The Nobel-winning economist discusses the Fed, the election, and the role of economists in fixing inequality.

I am linking this cartoon from 1912. People were able to see what FED will eventually become. There is another cartoon from the early 1900 even before the FED was created. The cartoon shows a healthy cow sucking milk from a weak calf. I searched google but cannot find that cartoon. What happened? Will share if I can find it.
But, see this cartoon on RUBBER MONEY Savers are not a meaningful percent of the population. Pretending interest rates are the cause when most people have less than $1,000 in savings isn’t accurate.

The article goes towards the real issue but misses the point. The economy can’t grow without increasing debt. It’s the major defect of a services based economy.

I’d argue the bigger issue is our education system. We steer people away from good paying blue collar jobs and into six figure student loan debt for degrees that don’t provide careers. A huge part of the young populations anger is from massive student debt and no career. That’s wrong choice of major. They bought into the study whatever you want, and college will provide a career BS.

It’s not that we lack good paying careers for non-college grads. It’s that we don’t promote their existence or prepare people for them.

The economy can’t grow without increasing debt. It’s the major defect of a services based economy.

The above is not a true statement. You can grow economy even without debt (by printing more money) . If you just hold the money supply constant (not have a rubber money). Economy will still work. Innovation, productivity, and better utilization will lead to more economic output with same money supply. Prices of everything will drop and you will see some new product and services over time (like there was no internet 50 years ago, or there was not uber 10 years ago).

the FED was crated to protect banks and the wall street from their bad decisions (which is inherent in banking and investment - you do make bad loan, or you do invest in stock that looses).

Economy = GDP. You can’t grow it without increasing debt, since printing money increases debt. Once debt service gets too big, then people can’t borrow more. The economy will cease to grow.

It’s why increasing interest rates eventually leads to a recession. Increasing rates increases the cost of interest on debt. That means more of people’s income goes to paying debt, and they have less income for other economic activity. Eventually, GDP will start to decrease.

It does not work the way you have described. People (or businesses ) cannot borrow because they are not credit worthy and do not have lenders trust. Throwing good money after bad only makes problem worse. That is why printing money does not solve the credit worthiness issue (ability to earn and intention to pay). If printing money could be solve all the problem, I will be standing with you for installation of additional printers at FED.

An example : Assume there is a student in classroom consistently doing poor in a subject, say Mathematics. Giving him grade A will not make him a mathematics genius. It will only make the students who do good on math resentful about him and the teacher. And the employers will not trust the grades, the teacher, and may be the school. There is a word for it. Grade inflation. Solution is to make him improve the in maths, or pick another subject to major.

How do you define economy?

You defined it correctly
One way to look at Economy= GDP.

y is GDP
C is consumer spending
I is private sector spending
G is government spending
Export -import is what is produced in USA but consumed outside USA.

That means the economy can’t grow without increasing the amount of money.

That means the economy can’t grow without increasing the amount of money.

Nothing I said above implies that the amount of money has to be increased for the economy to grow.
The economy is cyclical in nature. It expands and contracts cyclically.

Current model requires creation of new debts and population growth to drive economic growth. This is not sustainable. Hopefully a Nobel prize economist could get us out of this mess.