Column: There's still no evidence that taxes are driving residents out of...

California has been losing residents for years, but Trump's tax bill may not have played a role. 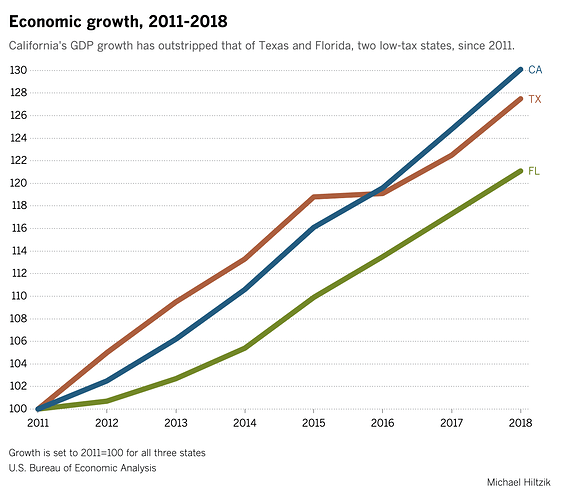 A good example of how things aren’t so simple came from Chipotle Mexican Grill, the fast-food company that recruited Brian Niccol from Irvine-based Taco Bell to be its new CEO in 2018.

Among the terms of Niccol’s deal was that the company would move its headquarters from Denver to Newport Beach, where he was living, even though California has higher property taxes than Colorado and nearly twice the per capita income tax burden.

The disparity is even greater for multimillion-dollar earners like Niccol. Colorado’s personal income tax is a flat 4.63% — in other words, for every million dollars Niccol earns after his first million a year, he’s paying $133,000 as a California resident but would pay only $46,300 in Colorado.

On the other hand, Niccol’s daily commute became even shorter than it was when he had to travel from Newport Beach to Irvine. And he didn’t have to relocate his three school-age children. These evidently were more important factors than taxes. (Of course, Niccol’s demand created problems for Chipotle’s 400 employees in its Denver and New York offices, which were closed.)

Must be a crazy guy?

Among the nontax rationales for interstate moves, retirement, “family” and jobs tend to rank high, according to an annual survey by United Van Lines. Retirement was cited in last year’s survey by nearly 25% of Californians moving to other states, and only 11% of those moving into California. Indeed, the state experienced a net inflow of residents ages 18 to 54, but a net outflow of those 55 and older — that is, those nearing or already in retirement.

What I have been saying all along. People come to California to hustle.

Who move away? Old people.