Think your commute is bad? These Central Valley residents have it worse than almost anyone in U.S

Think your commute is bad? These Central Valley residents have it worse than...

Commute times in California’s Central Valley are some of the worst in the United States as waves of Bay Area transplants seeking affordable housing contribute to worsening traffic. In Los Banos, more than one-fifth of residents travel beyond 90...

It’s more than two hours before the sun will fill the Central Valley with hazy light and this once sleepy farming town is already alive.

Cars quickly back out of driveways, filling dimly-lit side streets with traffic. Anxious drivers jostle for position on Pacheco Boulevard – the city’s main commercial street - as they head for the highway. The line for the drive-thru window at McDonald’s on the edge of town is backing up.

And Bruce Simmons, as he does most weekday mornings, is checking a Caltrans traffic app on his phone to see if trouble awaits on his commute over Highway 152 and into the Bay Area.

“There’s nothing going on right now,” he says, clearly relieved as he gets into his truck just past 4:45 a.m. to begin his journey. He’ll drive an hour to Gilroy, then hop on a 90-minute train ride to Menlo Park, where he works as a research analyst for a tech firm.

Even on a good day, Simmons’ commute and the commutes of several hundred more residents of this city are among the worst in the United States. Roughly 21 percent of Los Banos workers have at a least a 90-minute ride to and from work, the highest percentage in the nation, according to a McClatchy analysis of U.S. Census Bureau data for cities with at least 5,000 employed workers. 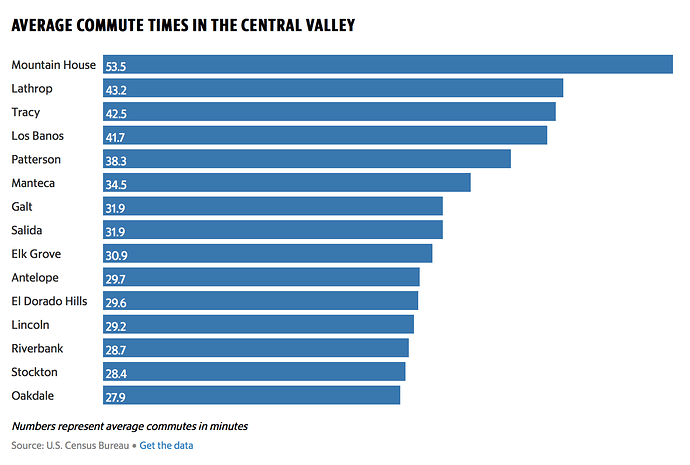 But the weather is amazing!!

Funny that Mountain House actually has the longest commute of all Central Valley towns. It’s just one hill across Livermore.

Better than Seattle and Boston!!

Is that hour commute one way or 2? One hour one way is pretty standard for most people I know. When I worked in the Fidi, it was about an hour each way with a drive to Bart station, bart to city, and walk to office

For sure, 2 hours each way. My god, sometimes it takes me an hour to get home from the Embarcadero to the Sunset…

Time to FIRE. What good is money if you don’t take advantage of it?

My god, sometimes it takes me an hour to get home from the Embarcadero to the Sunset…

Well yeah…that’s N Judah for ya…

Not fired. 9 mins by car. I take shuttle and walk 20m to shuttle stop as an excuse to walk. Will probably get boring at some point, then i will build an electric skateboard

i will build an electric skateboard

Or, the ill named commuter 7X Express at night. Man, that gridlock around Civic Center is no joke.

Don’t know the route for 7X, is that the former 71L?
How about NX? That one was pretty good I thought.

if i can commute to work on skateboard in 20m that’s a win.

So people ride electric scooters in South Bay? It’s all the rage here in SF.

Yes, replacement route name. NX is too far from my house and last stop is only Bush and Montgomery. The best is still the L Taraval for overall speed since once you hit West Portal station it can go pretty quickly.

I see more skateboards than scooters. American style. Scooters might be more asian

My daily commute consists of walking downstairs from the bedroom to the living room, about 15 seconds.