To Understand Rising Inequality, Consider the Janitors at Two Top Companies, Then and Now 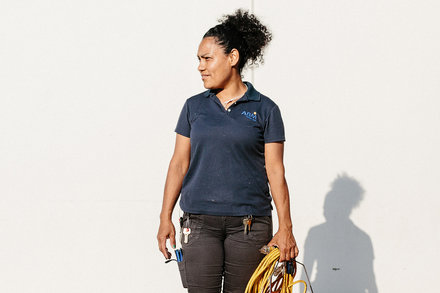 Focusing on core competence and outsourcing the rest has made U.S. companies lean, nimble and productive. It has also left lots of people worse off.

Gail Evans and Marta Ramos have one thing in common: They have each cleaned offices for one of the most innovative, profitable and all-around successful companies in the United States.

For Ms. Evans, that meant being a janitor in Building 326 at Eastman Kodak’s campus in Rochester in the early 1980s. For Ms. Ramos, that means cleaning at Apple’s headquarters in Cupertino, Calif., in the present day.

In the 35 years between their jobs as janitors, corporations across America have flocked to a new management theory: Focus on core competence and outsource the rest. The approach has made companies more nimble and more productive, and delivered huge profits for shareholders. It has also fueled inequality and helps explain why many working-class Americans are struggling even in an ostensibly healthy economy.

The $16.60 per hour Ms. Ramos earns as a janitor at Apple works out to about the same in inflation-adjusted terms as what Ms. Evans earned 35 years ago. But that’s where the similarities end.

Ms. Evans was a full-time employee of Kodak. She received more than four weeks of paid vacation per year, reimbursement of some tuition costs to go to college part time, and a bonus payment every March. When the facility she cleaned was shut down, the company found another job for her: cutting film.

Ms. Ramos is an employee of a contractor that Apple uses to keep its facilities clean. She hasn’t taken a vacation in years, because she can’t afford the lost wages. Going back to school is similarly out of reach. There are certainly no bonuses, nor even a remote possibility of being transferred to some other role at Apple.

Yet the biggest difference between their two experiences is in the opportunities they created. A manager learned that Ms. Evans was taking computer classes while she was working as a janitor and asked her to teach some other employees how to use spreadsheet software to track inventory. When she eventually finished her college degree in 1987, she was promoted to a professional-track job in information technology.

Less than a decade later, Ms. Evans was chief technology officer of the whole company, and she has had a long career since as a senior executive at other top companies. Ms. Ramos sees the only advancement possibility as becoming a team leader keeping tabs on a few other janitors, which pays an extra 50 cents an hour.

They both spent a lot of time cleaning floors. The difference is, for Ms. Ramos, that work is also a ceiling.

The main culprit is the liberal policies,

Firms in the United States are legally required to offer the same health insurance options and 401(k) match to all employees — meaning if those programs are made extra generous to attract top engineers, a company that doesn’t outsource will have to pay them for everyone.

Globalization is the fundamental reason. All other observations are superficial, you can focus on one aspect out of 100 factors and draw a conclusion seemingly making sense but really does not.

When equality in US does not improve much, the global income equality has gone through the roof. China and India and Mexico have helped billions of people out of poverty and the difference between countries have shrank a ton. Considering the whole world and the whole human race, 2017 is magically better than 1987.

Immigration status is also a difference between 2 candidates which is a taboo to talk about. I guess a lot of black candidates today have better career path than Evans. If you compare the career and income for black candidates over 30 years, it might be a different picture than Evans vs Ramos. Black women now get more education and they may choose better jobs upon graduation and janitor jobs mostly went to recent immigrants. It’s rare to find a black or white janitors at Apple.

This journalist wrote such a long story, but provided no conclusion and missed the real reason, that’s globalization. Sometimes some journalists do have an agenda and they can focus on 1 less important aspect of a complex issue and skillfully lead readers to their agenda.

The education level and English proficiency for the 2 main characters could also be a factor, which might be inconvenient to list. Anyone can take classes at college and move to different careers if they are capable. Google has good diversity programs and a female minority can apply for the job of facilities management, Ramos can apply as well.

In the old days, Kodak can only mostly hire American citizens in upper state New York. Modern coprporations have the global talent pool for software jobs and janitor jobs alike. Ramos could very well be a more talented and a more hard working and a less demanding janitor than what you can find 30 years ago in upper state New York. Similarly Apple and Google get a lot of software engineers who was born abroad and the competition is many times more fierce for job candidates when you are competing against people from the whole world.

Also corporations have become less generous and less loyal to all the employees. Kodak can keep an employee for their lifetime, modern corporations will get rid of people when they are over 40 or 50. Actually modern corporations like to have emloyees leaving constantly and hiring for the younger and better employees constantly. Maybe software favors young and manufacturing favors experience.

The article admits that adjusted for inflation their pay was the same. They should have called it a comparison of opportunity for upward mobility. It probably is more difficult to move up, because we import talent vs develop it. Although, I meet people semi-regularly that started as warehouse employees and now work at corporate.

Granted, workers share some blame in that. How many people left a company after getting tuition assistance?