Stunning graphics showing how interests rate has fallen since the 14th century:

Could interest rates enter negative territory permanently? This chart plots trend data over 700 years, showing that it could be a possibility.

Less stunning graph from the Economist: 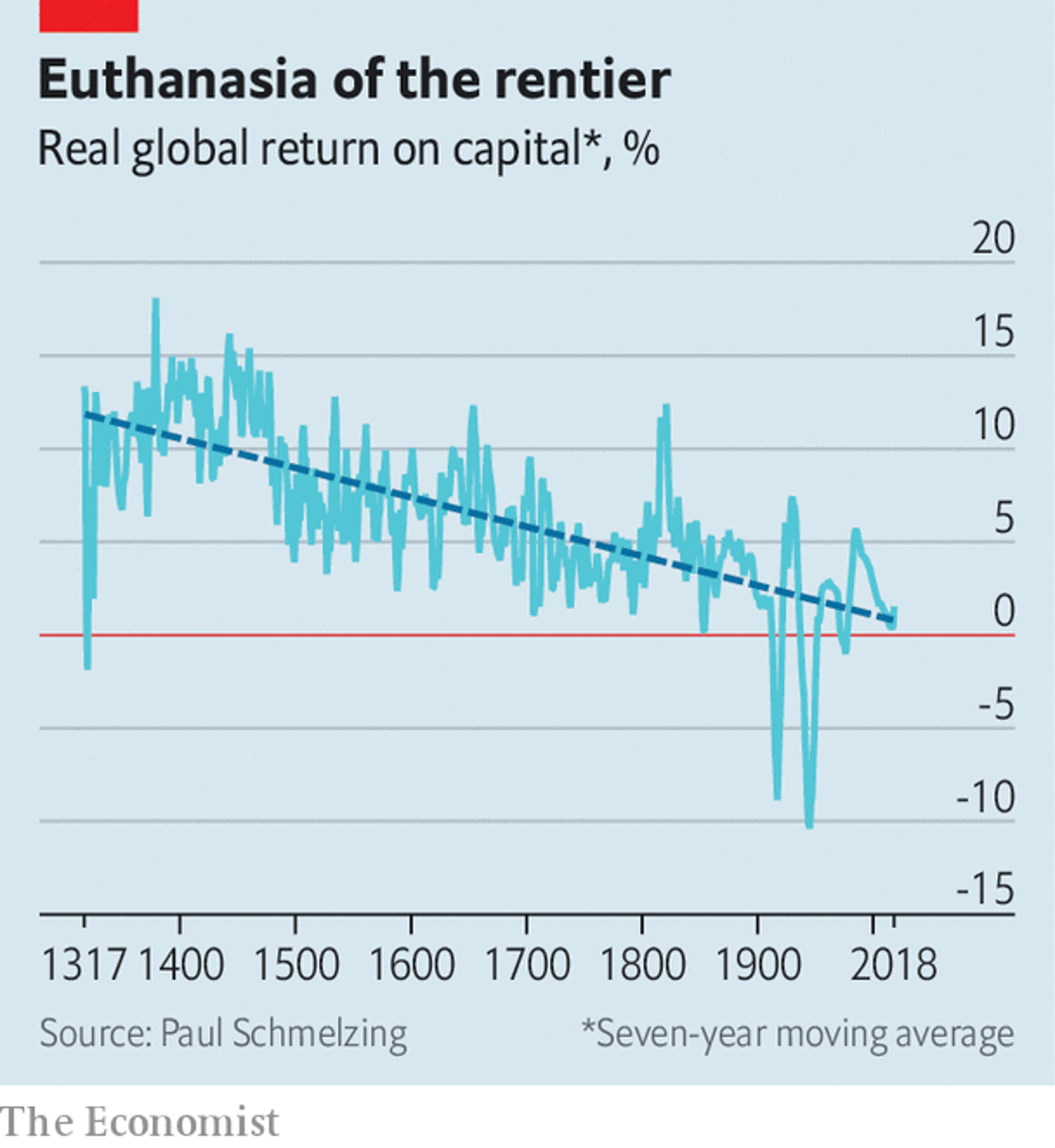 Central bankers’ biggest problem may be ancient—and getting worse

Mr Schmelzing’s conclusions pose an even starker challenge to central bankers. If the historical trend continues, by the late 2020s global short-term real rates will have reached permanently negative territory. By the late 21st century, long-term rates will have joined them. Even unconventional monetary policies, which rely on driving down long-term rates, would then lose traction. Any hopes for nominal rates of 2% or more, in the long term, may prove to be a pipe dream.

Cash is trash. Get as much (good) debt as you can.

At this point, governments have so much debt that higher rates are very unlikely. Every country would either go bankrupt. I still struggle with rates going negative though. Maybe rates hitting zero will be when governments finally have to get their financial houses in order.

I thought some European countries have already gone negative? Swiss rate is -0.75% I think. Also Japan has been at -0.1% for a few years now.

They are negative for some government debt. We haven’t seen negative rates for consumers yet.

I guess I’m skeptical they can go negative for an extended period of time or without causing longer term consequences. We don’t know, since it’s uncharted territory. It’s even more complex in Europe, since countries issue their own debt but share the euro currency.

Who knows, maybe it’ll stimulate growth. People will want to spend or invest their money instead of being paid a negative rate to hold it.

In theory, RE would do really well. Why not buy the max house you can when you’ll pay back less money over the life of the loan? Even at our low rates, the early year payments are mostly interest. Imagine if payments were principal only, and the principal owed was declining due to negative rates. That could lead to a huge RE bubble with a nasty hangover once rates aren’t negative anymore.

Government first created inflation. Then negative interest rates. What is next?

Sometimes you are very brutal. But, it is so true. It has happened and it can happen again.