Why not Selling? (Woodside) 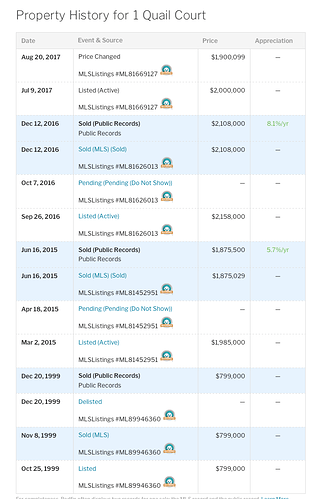 So folks, what’s wrong with this house? It’s Woodside with lot size over 2 acre. What’s not to like? @sfdragonboy, you want to 1031 into this?

Not really Woodside…In the county on Skyline, half moon Bay schools…

So the sellers realized they made a big mistake buying and trying to unload?

Probably couldn’t read a map and didn’t realize it is much closer to HMB than Woodside. …lol

Weather is much more like DC than PA and in the summer 92 is gridlock. …probably couldn’t afford the helicopter

No…too woodsy for me and too south for the Mrs…

Hard to say why not moving, but if I had to guess, the place is too Asiany for the non Asian buyer. The kitchen is sooooo chinese looking. The house would need to be redone throughout to get the Asian out. Hey, I don’t pull any punches. I will ripe on my peeps when I have to…

I bet it was staged by six two one…Definitely going for the Asian buyer .

Vivian Chen is the owner

Well, the kitchen cabinetry and countertops are so cheap looking. Come on, was there a sale at Granite Expo? Yes, if this kitchen were in a Taraval Street kitchen maybe ok…not in Woodside. The buyers are much more discriminating and if I saw this the moment I walked in I wouldn’t really want to see the rest of the home because I know what I am getting. At nearly 2M, I expect to be wow’d. Martin Yan is not going to wow me…

2m won’t even get you an empty lot in Woodside proper…This house is not IN WOODSIDE…the listing agent is delusional. …It is in unicorporated San Mateo County