You Should Have Bought Commercial Real Estate

Think you did well by buying a few houses during the downturn? Well, you could have done much better: 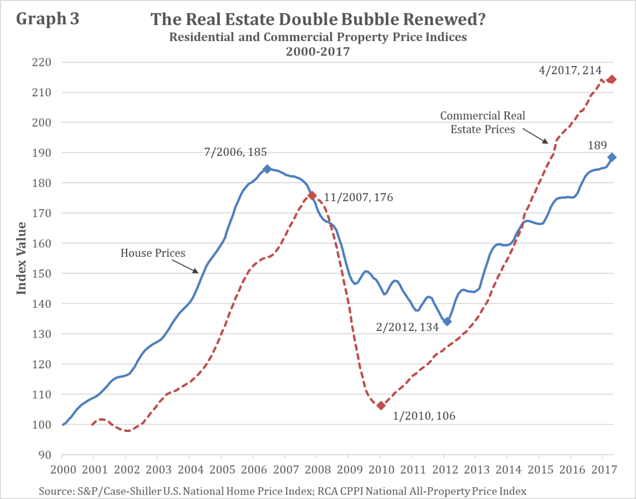 Commercial real estate prices dropped like a rock after 2007, far more than did house prices, falling on average 40 percent to their trough in 2010. Since then, the asset price inflation has been dramatic: up more than 100 percent from the bottom. In inflation-adjusted terms, they are up 83 percent.

Bank credit to commercial real estate has been notably expanding. It is up $238 billion, or 21 percent, since the end of 2013 to $1.35 trillion. It has grown in the last two years at more than 7 percent a year, which is twice the growth rate of nominal gross domestic product, although not up to the annual loan growth rate of more than 9 percent in the bubble years of 2000-2007.

Is the real estate double bubble back? - R Street

Average U.S. commercial real estate prices are now far over their 2007 bubble peak, about 22 percent higher than they were in the excesses of a decade ago, just before their last big crash. In inflation-adjusted terms, they are also well over their...

That may be, but when I look at the graphs the home prices one is not that bad at all. Someone who was heavily invested in commercial properties may not have survived 2010 to laugh about it today…

That may be, but when I look at the graphs the home prices one is not that bad at all. Someone who was heavily invested in commercial properties may not have survived 2010 to laugh about it today…

I know one that didn’t. He was worth tens if not hundreds of millions before the RE crash. He diversified from his business into commercial RE before the crash. The crash killed him financially.

How so? Please share more… did he borrow too much and couldn’t pay the mortgages??? Curious mind need to know…

Same here…you may have seen my example of a successful small business owner who literally made it work against the big boys (at the time granted before Amazon) and he pissed it all away by being too much in the stock market. Died probably on the streets penniless. What a waste…

How so? Please share more… did he borrow too much and couldn’t pay the mortgages??? Curious mind need to know…

He bought pretty close to peak pricing. The CAP rate was really low, so it was barely covering his expenses. From what he explained, he had multiple tenants that went out of business and broke their lease. You can go after a bankrupt business in court, but what’s the point? You spend a lot and are unlikely to ever collect anything. He had to find new tenants, but there was a ton of vacancy everywhere. New rents were 50% of old rents, and landlords were offering 1 month free per year on the lease. So you sign a 5-year lease at 50% of the old rate and have to give them 5 months free. The rents weren’t enough to cover his payments on the properties. You need to have enough reserves to weather that storm and hope that in 5-years rents are high enough you can become break even again.

Commercial crashes much faster, because businesses fail creating massive vacancy. You don’t see massive vacancy in residential, because people still need a place to live. It doesn’t crash as badly.

That’s why when RE agents try to convince me to exchange 4plex into triple net crap, I hang up…

Yes, looks like a high risk high reward situation with commercial. Might be something to consider! But my passion always lies in residential real estate…

Yes, looks like a high risk high reward situation with commercial. Might be something to consider! But my passion always lies in residential real estate…

What about residential multi-family units (they are under the commercial umbrella right?). I feel like that’s next step, and how you can scale after you max out your borrowing power using your income.

I also like @Elt1’s self storage idea. It’s close to being residential, and we can count on people accumulating junk.

I seriously looked at a nice little shopfront with living space above in a relatively quiet neighborhood (I think it was telegraph hill) . I didn’t have a business, but I didn’t think I’d run into problems using the downstairs as a sitting room or something like that, and the price was right compared to condos

I think the trend is actually reversed, that storage places will become obsolete as a business model. First of all, baby boomers are dying off so there goes slowly a huge generation of folks who may have had a thing for storage space. But when I look at myself, one of the last Baby Boomers I am downsizing if anything.
Def no need for paid storage spaces. Then, if you look at millennials as the latest generation they don’t hold on to things at all. No cars, fairly mobile minimalists. So, why the need for storage spaces? If anything, like shopping malls they will be converted to housing or open space. People simply will not hoard things anymore to that degree.

People think of millennials like they are some kind of special species from outer space who will behave all different from us. I say nonsense. They are just vain like us. I predict they will collect just as much junk as everyone of us.

Dude, I am never wrong…

I have unshakable faith in the new generation. They are every bit as bright and as stupid as the older generation. No more, no less.

The height of this millennial bullshit is when I read an article that claims millennnials are not that into sexual anymore. WTF? Are we still taking about human beings?

Why not? Maybe human beings will eventually evolve to a point where reproduction is done in a lab… oops did I just say that?

Evolution is a very slow process. We don’t need big muscles to hunt animals anymore and yet women are still atttacted to physically strong men.

Reproduction in a lab is only the transition step. Cloning and creating by spec is the final stage. In the lab, scientists already can mess with DNA to create a new species and improve intelligence by many folds through messing with the brain connections (forgot the scientific name). So the risk of humans annihilated by AI is actually lower than by genetically altered “humans”.