A Sign Of Too Many Condos Flooding The Market?

I suppose when you build so many condos (mostly high end, high priced ones) this was bound to happen at some point. As we wrote when we first reported that asking rents in San Francisco had barely moved in the first quarter of the year, “there are roughly 7,300 units of housing under construction in San Francisco, including at least a thousand new apartments which...

My world-domination strategy is to load up on low end condos in SF. Should I be happy about this?

Hard to say. Is there such a thing as a low end condo in SF anymore? Isn’t that an oxymoron? With so much supply coming online, how can pricing not be impacted? At least in the high end, we should see a reduction in rents or condo sale prices as developers have to move their product or face even more price cutting later as competition units come online. It is one thing if demand is somehow able to absorb the supply, but what are the chances of that, really? I mean, these places are so expensive on the buy or rent sides.

Me personally, I do not like condos because of the HOAs and CC&Rs. I don’t like having to pay for things that I don’t use or see value in. I also don’t like being told what I can or can not do with a property that I technically own. Either I am in control of my destiny or I am not interested. 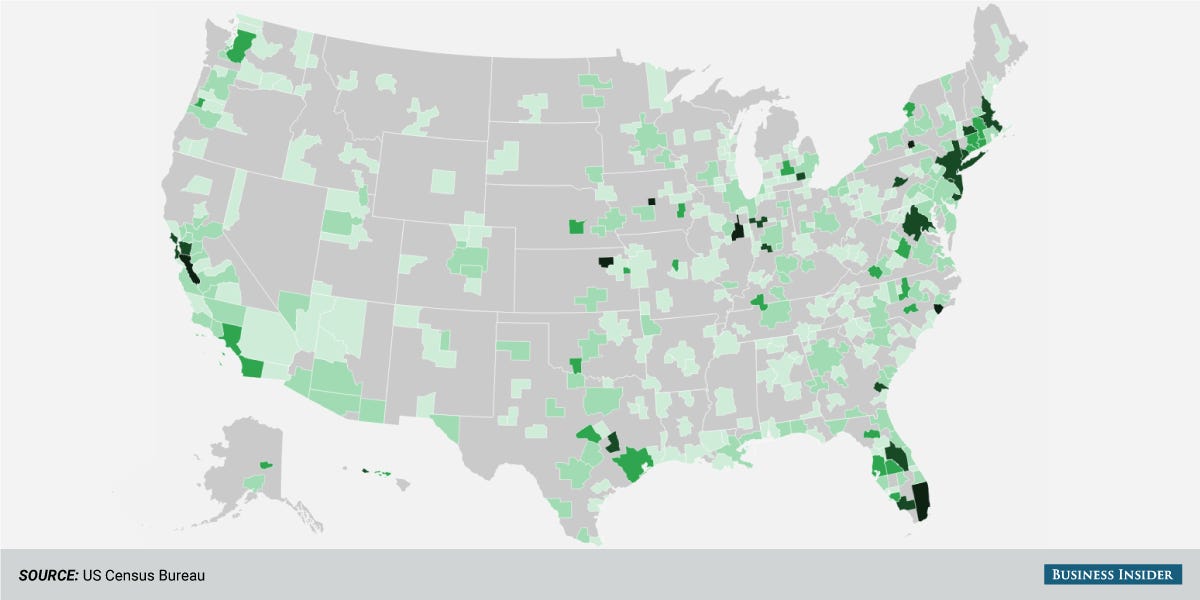 Immigrants are moving to these US cities

According to US Census Bureau population estimates, these are the metro areas with the most immigration last year, adjusted by population.

Low end condo in SF is something in the 600s range. I think that’s the sweet spot rental wise. You can rent them out for 3500 so cash flow is actually positive for a change.

@Elt1 keeps saying SFH appreciates faster fhan condos and townhouses. I am not sure. Would love to see data. But in SF an old and scruffy house would attract the wrong types of tenants, and higher priced houses would bleed my cash dry. Thus the “low end” condo strategy.

SJ is a great town. At my ex-local Chinese joint many of the wait staff and cooks moved down to SJ from SF. BTW that’s why I think the best Chinese restaurants are outside of the 7x7.

My big bro shares your enthusiasm for South Bay chinese eats vs that in SF proper. However, until there is something better, down there, we stand by our San Tung dried fried chicken wings to the very last wing… Have you gone yet?

New construction tends to be high-end. It’s the only way for the projects to be profitable. That’s not many new units for a city the size of SF. It might create a short-term lull in rent increases. That’s about it though. It’s not nearly enough to keep up with increasing population and household formation (e.g. kids moving out of their parents).

Condos do appreciate(but land appreciates more) …can be good investments. …But the that fact that condos and the Exburbs are the best and only deals out there suggests that the long real estate bull is getting tired. I always predicted 2017 could be the beginning of a downturn. …Now is not the time to leverage up and buy recklessly. …be careful and buy for the long term…

Predictions are hard. That’s why diversification is done even by the most consummate & knowledgeable investors.

That’s why I am surprised when normal people with no skin in the game speak with such authority when they predict the future prices of assets. I understand on CNBC someone would do so because it’s how they make money & hence want to sell their products. OR some Realtor doing so, because they make their money by selling & buying RE.

Agree. That is why we refrained from buying any more real estate at this point. And, we are fine with it. Nothing wrong with holding cash while you wait and see what happens. At the end of the day, you have to be able to sleep ok.

If only I can convince my wifey that I really, really need that vintage NSX…

Have you gone yet?

Not yet. I will give it a try next time I am there… Those wings do look kinda oily though.

You call yourself a data guy, right? Well, digest this: over 5k reviews on Yelp cumulating in a sold 4 star rating. Yeah, those wings must really suck…

With so much supply coming online, there is simply no way that luxury condo pricing (sales/rent) can stay high for long. If all of these places are still being snatched up, I would be really surprised. On the rent side, I would think people stay for a year and leave as they find cheaper housing, so constant turnover. Any folks have the true inside knowledge of what is really happening in these condo complexes? Maybe someone lives in one of the developments and knows in general the occupancy percentage to date and knows how that has changed say in the last 12 months?

Plenty of luxury condo construction in SF, and not much else

Using their own data as well as that compiled for the San Francisco Planning Department’s 75-page 2015 Housing Inventory report (released on May 27, 2016), Paragon Real Estate recently released its…

I think it could affect mid-tier more. Right now, the lack of premium units allows people to command premium pricing for what are really mid-tier units. Buyers/renters will quickly realize they can have newer and better for a similar price. That’ll force prices of the mid-tier down.

I doubt that Senseamp put his money where his mouth (or fingers in this case) is. His idea of June puts on the stock market was definitely off.

His idea of June puts on the stock market was definitely off.

Right! I forgot that part of his prophecy… “Sell in May and go away” is definitely broken this year so far.

What exactly is the definition of luxury condos? The example they gave in the article is asking for 3.5M. So let’s say it’s condos priced at 2M or more. It’s a market I have about ZERO interested in…

That end of the market is more tightly coupled with the stock market. There is some sign the market is itching to march higher. If it indeed does break through you don’t need to worry about these condos.

Well, my concern is the general supply of condos that are coming online here. Seems to be a lot and I am not sure what the absorption rate is at this point. I mean, are these developments still selling out or are there actually quite a few vacant ones out there? Not going to lie, I as an owner have grown a liking to the higher rents here…