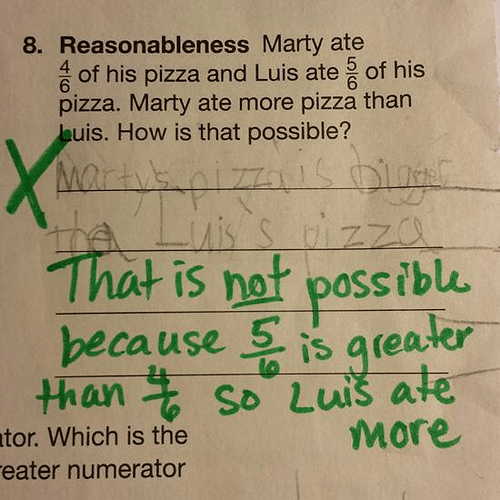 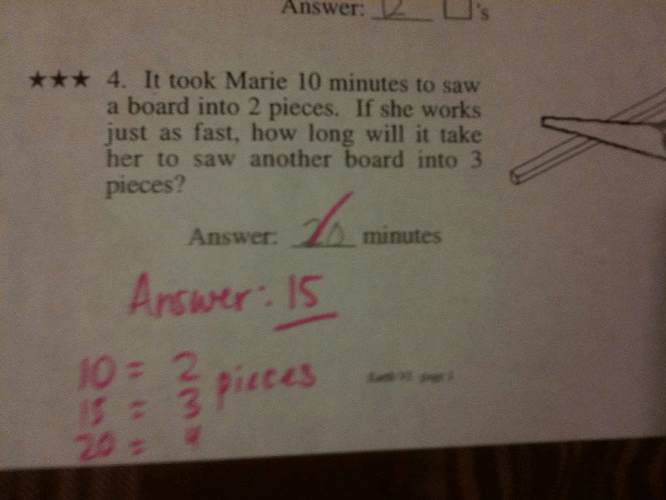 Better goes back to Hong Kong

I need to retire before those kids enter the work force. There’s no way I have the patience.

What is source of this picture?
Isn’t it a joke?

Is this one of your girls’ homework? Actually if you look at the answers they are not wrong. You saw a board into two pieces with one cut and that takes 10 minutes. You want to saw another board into three pieces (two cuts) so that will take 20 minutes.

This School Math Problem About Pizza Is Annoying Reddit

How would you have answered?

How long will it take Marie to saw another board into 3 pieces?

Thank you @intangible for the detective work. My friend sent me those two images and they are funny and sad at the same time.

The boardb sawing question is a good interview question. I bet anyone 10 bucks at least one out of five will give you crazy answer.

I can cut it in 3 pieces in under 10 mins.
Say Marie cuts across the board of length x, I make 3 diagonal cuts at the corners of total length less than x😂

Actually if you look at the answers they are not wrong.

Both kids are right and that’s what makes it so sad.

Harriet doesn’t get the drift😀

People just automatically assume the kids are wrong because it’s not a canned answer. A coworker of mine was complaining to me about this whole common core stuff at his daughter’s school. Looks like the teacher needs to get additional training too. 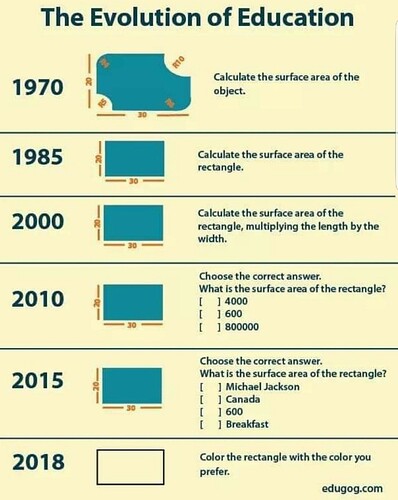 That’s a white joke. Not something a colored person like you should be passing around.

This takes the cake. Math is apparently a racist concept designed to oppress minorities.

Why is American math education so abysmal? Why don’t they make it more like math education in Asia and Eastern Europe that involves proofs and problem solving?

There are already some very good answers, but I wanted to mention a few historical milestones that help see why.

In 1980, President Jimmy Carter created a new Department of Education. It had more power than when its functions were within the Department of Health and Human Services. That power could be used for good… or for evil. Carter meant well, but, like many of his well-intentioned ideas, this one did not work out well.

“New math” was the name of an attempt in the 1960s to introduce more contemporary topics into secondary school curriculum — “baby” versions of set theory, symbolic logic, or modern algebra. This multiple choice question is sometimes cited as an illustration of what was wrong with the “new math”:

Which of the following is NOT a set?

The answer the teachers looked for was (c), this is not a set because it does not have {}’s…

In my opinion, the biggest reason why the “new math” failed was that U.S. school teachers did not have an opportunity to learn the new material that they were asked to teach. The material was not that hard (baby set theory? Come on) and most of them would have been able to teach is with just a little training.

The “new math” fizzled out and disappeared almost without a trace by 2001, when the “No Child Left Behind” Act mandated for the first time a national curriculum much more uniform than before. The schools were forced to “teach to the test”. Any material that would not be on the test was no longer important. For example, global studies (aka geography) were not important. Proofs that were not on the standardized math test were not important. Schools that used to teach proofs mostly stopped in order to focus on preparation for the standardized tests.

Unfortunately, the math curriculum that was tested by the standardized tests focused heavily on pre-electronic computer arithmetic skills. Students were taught to carry out arithmetic calculations without necessarily understanding what they were doing or why. Until 1950s, this might have been valuable vocational training. Someone skilled at “long division” might get a job as a “human computer”. But the appearance of electronic computers rendered the ability to compute manually without understanding worthless by 2001. The NCLB curriculum was a giant step backwards for all schools, but especially for those few that had been much better than average.

The math portion of the Common Core curriculum that the Obama administration introduced in 2010 was neither perfect, not at all original — it was a ripoff of UK’s National Numeracy Strategy, created in the 1990s to address exactly the same problems in the UK that NCLB made worse in the US in 2001. Instead of calculating stuff without understanding (pre-electronic computer vocational training for bank clerks), students were taught to understand stuff, and were eventually tested on their ability to explain stuff and demonstrate their understanding. It was still much better rhan the NCLB one. Sadly, the administration has done a terrible job selling Common Core to the public, resulting in its abandonment. Many parents complained that their kids were not learning “calculations without understanding” (such as “add with carry” without understanding in early grades). Teachers complained that they did not know what they were supposed to teach and how. Now we’re basically back back to NCLB…

The failures of the “New math” and of the Common Core illustrate the difficulty of adding anything to the curriculum. If the next administration wanted to add, for example, geometry proofs in middle school, or other math material taught in many other countries, then the Department of Education would need to figure out a way to add them to the standardized tests, the teachers would need to be taught how to teach to this test, and then most students would learn it.

I now have some experience with the Common Core math curriculum, after going through and helping with my kids’ math homework. I used to hear all these horror stories about Common Core, mostly from other Chinese parents I think, how it’s watered down math and too easy for their kids. However, my opinion changed completely after going thru my kids’ homework. IMO they are closer to real math, i.e. the stuff a math major would tackle in college. Instead of teaching rules to do fast computation, like memorizing the multiplication table, they would teach you what 8x9 means, and how it’s the same as 4x18 and so on.