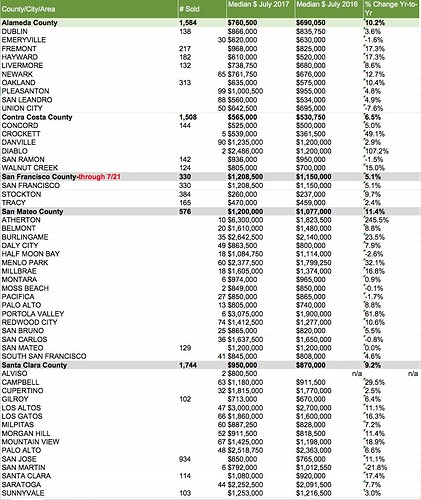 Mountain View is on fire. I’ve noticed many basic 3/2 SFHs in mountain view going for 2+ in the last few months.

Median price can be misleading because if more expensive houses sold, it will go up, similarly more less expensive houses sold, it will go down. Same effect for number of re-modeled houses. Some cities are fairly big like Sunnyvale, the hot zip code is 87 + those near to Apple Park, so you can have hot zip codes making new highs while not so desirable zip codes doing not so well, overall would be very different from individual zip codes.

San Jose is a good example of what you’re saying.

overall would be very different from individual zip codes.

$ per sq ft is usually good but even that’s iffy in the bay area where so much of the value is the land.

Useless data. I compile my own list according to zip codes. Much more insightful.

$ per sq ft is usually good but even that’s iffy in the bay area where so much of the value is the land.

Trulia has the Average $/sq ft by zip code. 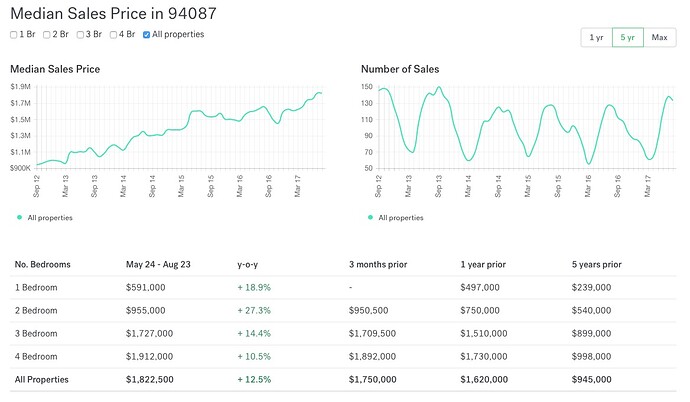 We said no to MV / Sunnyvale, and moved up to sf…

SF felt cheap even back in March. It must feel much more so now.

Yes, Fearless Leader, the world is going to stop because of a freaking algebra class…LOL!!!

That’s like saying America’s home value will suck going forward because China is turning into the next superpower. Come on, get a grip!!!

Joke aside, sf startups better hustle up, otherwise we might get stuck here for long. Only after 5+ yrs of boom cycle did SFO finally do some renovation in domestic terminals. That’s how slow infrastructure developments take… If we slow down now, we may never see the end of transbay, more homelessness, yadi yada…

Actually SF as a whole may be fine. Sunset will suck going forward.

We are seeing the homeless because of the weather… it’s too good. You don’t see any homeless in New York because they’ll freeze to death in the winter… Hawaii actually has even more homeless than SF.